With the US out on holiday, there’s not much point in discussing the dollar today. Instead, let’s focus on something that could move during the Asian hours. The Japanese yen.

After being the weakest of major currencies for an extended period this year, the yen has stormed back against the dollar, along with equities, gold and other risk-sensitive assets. Wednesday’s publication of less hawkish Fed minutes and weaker-than-forecast US business activity data further fueled speculation the Fed is going to slow down its rate increases and potentially pause in early 2023.

As the USD/JPY slumped, other yen pairs have started to move lower with it – including the EUR/JPY – albeit to a much lower extent. This is because nothing has changed in terms of the Bank of Japan’s ultra-loose monetary policy (and recent intervention by the Japanese government). Thus, the USD/JPY has been hit because of dollar weakness than yen strength.

In terms of the EUR/JPY, it is true that the euro carries some positive yield over the yen. With the ECB determined to get the 10% inflation back down by aggressive rate increases, the disparity between Eurozone and Japan monetary policies are likely to grow larger over time. This is something that should help provide a floor for EUR/JPY in the long-term outlook.

But in the short-term, especially with the USD/JPY moving lower, we could see some weakness in the EUR/JPY and other yen pairs. Also, much of the interest rate disparity is already priced in. And with the eurozone economy on its knees, there is a risk that the ECB might end its hiking cycle quicker than expected, reducing the appeal of the single currency over the safe-haven yen.

The EUR/JPY actually formed a bearish engulfing candle on the daily chart on Wednesday, and we saw some downside follow-through today. The selling then came to a pause as rates tested support and the bullish trend of the triangle pattern around 143.80. 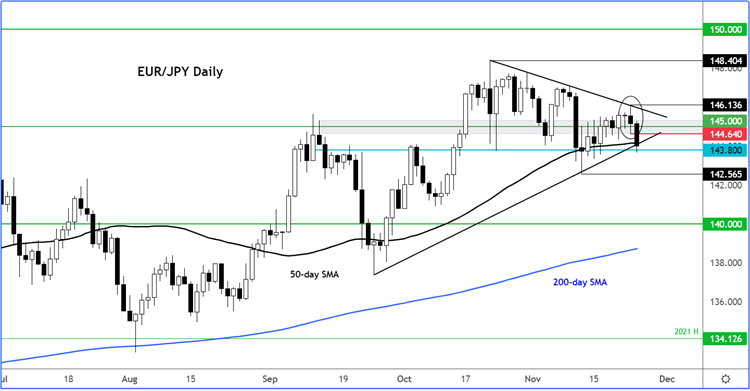 Thus, conservative speculators may wish to wait for price to break out of this triangle consolidation pattern and trade in the direction of the breakout.