EUR/USD: all bears need now is a ‘lower low’

The EUR/USD has been trending lower in recent weeks and the selling pressure has accelerated over the past few days as the investor focus has returned to the interest rate differential between the US and Eurozone economies. Whereas the Fed has signalled that it is ready to hike rates later this year, the ECB has only recently started QE and there were no suggestions from President Mario Draghi today that the bank is ready to trim or end the €60 billion a month stimulus programme early. In fact, Draghi said the ECB has temporarily increased emergency funding to Greek banks by €900m. Thus, the ultra-accommodative monetary policy is here to stay for now and this should in theory put downward pressure on European bond yields, which in turn could depress the euro even further.

From a technical point of view, the EUR/USD has now made two clear lower highs. Though it has also made some minor lower lows, it is yet to make a distinct one. But that could change if it breaks the June low of around 1.0820. As the 61.8% Fibonacci retracement of the rally from the March low, at 1.10845, is also not too far off he June low, this makes 1.0820/45 a key support area. Thus a break below here could see the remaining bulls bail out on their positions. This could lead to further follow-up technical selling. Unsurprisingly, the momentum indicator MACD is trending lower and is below zero, suggesting the bears are in in full control.

Meanwhile resistance comes in around 1.0915 and then at 1.0980. The short-term bias would remain bearish for as long as the sellers defend the downward-sloping trend line. If broken, we may see a sharp short-squeeze rally. The odds of that happening are very slim, however. 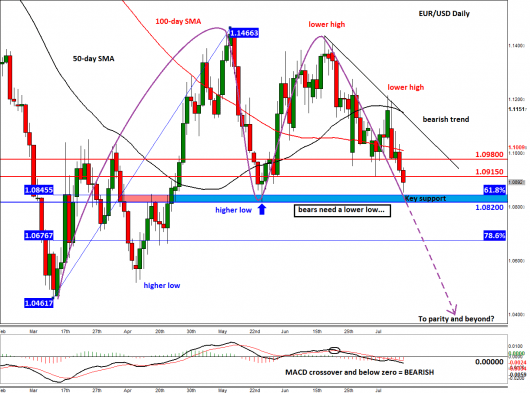