EUR/GBP: Fed is not the only rodeo in town

While all traders are (justifiably) hyper-focused on the Federal Reserve’s highly-anticipated meeting, it’s worth noting that the Fed is not the only rodeo in town. Before that fateful Thursday afternoon, traders will get a raft of data out of both the UK and Eurozone.

Beyond today’s shockingly weak Eurozone ZEW economic sentiment report (just 33.3, year-to-date low, vs. 42.1 expected), the market will also get a look at the final Eurozone consumer price index (CPI) report from August. With the European Central Bank (ECB) seemingly moving toward a more accommodative posture and potentially looking to expand its Quantitative Easing (QE) program, any revisions to the 0.2% m/m flash reading from the beginning of this month could have an outsized impact on the euro. In addition, a hotly-contested election is expected this weekend in Greece, with former Prime Minister Alexis Tsipras’ Syriza party running neck-and-neck with the New Democracy party.

Across the English Channel, the UK will release its monthly jobs report tomorrow morning. Economists and traders expect a 5.1k decrease in unemployed Brits and the unemployment rate to hold steady at 5.6%, but the change in average hourly earnings will be arguably the most important aspect of the report. Wages are expected to rise at 2.5% annualized rate, up from 2.4% last month, and like the Federal Reserve, the Bank of England views lackluster price pressure as the primary reason to hold off on raising interest rates. In addition to that marquee release, the UK Office for National Statistics (ONS) will release the August retail sales report Thursday morning, with traders anticipating another subdued reading at just 0.2% m/m.

With all this top-tier economic data scheduled for release, we could be on the verge of a big technical breakout in EUR/GBP. The unit has been consolidating below major previous resistance at .7390, as well as the 200-day MA for three weeks now, forming a potential cup-and-handle pattern. Meanwhile, the 14-day RSI indicator has been trending consistently higher for over two months, showing a clear shift to buying pressure of late.

If this week’s economic data is euro-supportive and pound-negative, EUR/GBP could break conclusively above the .7390 level. In that case, a continuation toward .7500 or .7600 could easily be in the cards for the normally-staid currency pair. On the other hand, generally negative reports for EUR/GBP could push the pair down; a break below the “handle” low at .7240 would be a very bearish development and could expose .7100 or even the bottom of the recent range under .7000 next. 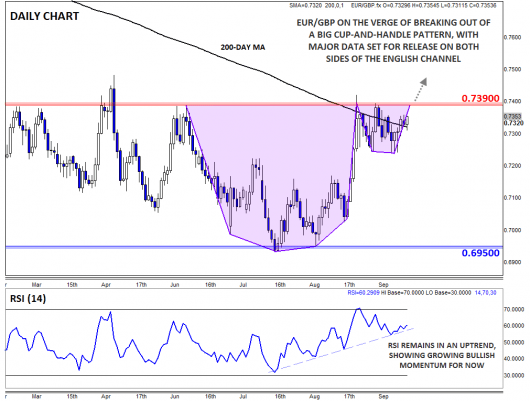