After last week’s major economic data in the developed world, including the highly-anticipated ECB meeting and US Non-Farm Payroll report, some traders may shift their focus back to emerging markets this week, where by far the biggest star (as always) will be China.

Tomorrow (technically later tonight in the US), China will release its trade balance data for November. While traders forecast that the net trade balance (exports minus imports) will tick higher to 395B yuan, both imports and exports are expected to fall further, reflecting a generally slowing economy.

The following day, traders will get their first look at November’s inflation figures (01:30 GMT); in what’s become a gaping chasm of a divergence, consumer prices (CPI) are expected to tick higher by 1.3% y/y while producer prices (PPI) are actually expected to fall by 5.9% y/y.Regardless of which measure you look at, price pressures in the world’s second-largest economy are essentially non-existent, potentially making the case for easing from the PBOC.

Rounding out this week’s major Chinese data will be the monthly releases of Industril Production, Fixed Asset Investment, and Retail Sales figures on Saturday. Despite policymakers’ best efforts, China remains primarily a manufacturing-based economy, so the Industrial Production figure will be the most closely watched release. Last month Industrial Production hit its lowest rate since the Great Financial Crisis at 5.6% year-over-year and another subdued 5.7% reading is expected this weekend.

This is usually where we’d insert our standard disclaimer that China’s currency is not free-floating, so technical analysis tends to be less effective, but the country also decided to shift its exchange rate policy to a more market-determined rate in August, so those concerns are fading, especially now that the renminbi is part of the IMF’s SDR basket.

The SDR-acceptance rally was extremely short-lived and USD/CNH has now resumed its near-term uptrend to hit a new three-month high as at 6.47 as we go to press. Meanwhile, the MACD indicator continues to trend higher above both its signal line and the “0” level, showing strong and growing bullish momentum. From a technical perspective, the pair may have room for further upside toward the 61.8% Fibonacci retracement around 6.49 or even the 78.6% Fibo at 6.53 if this week’s data disappoints. Only a break below the bullish channel would call this near-term bullish bias into question. 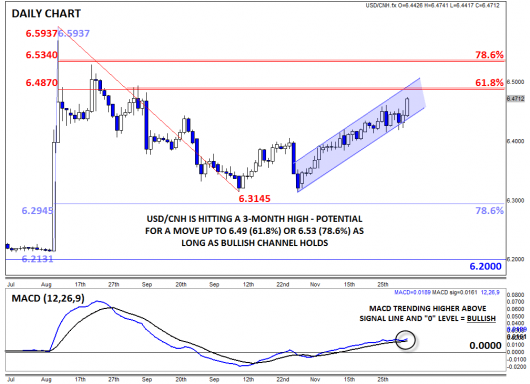