While there are a few top-tier economic events in the G10 this week (RBA minutes and CPI tonight, the RBNZ’s monetary policy meeting on Thursday, UK retail sales on Thursday, and Eurozone PMI figures on Friday), FX traders may want to turn their attention to emerging market currencies for a trifecta of central bank decisions this week.

Hungary’s Maygar Nemzeti Bank will kick off the action tomorrow morning, and it looks likely to continue its cycle of (mini) rate cuts. After a pause through the second half of last year and Q1 of this year, the central bank has lopped off 15bps from its benchmark interest rate at each of its last four meetings. Some analysts expect a 10bps cut this week, but in the grand scheme of things, forward guidance on the path and eventual target of interest rates is far more important than the difference between a 10bps and 15bps cut. Readers trading the Hungarian forint should keep an eye on 290 resistance in USDHUF and possible 100-day MA support at 306 in EURHUF.

USDTRY: No Change Likely, All Eyes on CBRT’s Inflation Assessment

The Central Bank of the Republic of Turkey (CBRT) will conclude its monetary policy meeting on Thursday, and analysts are unanimous in expecting no change to any of Turkey’s three main interest rates. Assuming there’s no big surprise, the most market-moving aspect of the meeting will be the central bank’s assessment of inflation, which recently dipped to a 2-year low of “just” 7.2% annually. If the CBRT is optimistic on the prospects for the Turkish economy, USDTRY could dip back toward previous support at 2.64, while a more pessimistic outlook could take USDTRY through its bearish channel and up toward 2.75 next (today’s big breakout in the RSI indicator hints at this possibility). 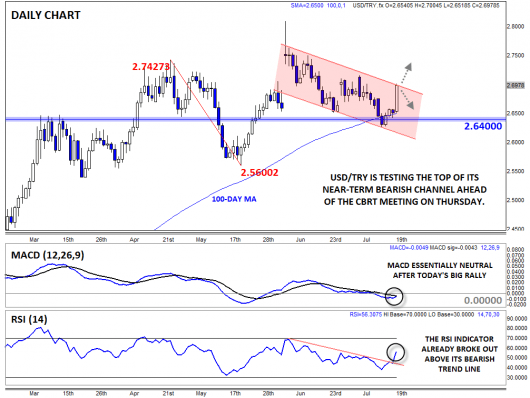 USDZAR: Will the SARB Start its Hiking Cycle on Thursday?

Far more than its 30° E longitude rival to the North, South Africa’s central bank has a very tough decision on Thursday. Analysts are roughly split on whether the central bank will kick off its hiking cycle on Thursday, with most of the rest anticipating that the SARB will hold off until September. In our view, there are three scenarios that could play out at the meeting. From our perspective, the most likely outcome is that the SARB will start hiking rates, which would presumably be bullish for the rand. Alternatively, if the SARB holds off, but heavily hints at a rate hike in September, the rand could hold steady with USDZAR continuing to consolidate below 12.60 resistance. Finally, if the central bank is dovish and fails to foreshadow a September hike, USDZAR could rally though 12.60 resistance to a new 13.5-year high.