ECB members turning more hawkish. But do markets believe them?

Governing Council member of the ECB Klaas Knot said that the ECB should raise interest rates in July by 25bps, but a 50bps hike should not be excluded if data suggest that inflation is rising.  Money markets immediately jumped to pricing in roughly 105bps worth of ECB rate hikes by yearend (from 95bps). These are the most hawkish comments from an ECB member yet as rising inflation has caused many ECB members to comment on the possibility of raising interest rates sooner rather than later, despite concerns about how the Russia/Ukraine war will affect growth.  The stance from ECB President Christine Lagarde seems to be that the ECB should wind down the Asset Purchase Program in Q3 and then possibly raise rates “a few weeks later.”

EUR/GBP had been in an orderly downward channel since April 2021 as price moved from 0.8719 down to 0.8203.  However on May 5th, price broke above the top trendline of the channel as the BOE set the wheels in motion regarding the idea that growth will be slower and inflation will be higher, or stagflation.  Since then, the more hawkish ECB comments commenced.  However, on May 12th, EUR/GBP formed a bearish engulfing pattern near 0.8600 and has moved lower each day since, including moving back into the long-term channel.  Today, after the Knot comments, price held support at the 50 Day Moving Average near 0.8393 (inside the channel) and closed higher, forming a hanging man candlestick (a one-day reversal pattern).  Will EUR/GBP move back outside the channel towards the recent highs? 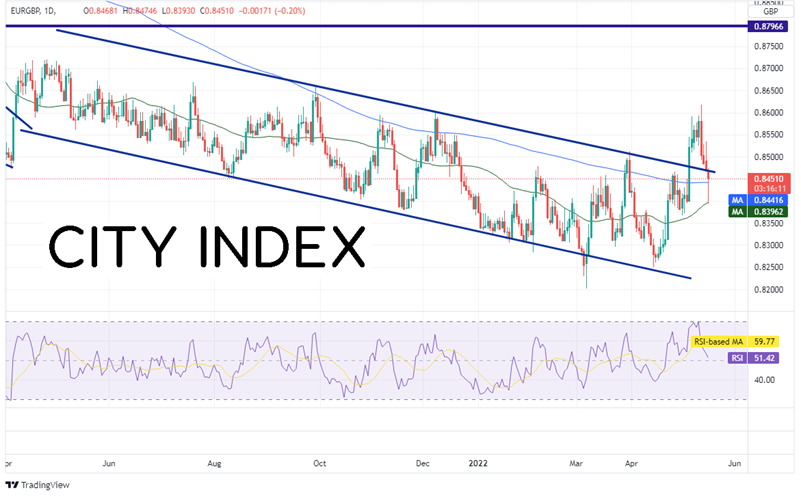 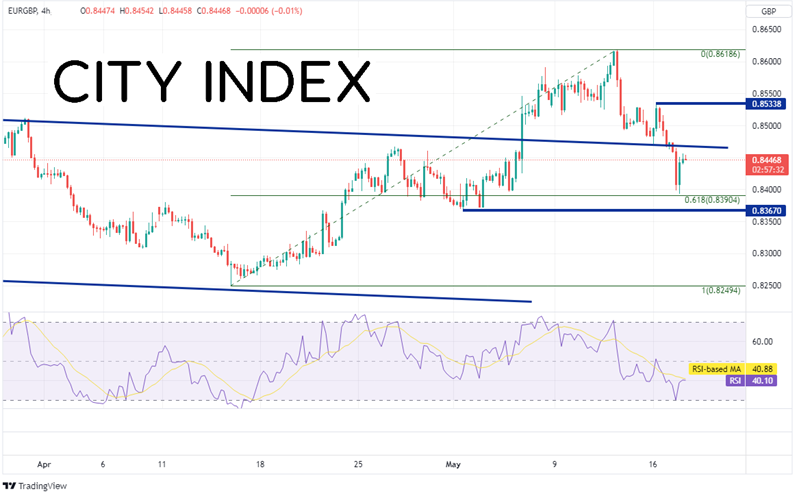 The ECB is providing more hawkish comments while the BOE is less sanguine due to slow expected growth. This may lead traders to assume that EUR/GBP is moving higher. However, over the last 4 days, the pair has moved lower.  Traders will be watching to see if today’s hammer on the daily timeframe is enough to mark a near-term bottom and allow the pair to go bid!