Dollar in the Red Despite US GDP Beat

By :
Fiona Cincotta
,  Market Analyst
US GDP jumped 3.2% in the first three months of this year, well ahead of the 2% that analysts had been predicting and the 2.2% growth of the 4th quarter last year.


Whilst the dollar pared earlier losses versus a basket of currencies it remained in negative territory. The market is still pricing in a 50% probability of a rate cut by the end of the year. This tells us that traders do not believe that this level of growth will be sustained.


Traders are looking beyond the headline figure here, delving deeper into the numbers and the inventory build up will have to start unwinding. This will drag on growth in the future and explains the so-so reaction from the market on such a spectacular beat.


Adding to concerns, the PCE index increased by just 0.6% in the first quarter, after increasing by 1.5% in the final quarter of last year. This slowdown in inflation is concerning investors.

US inflation up next
Attention will now turn to US PCE due for release on Monday. The inflation measure preferred by the Fed will provide investors with further information as to whether the Fed’s accommodative monetary policy is necessary across the year.


The core PCE is expected to have slipped to 1.7% year on year in March, down from 1.8% in February. The would take inflation further away from the Fed’s 2% target level last achieved in December. Should PCE pull further away from the Fed’s 2% target, which is a possibility given the PCE index in today’s report this would lead to the assumption that the Fed is likely to keep rates on hold for the rest of the year, or even chose to cut them should the GDP slow sharply.


The dollar has been ripping higher versus all major currencies. However, the dollar is snapping a three-day winning streak heading into the weekend. That said dollar index continues to trade close to a 22-month high at 98.00.  Weak inflation data on Monday could see the dollar extend those losses. 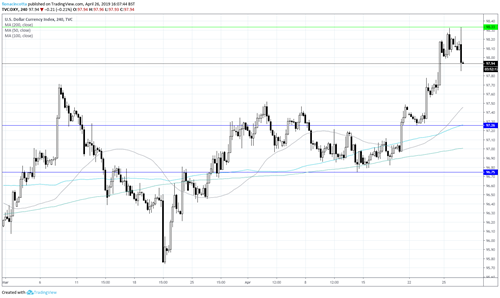