Disappointing ECB kicks the can to June

In the press conference, Christine Lagarde noted that downside risk to growth increased substantially due to the Russian/Ukraine war and that war could further worsen supply side contracts.  Lagarde also said that upside risks to inflation have increased, in particular the risk of higher energy prices.   Note that inflation for March came in at 7.5% YoY for March vs 5.9% in February.

EUR/USD sold off immediately upon the release of the ECB Monetary Policy Statement and again during the press conference.  EUR/USD was trading near 1.0916 before the statement and nearly 2 hours later had reached an intra-day low of 1.0757. 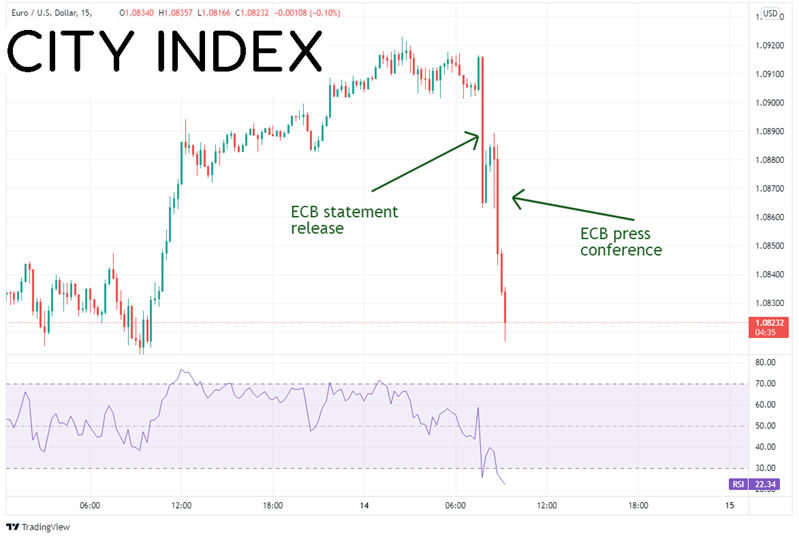 On a daily timeframe, EUR/USD has been moving lower in a channel formation since May 2021.  On the zoomed in chart, price is consolidating around strong trendline support (green trendlines).  One trendline dates to January 2017 and the other dates to October 2020. After today’s meeting, EUR/USD has given back all of yesterday’s gains, and is attempting to form a bearish engulfing candlestick, in which price makes a high above the previous days close and closes below the previous day candle’s open.  Price also has taken out the lows of March 7th at 1.0806.  Horizontal support sits at 1.0727, which dates to April 2020 and 1.0636, which dates to March 2020.  Resistance is at the day’s high of 1.0923, then horizontal resistance at 1.0945.  Above there, price can move up to the 50-Day Moving Average at 1.1102. 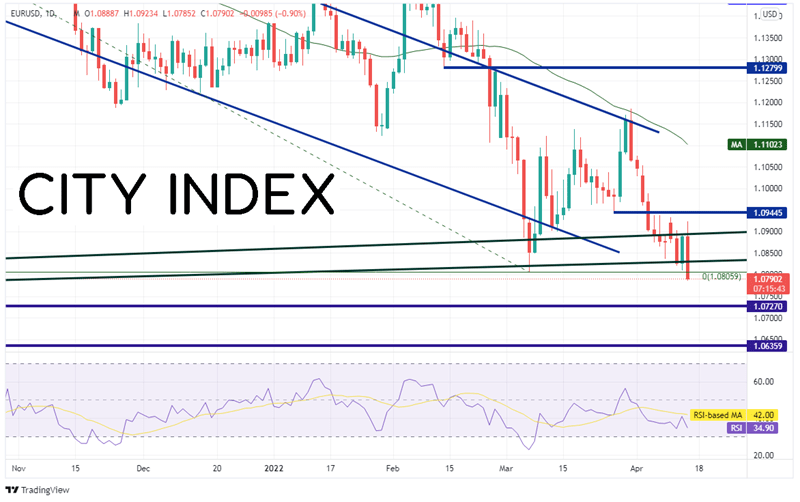 After last month’s meeting, in which the ECB moved forward the end of its Asset Purchase Plan to Q3 from Q4, investors were hoping for a timeline as to when the central bank may begin it Quantitative Tightening.  They were severely disappointed. Despite higher inflation, the ECB maintained its path for asset purchases and offered little new guidance.