DAX on edge with all eyes on ECB and Lagarde

By :
Fawad Razaqzada
,  Market Analyst
The European Central Bank’s forward guidance and signals from President Christine Lagarde is going to cause sharp moves in the euro and stock markets today. Undoubtedly, Lagarde will be pushed for answers on the prospects of a 50-basis point rate hike in July. With current market pricing of around 36 basis points, we will get a binary reaction depending on whether she downplays it or not. If Lagarde does not rule out a 50 bp hike, then this will be considered a hawkish outcome, which should then lead to a sharp rally for the euro, and possibly a bearish reaction in the stock markets.

All about forward guidance

Just to be clear, no one is expecting any hikes today, and the ECB wouldn’t want to cause any unwanted appreciation of the single currency by making a surprise decision. However, their forward guidance regarding rate hikes from July and onwards should move the euro as mentioned. It is all about whether the ECB will follow other central banks in signalling a 50-basis point hike, or a more standard 25. If we hear hints that it will be the former, I would expect to see a sharp rally in the EUR/USD, EUR/CHF and other euro crosses.

DAX in consolidation mode ahead of ECB

A couple of hours before the ECB announcement, the DAX index was testing key short-term support around 14290, where the 21-day exponential moving average also comes into play. The German index has been stuck in a range with price action being quite choppy of late, mirroring most other global indices. It is possible that a hawkish ECB could send the DAX down to the next level of support around 14105 – the base of the previous breakout and head of the doji candle from May 25: 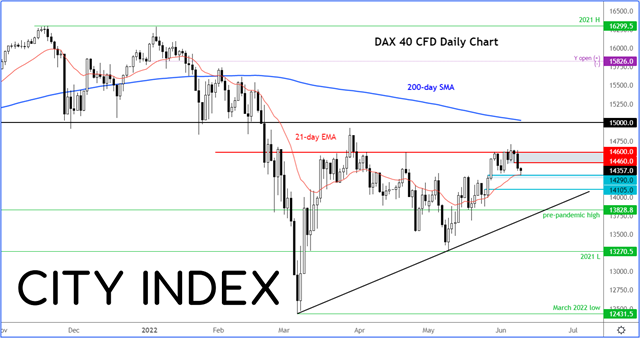 Meanwhile, resistance is now seen around 14460, followed by 14600. If these levels are cleared then there is little further resistance seen until 15000, where the 200-day average is also converging.

Inflation is the problem in the Eurozone, not an overheating economy. This is what is forcing the ECB to take action. CPI inflation rose to a fresh record of 8.1% in May, accelerating from 7.4% in April and well above expectations of 7.8%. Inflation has gotten very hot, with the war in Ukraine exacerbating rising food and energy costs.
But surprisingly, the Eurozone economy grew much stronger than initially estimated in the first quarter. According to revised figures from Eurostat, the eurozone expanded by 0.6% in Q1 rather than 0.3% initially estimated. That said, German data releases throughout the second quarter has been quite dire. Growth has therefore likely slowed down sharply in Q2, with Germany on the brink of a recession.
So, if the ECB decides to go ahead with an aggressive hiking cycle from July despite a weak economy, then this may prevent the DAX from rising towards its all-time highs in the months ahead. Money markets have been betting that the ECB will pursue a more aggressive hiking cycle. Following Tuesday’s surprisingly strong GDP data, they are now expecting 200 basis points worth of ECB rate hikes by May 2023, mirroring hawkish sentiment from ECB members over the last month.  Some members have been talking about raising rates by 50bps, which is something that could be confirmed today.

You can trade with City Index by following these four easy steps:
Open an account, or log in if you’re already a customer
Search for the company you want to trade in our award-winning platform
Choose your position and size, and your stop and limit levels
Place the trade
Related tags: Trade Ideas Stocks Indices Dax