China’s producer prices fell to a 6-month low of 9.1% (down from 10.3%) and consumer prices softened to a four-month low of 0.9% y/y. Not only does this show that inflation remains significantly lower than that of the west, it also shows inflation in China is out of sync whilst prices continue to soar in US and Europe. And that points to headwinds for growth in China and the likelihood of further stimulus to compensate. 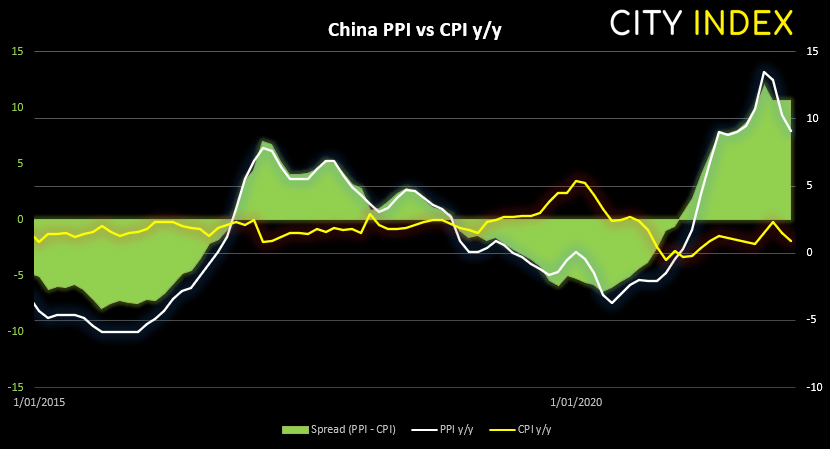 China’s Metaverse to the rescue?

One potential area for growth in China is the Metaverse, although China’s efforts to catch up to the likes of the US and South Korea have been criticised. However, things are slowly taking a turn for the better with large companies such as Alibaba and Tencent being just two of the hundreds which have applied for metaverse-related trademarks over the past year. Furthermore, China’s Metaverse Industry Committee (CMIC) added an additional 17 new firms to its membership today according to its website. Three of the 17 companies are listed companies which include Inly Media, Beijing Topnew Info&Tech and Beijing World Online Network Information. The state-backed committee was inaugurated in October and is China’s first metaverse industry group.

The Hang Seng is yet another market experiencing choppy trading conditions. A mixture of conflicting headlines involving geopolitical warfare (Russia), monetary policy easing (PBOC) and earnings reports has seen volatility rise for global indices and the Hang Seng has not escaped the fun. Yet we continue to argue that it has held up pretty well overall and still shows the potential to break higher.

As we can see in the table above, the mega-cap companies have struggled and this can seen the broker index suffer. Yet Alibaba (BABA) appears set to break above last week’s high and Tencent may have carved out a swing low at 466. And with sentiment improving on news that Russia could be set to withdraw troops from the Ukrainian border it provides hope that global sentiment for equities could also improve.

Since our previous analysis, 23,600 support held around the 61.8% Fibonacci ratio before prices gapped above 24k. Whilst prices pulled back form 25k, a Doji formed above the gap and marks third higher low since December. With sentiment for equities improving out initial target is the highs around 25k which is likely to be a pivotal area if tested. But to expect a break above it we really need to see more of the top five stocks also rising in tandem.