BOJ could act on Friday, but it may not matter

BOJ could act on Friday, but it may not matter

The BOJ has been providing monetary stimulus to Japan for years in the form of negative rates, ETF buying, and yield curve control (bond buying).  Since the pandemic, the extraordinary stimulus has only increased. After years and years of support, the Bank of Japan (BOJ) begins another 2-day meeting review on Wednesday.  On Friday, they will release the results of their findings.  Currently, the BOJ owns nearly $450 billion worth of Japanese ETFs. With stock markets at their highest levels since the 1990s, the BOJ must find a way to communicate to the markets that they are willing to do “something”, while not considering it tapering.  They could announce a reduction in the amount of ETFs they buy, but that may be a bit less dovish than they want to sound.  A more likely scenario, as had been mentioned by the BOJ last week, is to seek a freer yield fluctuation around the zero target on the 10-year JGB.  The current range is 20 bps in either side.  This would allow them to do “something”, without signaling too much.

USD/JPY has been highly correlated with the US 10-year yield.   On a daily timeframe, the correlation coefficient between the US 10-year yield and USD/JPY is currently +0.91.  A reading to +1.00 means that the two assets are perfectly correlated and move together on a one to one basis.  USD/JPY has been moving together with 10-year yields in an orderly, upward sloping channel since the beginning of 2021.  On March 4th,  the pair broke above the channel and is testing a downward sloping trendline (red) dating back to June of 2015!  On Monday, price put in its highest level since June 2020 near 109.36 as the RSI began to diverge in overbought territory. The pair has room to pull back to let the RSI unwind.  There may be some profit taking ahead of both the FOMC on Wednesday, as well as the BOJ meeting on Friday.  Support is at horizontal resistance near 108.16.  Below there is the top, upward sloping trendline from the channel near 108.70.  However, even if price pulls back to the 38.2% Fibonacci retracement from the January 6th lows to the yesterday’s highs, near 106.74, the longer-term daily trend would still be higher.  If bulls decide to push USD/JPY higher, first horizontal resistance above yesterday’s highs is 109.85. 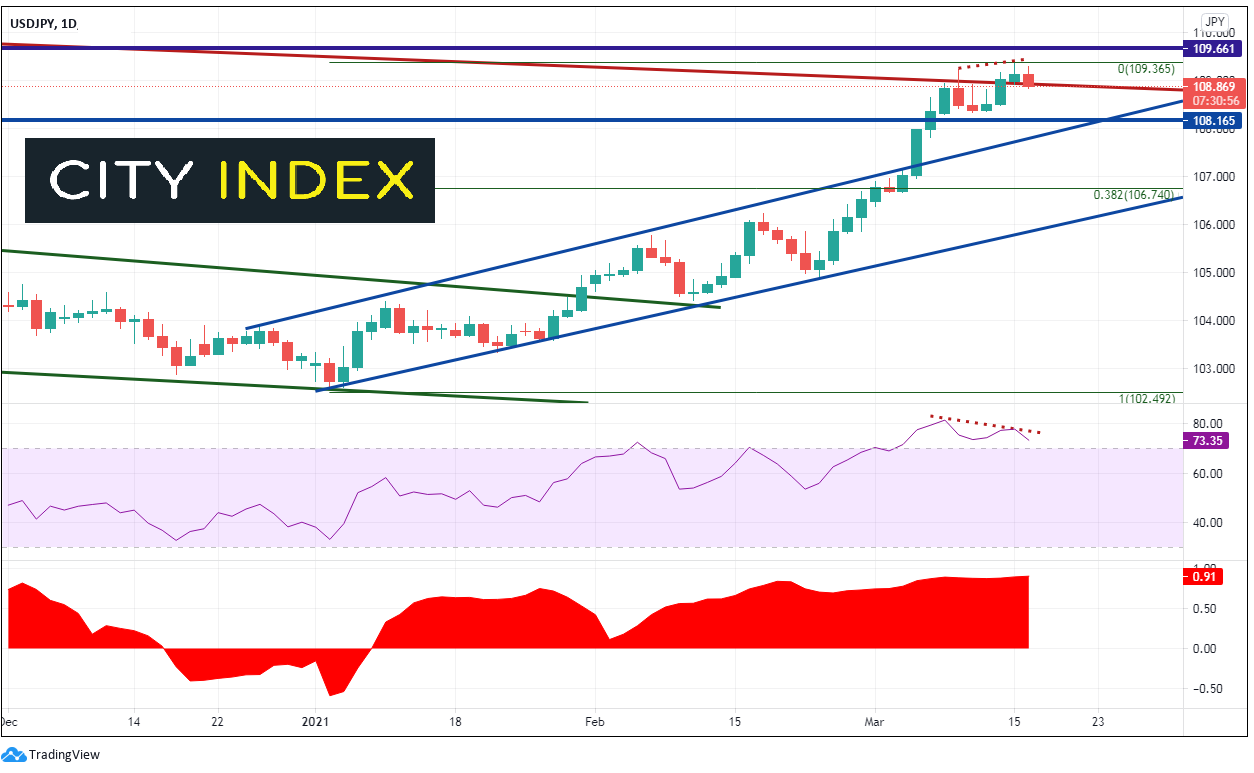 USD/JPY could see a pullback over the next few days ahead of the FOMC and BOJ meetings.  However, whether or not the BOJ does anything, may not matter.  USD/JPY price action ultimately could be about the FOMC outcome and the resulting move in US 10-year interest rates.