Bank of England’s “steady as she goes” approach to interest rate hikes (25 basis points) has been heavily criticized while other major banks have been more forceful in their approaches to tacking inflation. While this period of inflation was never going to be kept under control by the BoE, critics argue it could have been a little more tolerable had the BoE been more aggressive and quicker in hiking interest rates. Consumer inflation in the UK has repeatedly surged to fresh multi-decade highs and now stands at a new 40-year high of 9.4%. Will it finally join the rest of central banks with a bigger hike of 50 basis points this time?

Ahead of the BoE decision, the GBP/USD has established a base around low $1.20s. I reckon it will be able to recover to mid-$1.20s as the dollar potentially weakens further in the coming days.

What are analysts expecting about BoE’s rate decision?

Economists expect the Bank of England to hike interest rates by 50 basis points to 1.75% from 1.25%, in light of hawkish commentary from Governor Andrew Bailey. The markets are also almost fully pricing in a 50 basis point hike on Thursday, and about 100 more by February 2023.

A lot will depend on the forward guidance and vote split – see below for more. In terms of the rate decision itself, a 50-basis point hike is expected and as such won’t come as surprise. But if the BoE once again opts for 25 bp hike, this will surprise the markets and could send the pound tumbling back to $1.20.

Size matters, but so does the vote split. In June, the MPC had voted 6-3 in favour of a 25bp hike, although this time Governor Bailey will be pushing for a 50-basis-point move, which means all those 3 hawks who had dissented in June, will be happy this time.  Still, the decision to hike by 50 basis points is unlikely to be unanimous in my view, given that there are doves in the BoE camp such as Silvana Tenreyro and Jon Cunliffe. So, we are probably looking at a 7-2 or 6-3 split in favour of 50 bp hike.

If the BoE’s policy statement echoes that of Federal Reserve and Reserve Bank of Australia to give it more flexibility on policy, then the pound could fall. So, watch out for a statement in the lines of “the size and timing of future hikes will be guided by the incoming data.”

However, if the BoE is more explicit in terms of acting forcefully to tackle 40-year-high inflation, then this could see the pound make more ground against the dollar and euro.

What else will be driving GBP/USD?

The US dollar has regained some ground after coming under pressure in the last few weeks as the markets have been re-pricing future interest rates hikes from the Federal Reserve lower. This is because concerns about inflation have diminished with a number of key commodities, which had fanned inflation, have now fallen sharply. What’s more, economic data from the US has also started to deteriorate somewhat, raising concerns over the world’s largest economy. So, it is possible that even if the BoE is not very hawkish, the GBP/USD might still find support because of weakness in the dollar than strength in the pound.

The rate statement will be released at 12:00 BST today. Governor Andrew Bailey’s press conference will start 30 minutes later at 12:30 BST.

Once the impact of the BoE’s rate decision fades, GBP/USD traders will then look forward to Friday’s publication of US non-farm payrolls report. US jobs reports have not been having the same impact on the markets because the focus has been on inflation and the economy. But if we start to see weakness in employment again, then this might worry some investors about the health of the world’s largest economy.

As such, we could see the GBP/USD climb towards the resistance channel of its bull channel: 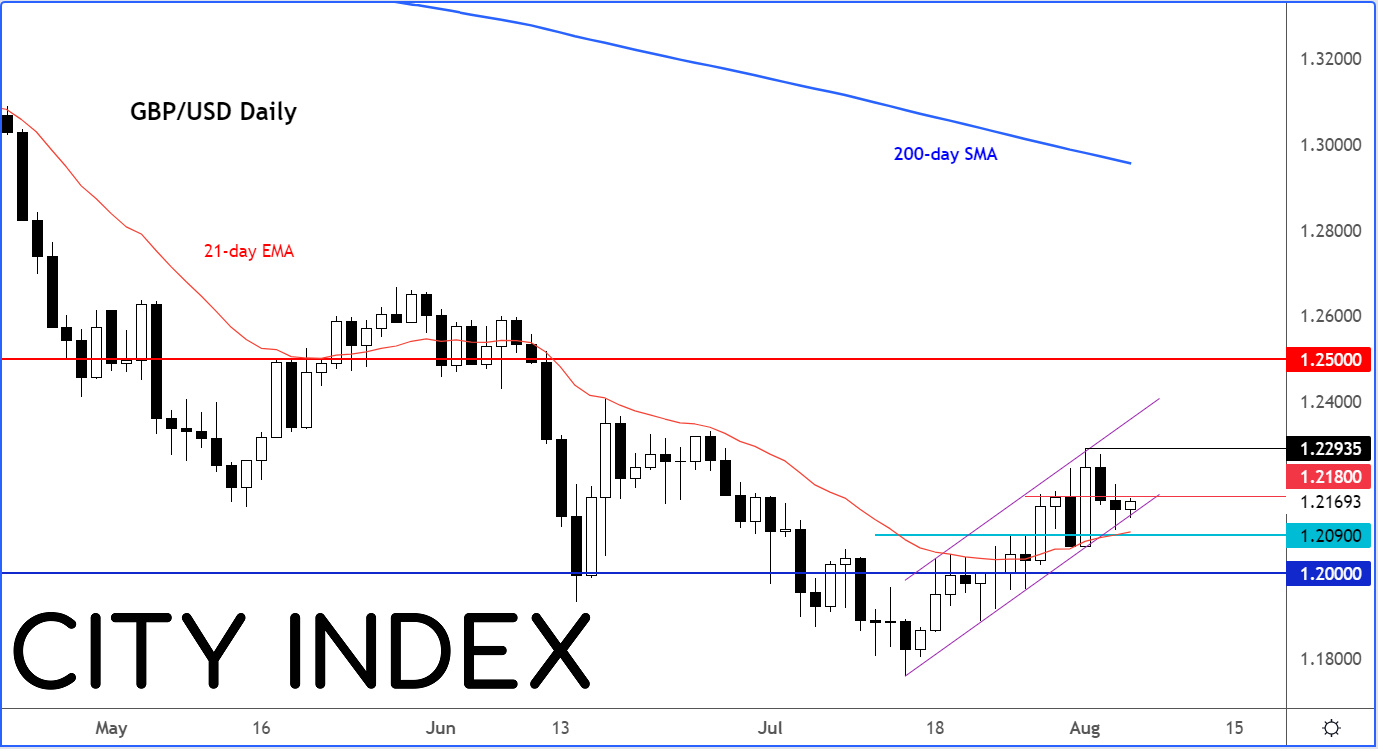 On Wednesday, the GBP/USD had dropped to test key support around 1.2100 following the publication of stronger US macro data. But as mentioned yesterday, we did see a nice bounce from here as FX traders were reluctant to push rates below this key technical area meaningfully with the Bank of England rate decision looming. What it does next will now depend on how hawkish or otherwise the BoE will be today.