Bank of Canada Rate Decision - Will They Cut Tomorrow?

Bank of Canada Rate Decision - Will They Cut Tomorrow?

A few weeks ago, we had been monitoring the Bank of Canada and wondering if it was time for them to jump in the pool with the rest of the major central banks around the world and begin cutting rates, or at the very least, turn dovish.   Major data points for Canada up until this Friday, had been better than expected, as the July Inflation Rate (MoM) was 0.5% vs 0.2% expected and the July Retail Sales (MoM) was 0% vs -0.1% expected.  Even GDP was better on Friday.  However, also on Friday we saw the first dents in the armor, as PPI and Raw Materials came in much worse than expected.  These are considered leading indicators of the economy, as they are the first price component which later gets passed through to the consumer.

The last BOC Policy Interest Rate Decision was on July 10th, where they held rates unchanged at 1.75%.  Expectations are for the BOC to leave rates unchanged once again at 1.75%.  The last time the BOC moved on interest rates was October 2018, in which they HIKED 25bps.   Although the BOC projects GDP growth to be 1.3% in 2019 and about 2.0% in 2020, they have remained cautious amid trade tensions and a global slowdown.  The next full update of the Bank’s economy and outlook will not be until the October 30th meeting, so the bank may be likely to carry on with its “appropriate” language and continue to “monitor the data” until then.

We have been monitoring price action in the USD/CAD and waiting patiently for it to meaningfully break above the resistance zone from the horizontal resistance at 1.3345 and the 61.8% retracement from the high on May 31st to the low on July 19th, which is 1.3357   Today we finally moved higher, pushing to a high of 1.3382. 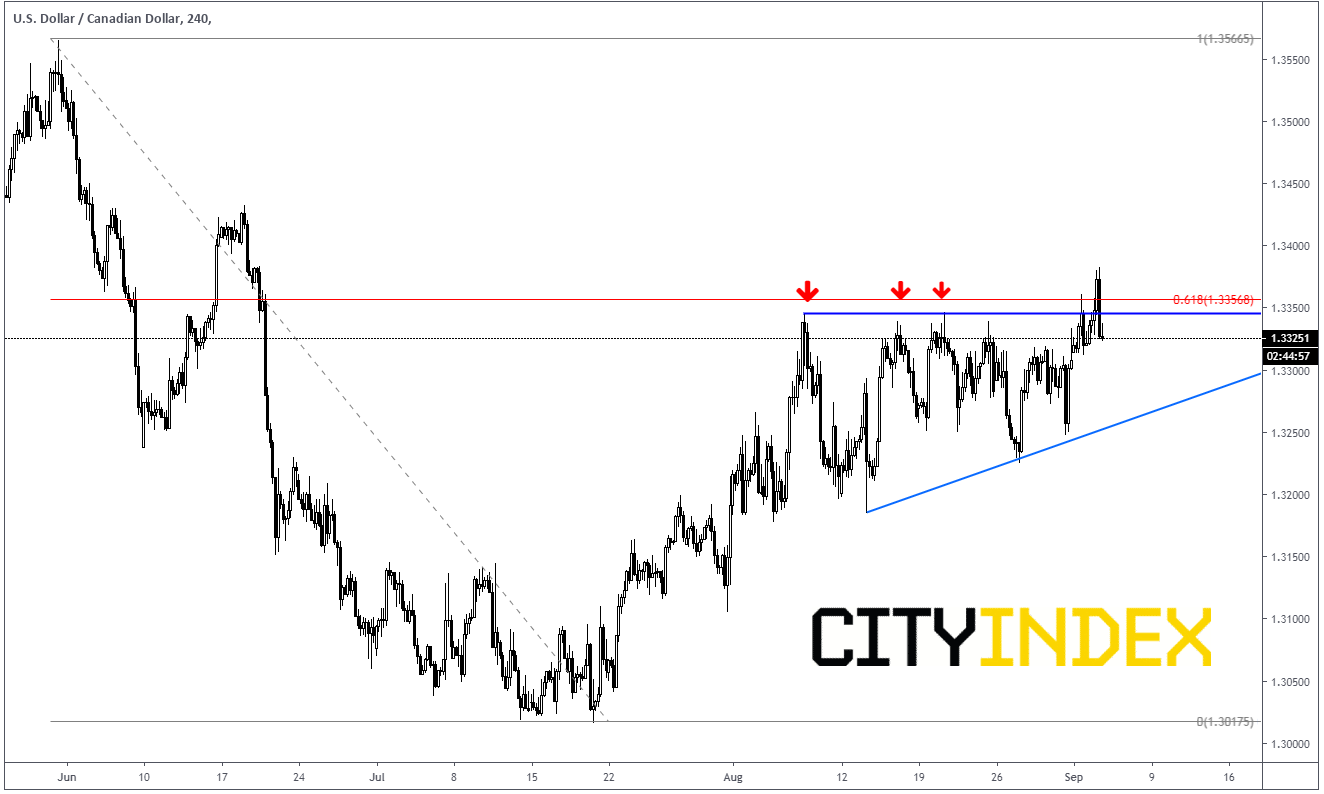 However the US ISM Manufacturing PMI released this morning came out worse than expected, creating a false breakout and the pair moved back below that important zone.  Yesterday and today, USD/CAD was bought in the morning and sold in the afternoon, creating two shooting stars on a daily candlestick chart.

If the BOC is more hawkish tomorrow, watch for USD/CAD to remain under the 1.3345/1.3357 resistance zone, and trade back into the range.  If they are more dovish, there is room for the pair to trade up towards 1.3500.