As they pulled up their morning news feeds and charts, many US traders received a big jolt upon seeing the latest moves by the People’s Bank of China (PBOC). The central bank for the world’s second largest economy set the value of the renminbi fully 1.9% lower, shattering the idyllic stasis that had kept USD/CNH pinned in a tight 6.19- 6.22 range for nearly five full months. Tonight’s one-off move was the biggest devaluation by Chinese authorities since the advent of China’s modern exchange rate regime in 1994.

In our view, the decision stemmed from two proximate catalysts:

1)      Abysmal Economic Data Over the Weekend

The first catalyst was this weekend’s surprisingly weak trade balance data; Chinese exports and imports both fell at a more than 8% annualized rate, increasing the pressure on the Chinese government to stimulate its economy. The trade data was also accompanied by a steep 5.4% y/y drop in PPI data, suggesting that the slowdown in China’s economy is reaching critical levels.

Last week, the International Monetary Fund (IMF) suggested that “significant” work was still required before it could include the yuan in its basket of currencies supporting Special Drawing Rights (SDRs). Much like you might deep clean and wax a car before selling it, China was keeping the value of its currency unusually steady to try to make it appear more stable and reliable in a bid to impress the IMF and earn a spot in the prestigious currency basket. After last week’s comments, the PBOC decided that the immediate need to stimulate its moribund economy was more important than the long-term goal of joining the SDR basket.

Not surprisingly, USDCNH has surged in the wake of the announcement, reaching its highest level since late 2011, but the more relevant impact for most traders is on commodity currencies such as the Australian dollar. At the margin, the weaker value of the Chinese currency will make Australian exports (namely, industrial metals like copper and iron ore) more expensive to Chinese importers. While the economic impact of this move will be relatively limited, it just serves as another blow to the beleaguered Australian dollar, and the decision also increases the likelihood of interest rate cuts from the Reserve Bank of Australia later this year.

From a technical perspective, AUDUSD reversed from previous resistance in the mid-.7400s. As of writing, the pair is showing a daily Bearish Engulfing Candle*, signaling a shift from buying to selling pressure and hinting at a potential bearish continuation over the rest of the week. To the downside, the next level of support to watch comes in around last week’s lows near .7250, but if that level gives way, a continuation down to the 161.8% Fibonacci extension at .7180 could be in play. 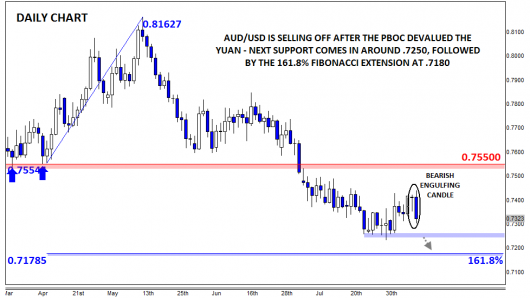