WTI lower, but it has little to do with the upcoming OPEC+ meeting

Over the past weekend, China released its official NBS Manufacturing PMI for July.  The print was 49.0 vs 50.4 expected and 50.2 in June.  This is the fourth out of the last five months that the reading has been below the 50 contraction/expansion level.  The main reason for the weaker pint, the closing and reopening of cities around the country due to Covid-19.  In addition, Libya’s oil has risen to 1.2 million barrels a day according to Libya’s oil minister.  The last time Libya was producing this much oil was back in April.  Also, finalized today were the S&P Global Manufacturing PMIs for July out of Europe, all of which were below 50.  To top it off, the New Orders component of the US ISM Manufacturing PMI decreased from 49.2 in June to 48.0 in July, further decreasing overall demand.

How to start trading oil

OPEC+ meets this week on Wednesday.  However, last week several sources from the Organization of the Petroleum Exporting Countries said that member nations may agree to keep output steady or increase it slightly in September.  Recall that it was just a few weeks ago that US President Joe Biden went to Saudi Arabia to ask for additional oil supply.

On Monday, WTI Crude Oil traded to its lowest level since July 14th when it hit an intraday low of 90.95.  Previously, WTI has been consolidating in a symmetrical triangle after hitting its highest level since July 2008, on March 7th, at 131.48.  Crude oil broke below the bottom trendline of the channel on July 5th, near 103.19.  Since then, WTI has been trading in a smaller symmetrical triangle between 90.95 and 105.60.  On Friday, Crude oil broke above the top trendline of the smaller triangle and formed a shooting star candlestick formation, an indication of a possible reversal. On Monday, Crude broke below the bottom trendline of the triangle, reaching an intraday low of 94.11. 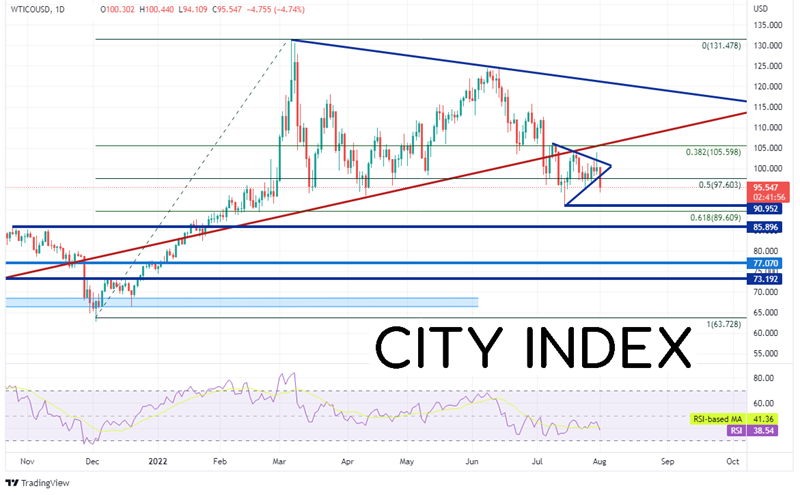 If the price of WTI Crude Oil continues to move lower, first support isn’t until the lows of July 14th, way down at 90.95. Below there, Crude can trade to the 61.8% Fibonacci retracement level from the lows of December 21st, 2021 to the highs of March 7th, near 89.51, then horizontal support at 85.90.  However, if price reverses and begins moving higher, the first resistance is at the bottom trendline of the short-term triangle near 98.50.  Above there, Crude oil can move to the top, downward sloping trendline of the short-term triangle near 101.50 and then Fridays highs at 103.99. 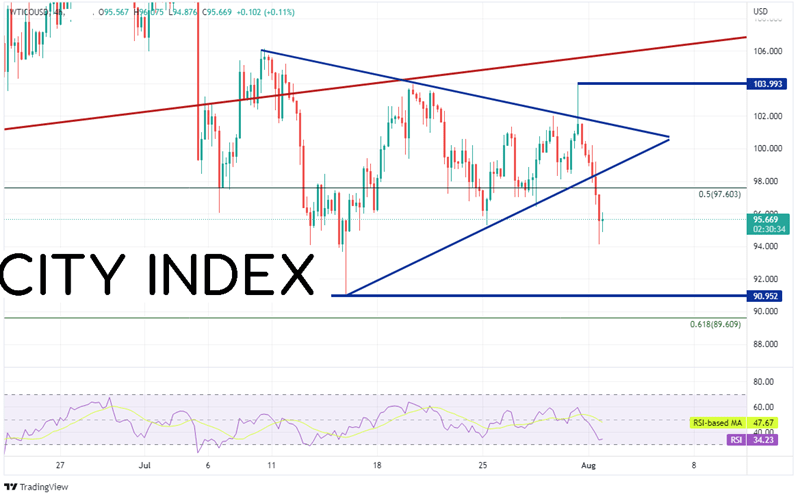 With negative manufacturing data beginning in China and continuing throughout the US session, WTI Crude Oil has been trading lower, down nearly 5% on Monday.  Throw in an OPEC+ meeting with “no change, or slight increase in output” expected, and the supply side offers little help to support the price.  If WTI can’t break back above the bottom trendline of the short-term symmetrical triangle, near 98.50, price could head all the way down to the July 14th lows of 90.95!