Next earnings preview: Where next for the Next share price?

When will Next release annual earnings?

Next is scheduled to publish preliminary full year results covering the 12 months to the end of January 2022 on the morning of Thursday March 24.

Next said in early January that it had experienced a stronger finish to the year than expected, prompting it to once again upgrade its expectations. Full price sales in the eight weeks to Christmas were 20% above pre-pandemic levels and it booked £70 million extra in sales than forecast, providing strong momentum as it entered 2022.

Full price sales were up 15% in the year to December 25, with digital sales up 49% as adoption of online shopping continues to gain pace even after lockdown rules have eased. Next had anticipated that the fourth quarter would be weaker than the third but said this didn’t materialise thanks to a ‘strong revival’ in formal and ocassionwear as people head back to offices and start attending formal events again. That countered a 24% fall in store sales, although these are continuing to return to pre-pandemic levels. Regardless, overall growth was impressive considering Next said inventory levels were below desired levels over the holiday season and that its delivery services suffered from a shortage of warehouse and delivery workers, with price rises helping drive growth.

Full price sales will grow at a slower rate of around 12.8% over the year as a whole as January is historically a weaker period for consumer spending and driven more by discount sales, although Next hasn’t needed to clear as much clothing thanks to lower inventory levels and the better-than-expected performance of full price sales.

Next has said it is aiming to deliver annual pretax profit of around £822 million, which would be up from just £342 million when the pandemic hit its results last year and 9.8% higher than 2019-levels, highlighting the rapid growth Next has delivered through an extremely tough period for retailers. Basic EPS will be up around 12.2% to 530.0p.

The company paid out two special dividends during the year worth 270p, both of which have already been paid. Importantly, Next made those payouts to shareholders to make up for the lost dividends during the height of the pandemic and intends to return to a normal dividend cycle in the current year, starting with a final dividend for the recently-ended financial year. Next plans to continue returning any surplus cash through special payouts and buybacks going forward so this will be closely-watched. Next delivered over £345 million of free cash in the recently-ended year and said this should rise to £430 million in the current financial year.

Next has already provided initial guidance for the current financial year to the end of January 2023 and said it is aiming to grow full price sales by 7% to £4.6 billion and pretax profit by 4.6% to £860 million. Next is known for providing conservative guidance and raising its targets when appropriate, so the outlook will be under the spotlight as investors gauge how confidence has changed since issuing those targets almost three months ago. Notably, analysts believe full price sales can grow over 12% this year and that pretax profit can grow 6.3%, implying they expect Next to upgrade its outlook like it has done in the past.

With that in mind, there is huge uncertainty lingering over Next and the wider retail market going forward. The cost of living crisis and how this impacts consumer spending on clothing will be the main headwind causing concerns for investors. Households will be spending considerably more on bills, food, fuel and energy this year and some analysts think any surplus funds could be directed more at leisure rather than shopping as people enjoy their post-lockdown freedoms. Plus, Next was forced to hike prices by around 6% in the second half of the year as it grapples with higher costs and this could continue going forward, which in turn could make its goods pricier and depress demand further for cost-conscious shoppers. The economic outlook could be key in deciding how Next fares this year and whether the conservative outlook will be raised.

Next shares sank to a 16-month low earlier this month before a reversal kicked-in. The stock has since rebounded over 10% and today trades at 6,380p.

The sharp uptrend caused by the reversal has propelled the stock higher, but it has already showed signs of stalling. The RSI remains in bearish territory and the stock hit a ceiling of 6,530p last week. The fact the shorter-term moving average remains below the 100 and 200-day averages is another signal that the stock could remain under pressure. The fact 5-day average volumes have increased compared to the 10, 20 and 30-day averages supports the view that the recent ceiling could hold. If it fails to break above here and begins to fall again then the first downside target to watch is the level of resistance-turned support of 6,320p. Below there, we are looking at a possible return below 6,100p.

Shares need to break above the 6,530p ceiling to keep the uptrend intact. After there it has a lot of room to recover as the next level it needs to recapture the 50-day sma at 6,940p. There remains considerable upside potential beyond there considering the 200-day sma sits at 7,712p. The 22 brokers that cover the stock believe it can climb over 28% over the next 12 months to recover back to 8,202p, a level not seen since early 2022. 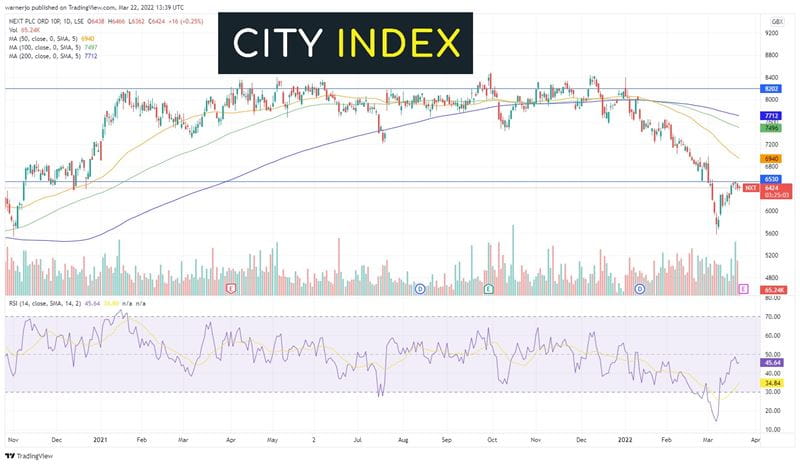 How to trade NXT shares

You can trade Next shares with City Index in just four easy steps: