Lloyds FY preview: Where next for the Lloyds share price?

When will Lloyds report FY earnings?

Lloyds will release annual results for 2021 alongside a strategic update on the morning of Thursday February 24.

Lloyds Banking Group is set to round-off what has so far been a bumper earnings season for London’s banking industry. The industry has seen earnings explode thanks to the large sums that were set aside for potentially bad loans during the pandemic continue to be released and demand bounces back as the economic outlook improves. A buoyant property market helped prop up UK-focused banks like Lloyds, while others have reaped rewards from large investment banking arms.

NatWest kicked things off last week when it revealed it generated bumper profits of £4 billion in 2021 after suffering a £351 million loss the year before, allowing it to grow dividends, launch a new buyback and set a buoyant tone for its peers.

HSBC reported this morning and said pretax profit soared to $18.9 billion from just $8.8 billion and launched a new $1 billion buyback, stating it expected profitability to improve at a faster rate than previously expected as higher interest rates this year should boost.

Barclays will follow on Wednesday morning and, having reported all-time record pretax profits in the first nine months of 2021, expectations are high. Analysts forecast Barclays will also see profit soar to £8.1 billion in 2021 from £3.1 billion the year before and that buybacks will also be key in deciding how markets receive the results, which will also be the first set of results since CS Venkatakrishnan took over as the CEO of Barclays at the start of November, replacing Jes Staley. You can read our full preview ahead of the Barclays earnings here.

The bank’s net interest margin, the key measure of profitability within the banking industry, is forecast to remain flat year-on-year at 2.52% in 2021 and analysts currently believe Lloyds will be able to keep a lid on costs and improve profitability in 2022 with forecasts the bank can achieve a margin of 2.60%. Lloyds has previously demonstrated its ability to control costs and this could prove a vital skill for the bank as it tries to fully capitalise on the anticipated hike in interest rates this year. The bank could send a strong signal if it achieves a better margin in the fourth quarter than the 2.55% forecast.

Lloyds had a CET 1 ratio, which measures the financial strength of a bank, of 17.2% at the end of September, well above the 12.5% target, which should provide room for Lloyds to pay dividends and introduce new buybacks. A Bloomberg consensus shows analysts are expecting an ordinary payout of around 2.2 pence per share for 2021.

Notably, this will be the first set of results since Charlie Nunn took over as CEO late last year. He was previously the head of HSBC’s wealth and personal banking divisions and replaced Antonio Horta-Osorio. Investors will be eager to see how he views the market as we head into a higher-rate environment this year and how he plans to balance the need to continue investing in the bank’s digital transformation and new growth catalysts while also keeping cash flowing back to shareholders.

Lloyds shares have fallen over 7% since hitting a post-pandemic high of 56p last month and have fallen below the 50p mark for the first time in a month today.

The share price is currently hovering above the 2022-low of 49.22p hit on January 24 and this floor needs to hold to prevent the door being opened to the 200-day sma at 48.38p, which would close the gap created when the stock surged higher at the start of the year.

The 54.0p February closing-high is the first upside target it needs to recapture in order to signal a move higher toward the 2022-high of 56p. 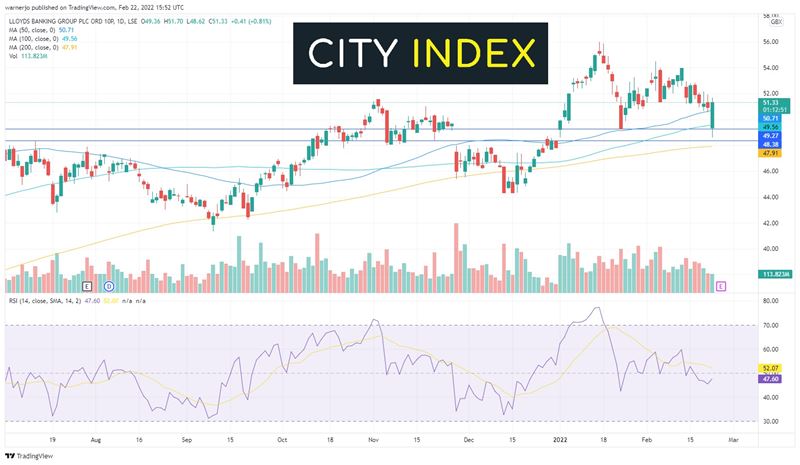 You can trade Lloyds shares with City Index in just four easy steps: