Rivian 2021 preview: Where next for Rivian stock?

When will Rivian report Q4 2021 earnings?

Rivian will release results covering the fourth quarter and full year for 2021 after the markets close on Thursday March 10.

Rivian went public last November at a valuation of $66.5 billion and, following a wild ride that pushed its worth as high as $128 billion, the stock is now trading at an all-time low and boasts a value of just $38 billion.

The recent pressure on Rivian shares has been caused by the current supply chain problems hitting the entire auto industry. There are shortages of semiconductor chips and components, the labour market remains tight and there are no signs that the inflationary environment will ease anytime soon. Not only has this caused Rivian to disappoint with its initial production figures, but it has also prompted the company to hike the price of its vehicles by around 20% earlier this month.

CEO RJ Scaringe warned late last year that the global chip shortage was the ‘most painful’ hurdle to overcome in order to grow output. The company, like others in the market, have replaced some chips for more basic and available versions in order to counter the pinch in supplies but the company has said it expects the chip shortage to remain a problem throughout 2022.

The tough environment reached boiling point for Rivian last week, when it announced it was hiking the price of its R1T truck to around $79,500 from $67,500 and its R1S SUV to $84,500 from $70,000 to counter rising costs across the business. Rivian defended its move and highlighted that the average price of a new vehicle in the US has risen some 30% since it set its initial price and started taking preorders for the R1T back in 2018. Still, having caused outrage among those that had already placed their orders at significantly lower prices, Rivian swiftly made a U-turn and said the new higher prices would only apply to orders made after the start of March.

The biggest question raised by the price hike is whether it will impact demand. Rivian has been growing pre-orders at an impressive rate, having grown to 71,000 by the middle of December from just 48,000 a couple of months earlier. Pre-orders should have continued to rise rapidly in the final weeks of December and in early 2022, although investors should pay close attention over the coming quarters in order to gauge whether the price hikes have weighed on demand.

The decision to hike prices also encouraged Tesla boss Elon Musk to take a jab at the company on Twitter, responding to the decision by warning that Rivian’s ‘negative gross margin will be staggering’ and warned it is ‘near impossible’ for other firms to launch an affordable electric pickup truck, with Tesla having delayed its own Cybertruck until 2023.

Those pre-orders exclude Rivian’s commercial segment that is underpinned by its Electric Delivery Vehicle (EDV) designed for businesses looking to turn their fleets green. Amazon, which is a major shareholder in Rivian with a stake close to 20%, has already ordered 100,000 EDVs. Although this is a multi-year deal that won’t be completely fulfilled until the end of 2025, Rivian should confirm that the first EDVs have been delivered to Amazon when it reports results this week.

Rivian has the capacity to meet current demand considering its factory in Illinois can produce up to 150,000 vehicles a year and that is already being expanded to 200,000. There is more in the pipeline too after Rivian revealed it has plans to undertake a $5 billion development of a second factory in the state of Georgia that will, at its peak, be able to produce 400,000 vehicles each year. The first vehicles are expected to roll off the new production lines in 2024.

With deliveries still ramping-up, the financials will not be the primary focus for investors this week. Analysts believe the initial deliveries made in the final three months of 2021 earned the company around $64 million. The Ebitda loss for the quarter is forecast to come in at $904.3 million and the net loss at the bottom-line is seen coming in at $1.83 billion.

For the full year in 2021, revenue will be broadly level with what was delivered in the final quarter while the Ebitda loss is expected to amount to $2.76 billion and the net loss $4.07 billion.

Liquidity remains strong considering Rivian had around $19.9 billion worth of cash at the end of September once its $13.5 billion in IPO proceeds and $1.2 billion of loan notes were included, although they had not been formally secured by that date.

It remains early days for Rivian, which is focused on the long-term. Its current ambition is to capture 10% of the global electric vehicle market by 2030. Only two companies – Tesla and VW Group - currently hold over 10% of the EV market today, according to data from Statista.

It is important to remember that EV sales currently only account for a fraction of overall vehicle sales around the world and that the market will be significantly larger by the end of the decade. Estimates from Deloitte suggest just 2.5 million electric vehicles were sold worldwide in 2020 but that this will grow to 11.2 million in 2025 and hit over 31 million in 2030. But competition is intensifying, with hundreds of new EV models set to be launched in 2022 alone. This includes Ford, which is expected to unleash its own F-150 electric pickup truck this year that will directly compete with the R1T. Ford owns 12% of Rivian but the pair are not working together.

Tesla’s stock became highly sensitive to quarterly deliveries and results when it was in growth mode and racing to become sustainable and profitable, and markets can expect a similar trend for Rivian as it joins the race in the electric vehicle market. The key influence on Rivian stock over the next year and beyond will be the rate of growth it can deliver.

Where next for RIVN stock?

Rivian shares proved highly volatile during its first month as a listed company before settling into a downtrend that has pushed the stock gradually lower over the past three months.

The fact the downtrend has accelerated since the start of March and the stock has hit several new all-time lows this week suggests shares could fall further before finding the floor, which is further reinforced by the fact volumes have increased to suggest the current downturn is gaining momentum.

However, there is room for shares to rebound while keeping the longer downtrend in play. A move above the January-low of $53 may help provide confidence that the current trend is reversing and that it can find higher ground. 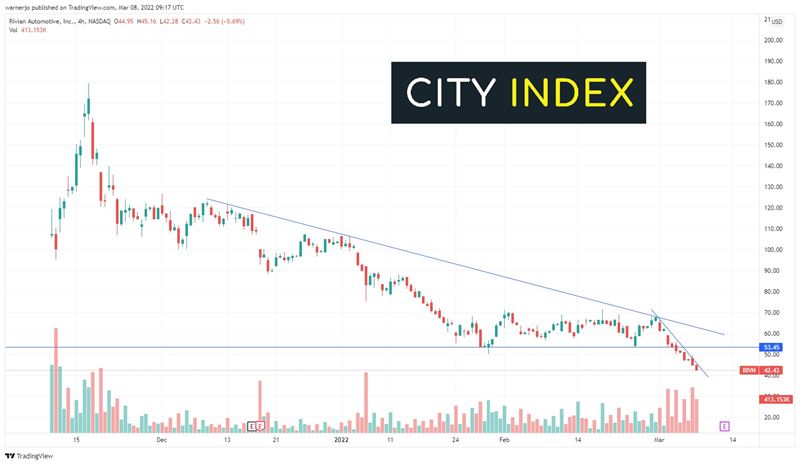 How to trade Rivian stock

You can trade Rivian shares with City Index in just four easy steps: