Pinduoduo Q4 preview: Where next for PDD stock?

When will Pinduoduo report Q4 2021 earnings?

Pinduoduo is scheduled to release fourth quarter and full year earnings for 2021 before US markets open on Monday March 21.

Pinduoduo operates a mobile platform that connects farmers and agricultural producers with consumers across China with the goal of increasing connectivity and creating new opportunities and markets for both businesses and citizens.

Pinduoduo has been placing a greater focus on its R&D investments after focusing heavily on marketing and sales over the past five years in an effort to deliver ‘more sustainable growth’. Its primary goal is to leverage management’s expertise in engineering to help improve the efficiency and productivity within China’s food and agriculture systems.

This is all part of its RMB10 billion Agriculture Initiative that was launched last year, when it also said it is funnelling all profits into its new strategy aimed at addressing the ‘critical needs in the agricultural sector and rural areas’.

Pinduoduo has admitted the initiative is ‘not driven by profit or commercial goals’ and confessed that this will cause a short-term impact on earnings. Profits are being directed to projects such as helping farmers build brands, training young people in the agricultural industry and building-out infrastructure to cut costs and improve delivery networks.

The hope is that the initiative will allow it to improve the amount and quality of the agricultural goods that flow through its app while efforts to lower costs should feed through to lower prices for consumers, which should attract more to the platform and help it grow both the business and the wider industry over the long-term.

Analysts forecast revenue is forecast to rise to RMB29,966 million in the fourth quarter from RMB26,547 million the year before. The 13% growth pencilled-in by analysts is the slowest on record since Pinduoduo went public back in 2018. Growth has started to stall and slowed sequentially since it delivered 238% year-on-year growth in the first quarter of 2021.

Growth in average monthly active users is also expected to slow and climb to 754.4 million at the end of December from the 741.5 million it had at the end of September. That would be up just 4.8% from last year. Active buyers are also set to experience a slowdown and rise to 883.3 million from 867.3 million three months earlier.

Pinduoduo is expected to report its third consecutive quarter of operating profit with a fourth quarter figure of RMB1,652.4 million. That will be lower than the two previous quarters but will have turned from the RMB2,047.8 million loss reported in the fourth quarter of 2020.

Pinduoduo is not known for providing forward guidance, but analysts believe the company can grow revenue by 32% in 2022 and that MAU growth will start to accelerate again. More importantly, analysts believe the company will start to reap the rewards of its investment considering they have operating profit of RMB8,811 million pencilled-in for 2022 – almost five times higher than the forecast for 2021.

Pinduoduo has been one of many Chinese stocks listed in the US to rally higher this week after the Chinese government intervened in the recent rout by pledging to support financial markets and overseas listings, removing some key uncertainties for the digital industry. Some analysts had suggested the regulatory overhaul on tech could last for years to come but the government has now promised to draw a line under the review soon. China and the US are also thought to be coming close to an agreement on a suitable audit process and new rules that satisfy both sides, reducing the threat that Chinese stocks will have to abandon their US listings.

Read more: Why Chinese stocks have started to rally higher

Where next for PDD stock?

Pinduoduo shares have suffered heavy losses over the past year, with shares having lost over 70% in value even after popping higher yesterday on the news of the government’s intervention.

Shares are likely to remain volatile as markets digest the details of the government’s plan but the 30-month low of $23.21 hit earlier this week should be a distant memory considering the stock is now comfortably above the $40 mark. Still, that should be treated as the ultimate floor for the stock going forward should shares come under further pressure.

The spike seen yesterday pushed the RSI out of oversold territory and saw trading volumes hit an all-time high, suggesting this could be a strong start of a reversal. A move above the March-high of $55 to recapture the 50-day sma would install confidence the stock can move higher, but it could swiftly move above there toward the 100-day sma at $63.

Considering much of the pressure on shares has come from the regulatory pressure and economic uncertainty in China, the news could allow Pinduoduo shares to quickly recover the heavy losses seen over the past year if the government’s actions prove effective, suggesting it isn’t too early to bring the 200-day sma target at $83 into view. Notably, the 42 brokers that cover the stock see greater upside potential and believe the stock could hit $101 within the next 12 months. 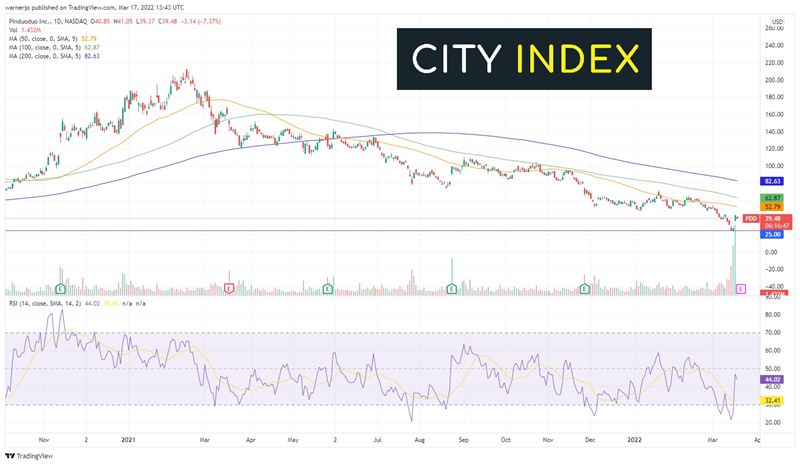 How to trade Pinduoduo stock

You can trade Pinduoduo shares with City Index in just four easy steps: