Oracle Q4 preview: Where next for Oracle stock?

When will Oracle report Q4 earnings?

Oracle is scheduled to publish fourth quarter and full year results covering the 3-month and 12-month periods to the end of May 2022 after US markets close on Monday June 13. The software company will hold a conference call at 1600 Central Time on the same day to discuss its performance.

Wall Street is expecting Oracle to report total revenue of $11.68 billion in the fourth quarter of its financial year, up some 4.1% from the year before. That compares to 3% to 5% growth target set by the company. Analysts forecast quarterly adjusted EPS will fall 10.6% from last year to $1.38, at the upper end of the $1.35 to $1.39 guidance range provided by Oracle.

Oracle, best known for its software and services such as Java, is on course to report its slowest growth in annual adjusted earnings in six years when it releases full year results, with the fourth quarter expected to mark the second consecutive period that EPS has declined.

Revenue growth has slowed in recent quarters due to a pullback in demand in some markets due to the uncertain economic outlook, with some analysts anticipating license sales for its infrastructure arm could struggle this quarter. Meanwhile, its hardware division that deploys equipment used by businesses setting up data centres may have continued to suffer from supply chain problems after CEO Safra Catz admitted the company ‘couldn’t meet every need as quickly as we would have liked’ in the last quarter. Still, demand for Oracle’s cloud products and the steady recurring income derived from its servicing arm means the company has been able to keep growing its topline. The tougher environment also meant short-term deferred revenues – representing the amount of sums locked-in for services yet delivered – came in below expectations in the last quarter.

Oracle has been shifting its focus toward the cloud for several years and investors have taken some comfort in the fact that growth in this area continues to remain strong, even if other parts of the business are having a tougher time.

Meanwhile, earnings have started to come under pressure amid rising costs. Its adjusted operating margin started to tighten in the last quarter and this is expected to have continued in the final quarter, with analysts pencilling-in a margin of 46.3% compared to 48.5% the year before. Operating costs jumped 8% in the last quarter, outpacing the 5% growth in revenue, as expenses rise across the business, particularly on R&D and its cloud services division. Higher interest costs on its debt also weighed on the bottom-line. Oracle also blamed the fact its investments in gene-sequencing firm Oxford Nanopore and chipmaker Ampere Computing, both of which suffered heavy falls in the period, for missing expectations in the last quarter – but said it believes both will ultimately deliver ‘strong returns’ for the company even if they could remain a drag in the shorter-term.

Markets believe growth can continue to accelerate in the new financial year, with current consensus figures from Bloomberg suggesting Oracle can deliver 5.9% topline growth and a 10.4% jump in adjusted EPS during the 12 months to the end of May 2023.

It is worth noting that Oracle’s acquisition of Cerner for $28 billion was recently completed, providing a fresh catalyst for the new financial year. Cerner deals in health records and the pair plan to work together to ‘transform healthcare delivery by providing medical professionals with better information’. Oracle said it expected Cerner to immediately boost adjusted EPS in the first full year after closing and ‘contribute substantially more to earnings in the second fiscal year and thereafter’. Oracle has described healthcare as the ‘largest and most important vertical market in the world’ and Cerner will accelerate the company’s overall revenue growth over the coming years.

Where next for ORCL stock?

Oracle shares have collapsed over 30% since peaking at all-time highs over six months ago.

The 14-month low should be treated as the initial floor for the stock, which must hold to avoid opening the door to $66 level of support seen throughout March 2021. Below there, the stock could find itself falling below $64 for the first time in 16 months.

The RSI is in neutral territory and isn’t providing any signals at present, but there has been a notable drop in trading volumes over the last five to ten trading sessions whilst the stock has largely found higher ground to suggest the recent rebound could struggle to gain traction and that it could come under further pressure. 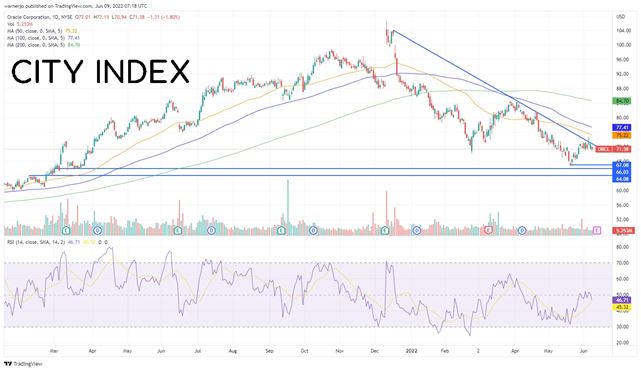 How to trade Oracle stock

You can trade Oracle shares with City Index in just four easy steps: