Bed Bath & Beyond Q1 preview: Where next for BBBY stock?

When will Bed Bath & Beyond release Q1 earnings?

Bed Bath & Beyond is scheduled to release first quarter earnings covering the three months to May 28 before US markets open on Wednesday June 29.

Sales are forecast to drop over 22% from last year in the first quarter to $1.5 billion. The company, a favourite with retail traders, is expected to turn to an adjusted Ebitda loss of $79 million compared to the $86 million profit reported the year before, and swing to an adjusted loss per share of $1.27.

It is expected to be another tough period for Bed Bath & Beyond when it releases first quarter earnings this week, as supply chain problems and inventory troubles threaten to thwart the homeware retailer’s multi-year turnaround programme.

President and CEO Mark Tritton conceded that the board was ‘disappointed’ by the company’s performance during the last financial year that ran until the end of February, as supply chain disruption, the Omicron variant and lower consumer confidence had revealed a number of vulnerabilities at a time when it is trying to rebuild the business.

Investors will be hoping inventory levels and transit times have improved as this was a key headwind that held back sales by some $175 million and caused margins to contract in the previous quarter. It warned that it has been struggling to get its hands on the inventory it needs and said this would remain a problem ‘into the early part of fiscal 2022’. It is taking much longer to ship goods to where they need to be, and Bed Bath & Beyond said the amount of inventory stuck at congested ports was ‘abnormally high’.

Bed Bath & Beyond has already warned that the first half of the financial year will be tougher than the second as a result, assuming the supply chain problems ease later in 2022. This should also allow it to modestly improve its adjusted gross margin over the full year as a result and see adjusted Ebitda start to improve on year-on-year basis in the second half.

Sales were already in decline before these challenges emerged as it has divested several non-core brands as part of its transformation. The buybuy Baby brand is still delivering low-single digit growth in sales and providing some encouragement at a time when sales of its core products such as bedding, home décor, bath and kitchen products are in decline.

Still, Bed Bath & Beyond has continued to generate cash and has returned some of that to investors through share buybacks. The company had some $500 million in cash and investments at the end of February and total liquidity of around $1.4 billion, and that should improve as cashflow recovers when the kinks in the supply chain are ironed out. Wall Street currently believes operating cashflow will steadily increase throughout this year and rise by over one-third annually.

Where next for BBBY stock?

Bed Bath & Beyond shares have collapsed over 75% over the last three months but appear to have found a floor after hitting a 13-month low of $5.95 earlier in June, which pushed the RSI into oversold territory to suggest this is the initial level of resistance that needs to hold. A slip below here opens the door to levels last seen when the stock bottomed-out from the pandemic-induced falls seen back in April 2020, first to $5.90 and then to $5.25. The ultimate floor should be considered as $4.40.

The stock has climbed over 13% since hitting that 13-month low, providing some confidence it can head higher. The first upside target for the stock is the May-low of $7.50 which, once recaptured, opens the door to $9.66 and then the 50-day moving average at $10.65.  Notably, the 19 brokers that cover the stock see mild upside from current levels with an average target price of $7.23. 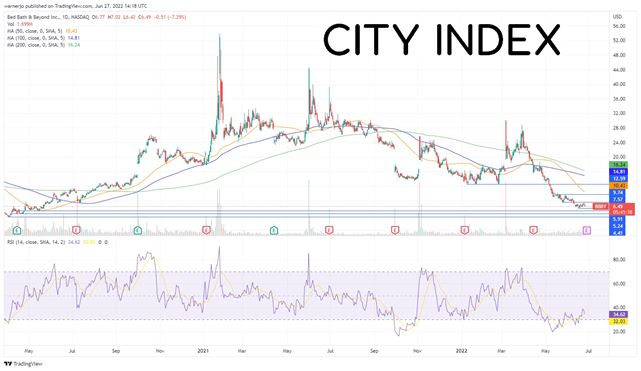 How to trade Bed Bath and Beyond stock

You can trade Bed Bath & Beyond shares with City Index in just four easy steps: