What is a stock market bubble and how do you identify one?

What is a stock market bubble?

A stock market bubble, also known as an asset or speculative bubble, is a market movement consisting of a rapid, exponential increase in share prices over a period of time. The rise in price takes the value of the stock above and beyond its intrinsic or true value.

Eventually the price will hit a level at which buyers are unwilling to continue upholding the rise. This leads to the bubble bursting, known as a market crash.

These bubbles can include the entire stock market – nationally or globally – exchange-traded funds (ETFs), or just shares in a certain market sector.

While the term bubble is most commonly associated with stocks, speculative bubbles occur across a range of asset classes including real estate, cryptocurrencies and commodities.

How to trade a stock market bubble

Stock market bubbles are characterised by rises and subsequent declines in shares and indices. You can trade both with City Index in a few easy steps:

What causes a stock market bubble?

Stock market bubbles are caused by pure speculation. People become willing to pay increasingly higher prices for an asset despite knowing its true value – based on earnings, revenue and other fundamentals – is lower.

However, not all periods of increased buying activity by traders result in stock market bubbles. Some rapid price rises are just part and parcel of the market cycle, found after a bear market when buyers flood in. The difference between a normal bull run and a speculative bubble is what has been described as ‘irrational exuberance’, a spout of buying pressure that cannot be justified.

The initial spark of a stock market bubble is a relative unknown; it can be something as simple as an analyst changing their recommendation for a stock, a news report or recently a mention on social media like Twitter or Reddit.

Stages of a stock market bubble

There are five recorded stages of a stock market bubble according to American economist Hyman Minsky:

What happens with a stock market bubble bursts?

After a stock market bubble bursts, as all of them do, the market price will decline quickly.

There can be any number of causes for the crash, such as one well-known investor selling their position, an analyst changing their rating or just a group of shareholders deciding its time to take their profit. Whatever the cause, the pinprick in the bubble will lead to a sudden rush as everyone else gets panicked by the selling pressure.

Stock market bubbles are known to cause economic bubbles, which occurs when an entire region or national economy experiences a dangerously rapid rise in prices – known as inflation – followed by a recession.

Sometimes market participants, exchanges and even governments will work to stop the sudden price decline, but there’s rarely anything that’s effective in halting the selling activity. Safeguards – such as trading curbs and circuit breakers – do exist which can help to prevent trading activity on certain markets. Historically there have also been short selling bans to prohibit the sale of a stock that individuals don’t own.

While there are no clear-cut ways to identify a bubble – most people only spot a bubble in hindsight, after it’s crashed – there are a few common factors that they have in common.

1. Prices go against news and analysis

The most obvious sign of a stock market bubble is one we’ve already covered – that prices diverge from fundamentals. Investors are no longer adjusting their expectations in line with company earnings but are fuelled by rumours and optimism.

This being said, there are examples of company share prices rising exponentially with no profits to back it up – such as Tesla – but the difference with a bubble is that the speculation is based on no long-term future.

2. Popularisation of a trend

Once news or rumours about a share or group of shares start to swirl, they capture the attention of not just existing traders and investors, but the public too. These ‘story-stocks’ will often make big promises about how they’re the next big thing, or a sure-fire way to make money.

For example, the dot-com bubble was based on the idea that the internet was going to change the world – while not necessarily false, at the time there were a lot of empty promises from a lot of companies who had no real grounds to claim they were life-changing.


3. The public vs experienced traders and investors

The increased news coverage of a trend will lead to every Tom, Dick and Harry wanting a slice of the action. But when a trend attracts more novice traders than it does experienced market participants, it can be a clear sign that the market is based on unreliable speculation.

On their own, share prices reaching new highs don’t make a stock market bubble. But by assessing historic levels of resistance you’ll be able to tell what prices the market is willing to sustain, especially when fundamentals aren’t increasing at the same rate.

Japan’s economy experienced a bubble in the 1980s after the Japanese yen rose by 50%, which led to the Bank of Japan introducing more stimulative monetary policy and fiscal stimulus.

The rise of the internet in the late 1990s saw a massive number of companies, known as dot-com firms, going public across the world.

The rapidly growing sector was attracting increasing amounts of investment, even into companies that had unpromising business models. Many of these companies had yet to turn a profit, and some hadn’t even finalised their product – but provided they had something to do with the internet, it seemed investors didn’t care.

People became willing to buy internet stocks at high prices, believing they would be able to sell them later for an even higher price. The bubble was so huge that the S&P 500 doubled in value.

But eventually the market peaked, and the typical panic among investors took hold. This led to a decline of about 10%. Some companies that days before had been worth millions became worthless, and by the end of 2001 a lot of public dot-com companies had gone bust. 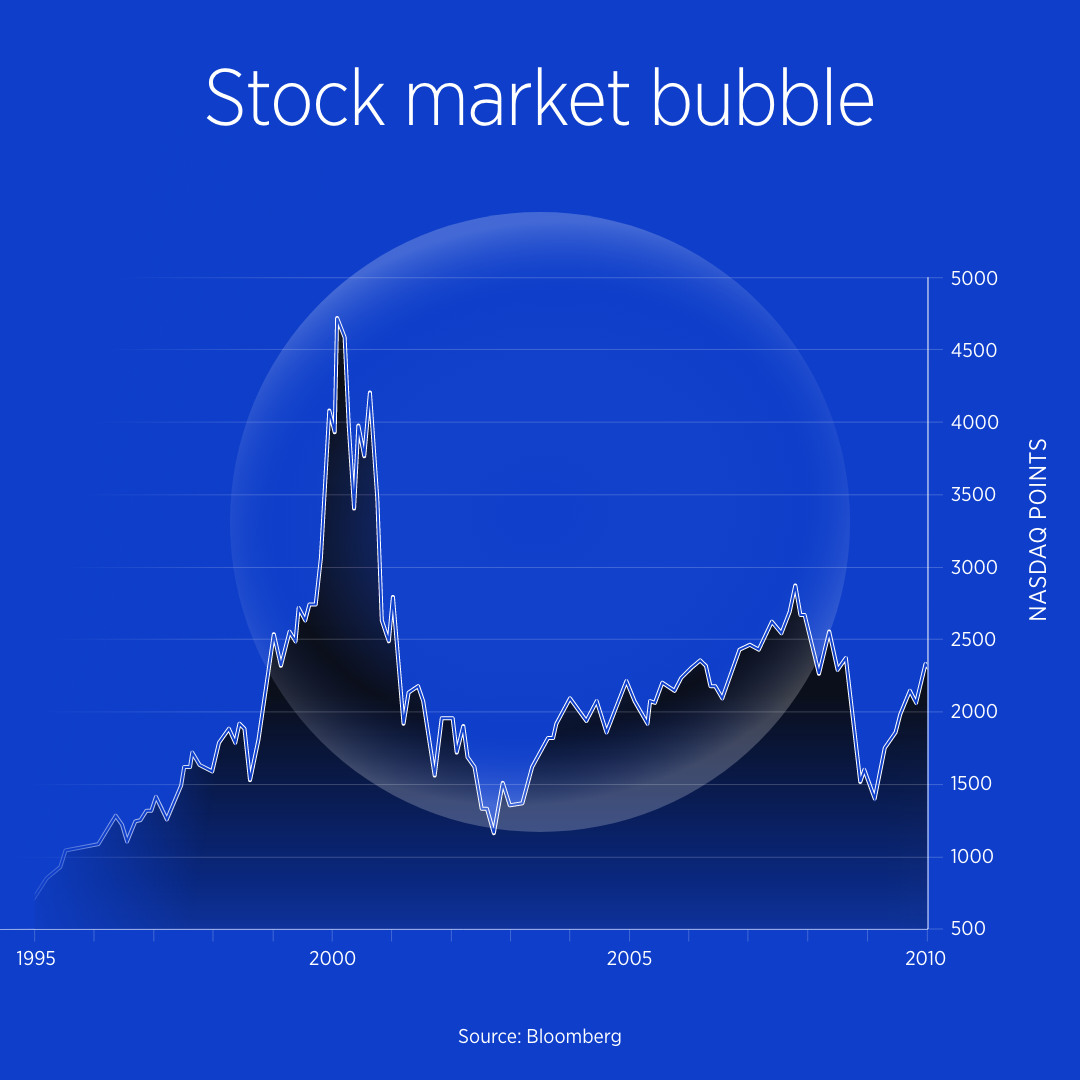 Is there a stock market bubble now?

During the global pandemic, stocks around the world fell dramatically. But as vaccines rolled out, markets began to bounce back and even reached new highs – particularly in the technology sector.

However, the rapid recovery caused some concern that it was a bubble and it could eventually burst. There are a few of the classic indicators that have been noticed throughout 2020 and 2021.

For starters, the euphoria of lockdowns easing, coupled with the rising valuations mean that more and more people are piling into the stock market – and not just professional or experienced traders. We’re seeing the rise of the novice trader, especially amongst the trend of using Reddit and other social media platforms to guide positions.

The rising speculation has also led to an increasing number of IPOs – and often SPACs – which many think is reminiscent of the dot com bubble.

At the same time, bitcoin and other cryptocurrencies are rising in value, ticking the box for another indicator of a bubble, that other riskier market increase.

Want to trade stock market bubbles? Open an account with City Index today to start trading stocks and indices as they rise and fall.