The price of gold will be monitored closely by market participants today after it was revealed that some G7 nations plan to ban new imports of the metal from Russia. This is of course due to Russia’s ongoing invasion of Ukraine and part of a growing list of sanctions imposed on it by western governments. The question is, does it matter? Of course, it does for gold producers in Russia – more on this later. But in terms of its impact on the global prices of gold, that’s going to be negligible. Russia might be the world’s second-biggest bullion miner, there are plenty of countries that could step in to meet any shortfall in physical gold supply. In fact, the industry has already taken steps to restrict Russian gold imports, making the G7 announcement just a formality.

Gold has been able to hold its own in a tight range around $1830 for several days now. This has coincided with the US dollar and bond yields easing back a tad of late, because, ironically, recession fears have fuelled bets on rate cuts from the Fed as early as a year from now. Judging by the sizeable rebound in equity prices as well, it is clear that some traders are losing sight of what’s in front of them right now: hawkish Fed and rate hikes.

The metal’s resilience here is thus driven by those factors than the news regarding the Russian gold export ban.

I reckon that traders will soon realise that they have been thinking too far ahead and will be hit with further hawkish surprises down the line. Thus, I recon equity and bond prices will come under renewed pressure and this, in turn, will prevent gold from rising more meaningfully. “Prevent” is indeed the correct word to use here, because had it not been for ongoing policy tightening from major central banks, gold would have – unquestionably, in mind – performed much better due, above all, to inflation-hedging and safe-haven demand.

Actually, when you zoom out a little bit, you will realise that gold has been pushed around without showing commitment in either direction for the last several weeks. It has been contained within the $1800-$1875ish range amid all the central bank rate hikes, inflation worries and recession talks, and bets over eventual rate cuts. As mentioned, there are clearly conflicting factors at play which has prevented the metal from making a decisive move in one or the other direction. Rising yields and a generally strong dollar are never positive influences for assets that pay no interest or dividends, yet the fact it hasn’t completely broken-down means there are other factors supporting it. These include safe haven flows amid the turmoil in crypto markets and the sell-off in equities over the past few months, as well as demand from inflation hedging.

Rising interest rates has been the number one factor behind gold’s struggles. The Bank of Japan aside, all other major central banks have either already started or promised to start a hiking cycle. This is making government debt more attractive as an asset class to hold for yield-seekers. It is also precisely why low-div-yielding stocks have been hit very hard in this bear market.

What does it mean for gold miners?

Well, to answer that, I had to get my colleague Joshua Warner, who is a stock market specialist involved. This is what he wrote about the sector with a focus on Polymetal and Petropavlovsk in reaction to the imports ban of Russian gold:

Although a ban on Russian gold imports is being regarded as largely symbolic, the news has provided a fresh blow to London-listed gold miners operating in the country such as Polymetal International and Petropavlovsk, which have already seen their valuations collapse since Russia invaded Ukraine in February.

The damage at Petropavlovsk has already been done considering the company has succumbed to its debt after Western sanctions prevented it from making repayments to its Russian lender, which also happens to be its main customer. That has prompted it to consider all options, including the sale of all its projects, but it has already warned that it is ‘highly unlikely’ that anything will be returned to investors due to the size of its debt pile. However, there is still interest in the stock, demonstrated by the volatility seen in the share price today.

Meanwhile, Polymetal has faced disruption but said just last week that sanctions have not had ‘a direct material impact on the business’. That hasn’t prevented the stock from losing over 75% in value since the start of the conflict and it is unlikely to recover so long as the war continues. However, its operations in Kazakhstan, which produce over 550,000 ounces of gold each year, provide some diversity and reports suggest it could be looking to spin these out into a separate company.

Taking everything mentioned into account, I reckon we will see continued range-bound trading at best. But there is that danger that even gold might suffer a sharp sell-off, if rate hikes and hawkish central bank commentary continue to dominate the agenda for the next several months.

Gold’s trend is as clear as mud 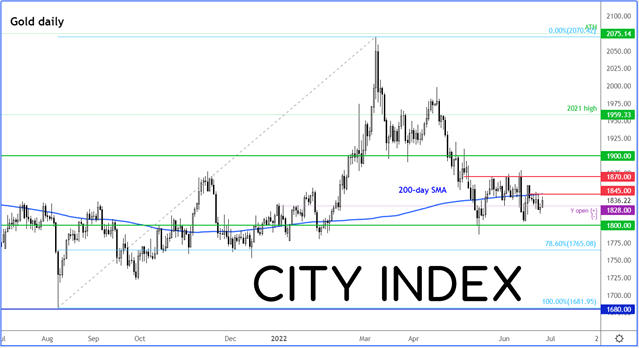 Gold has shown some willingness to hold below the 200-day average, which increases the risks of technical selling as speculators get discouraged by its performance and dump the metal in favour of something that’s moving. So far, we haven’t seen a strong desire to sell gold meaningfully, but that could change very quickly if the macro backdrop doesn’t improve for the metal.

Bullish speculators will now need to see gold reclaim the broken 200-day average first and foremost, at around $1845. If this condition is met, then it could pave the way for a bit of recovery towards the next level of resistance at $1870, amid fresh technical buying.

You can trade with City Index by following these four easy steps:
1. Open an account, or log in if you’re already a customer
2. Search for the company you want to trade in our award-winning platform
3. Choose your position and size, and your stop and limit levels
4. Place the trade
Related tags: Gold Commodities Trade Ideas