Wetherspoons share price: where next ahead of its interim results?

When will Wetherspoons release its interim results?

Wetherspoons is expected to release interim results later this week, either on March 18 or 19. This will cover the six months to the end of January, 2021.

What to expect from the Wetherspoons results

There is little doubt that the interim results will be dire. The UK eased the first national lockdown in June and moved to the tiered system where restrictions were enforced at a local level. This allowed pubs to reopen in areas where it was deemed appropriate, albeit with restrictions. The government then tightened restrictions in November before being eased over Christmas, only to then plunge the country into a third national lockdown in early January.

The most recent update from Wetherspoons revealed like-for-like sales fell 27.6% in the 15 weeks to November 8 after being ‘adversely affected by the introduction of changes to the tier categories, a 10pm curfew, a requirement to order all food and drink 'at the table', and the mandatory use of face masks when moving around inside pubs.’

All Wetherspoons have been closed since the start of 2021 and around 37,000 employees – representing 99% of its entire workforce – are currently on furlough.

How much cash is Wetherspoons burning through?

Although Wetherspoons is receiving government support and has cut costs across the business, Wetherspoons is burning through around £4.1 million each week whilst all of its pubs are closed, according to its last update in January, and investors will closely watch this figure when it releases its results.

Wetherspoons has the liquidity it needs to survive until the hospitality industry can reopen. It previously said it could afford to remain closed until the end of its current financial year and has since raised another £93.7 million through a placing in January priced at 1,120 pence.

How quickly can Wetherspoons recover?

The primary focus is therefore on the speed of recovery.

‘After a number of false starts, the hospitality industry generally anticipates a return to more normal trading patterns in the spring and summer, as a result of the introduction of a mass vaccination programme,’ chairman Tim Martin said in January.

When can pubs reopen?

1. April 12: Pubs will be allowed to serve customers outdoors. Six people from different households, or an unlimited number of people from two households, can meet in a pub garden.

2. May 17: Pubs can serve customers indoors with the same restrictions on the number of people that can meet, whilst groups of up to 30 can meet outside.

3. June 21: All restrictions on the pub industry will be lifted, allowing pubs and the wider hospitality industry to operate as normal.

Wetherspoons has already said it will open 394 pubs that have outdoor areas or roof-top gardens when restrictions are eased in April, representing just under half of its portfolio of 872 pubs across the UK and Ireland.

What is the outlook for Wetherspoons?

The roadmap out of lockdown provides some much-needed clarity to the hospitality industry, but the phased reopening will limit its ability to recover over the short-term. Whilst the outlook has improved for the likes of Wetherspoons, the speed of recovery remains highly uncertain.

Wetherspoons outlined a number of scenarios in January before the roadmap was announced by the government.

The first scenario assumed pubs would be able to reopen at the start of April, slightly sooner than the government’s plan, and that like-for-like sales would be down 50% upon reopening and then increasing by 5% per week to level out at minus 15% in mid-May and for the rest of the financial year.

The second scenario also assumed that pubs could reopen at the start of April but that there will be a slower recovery with like-for-like sales remaining 50% lower than normal for the rest of the financial year.

Both scenarios will result in lower revenue and profits and should be updated due to the fact pubs will open later than what Wetherspoons originally assumed. Wetherspoons said its performance would suffer further if pubs had to remain closed for longer but that it would only impact its outlook for the current financial year and not the subsequent years.

How to trade Wetherspoons shares

You can trade Wetherspoons shares with City Index using spread-bets or CFDs, with spreads from 0.1%.

Wetherspoons has been in the rise since early November. The share price trades over its 3-month ascending trendline, above its 20 & 50 sma on the daily chart. This indicates an established bullish trend.

The RSI is in bullish territory, pointing northwards and supportive of further gains.

Immediate resistance can be seen at 1450 an 11 month high reached in February. A break though of this level could see the share price look to attack 1600 it’s a level last seen pre-pandemic.

On the flip side, immediate support can be seen at 1300 the confluence of the trend line support and the 20 sma. A break below this level could see the 50 sma at 1230 offer support. It would take a break-through this level to negate the current bullish trend and to bring support at 1120 into focus low January 29. 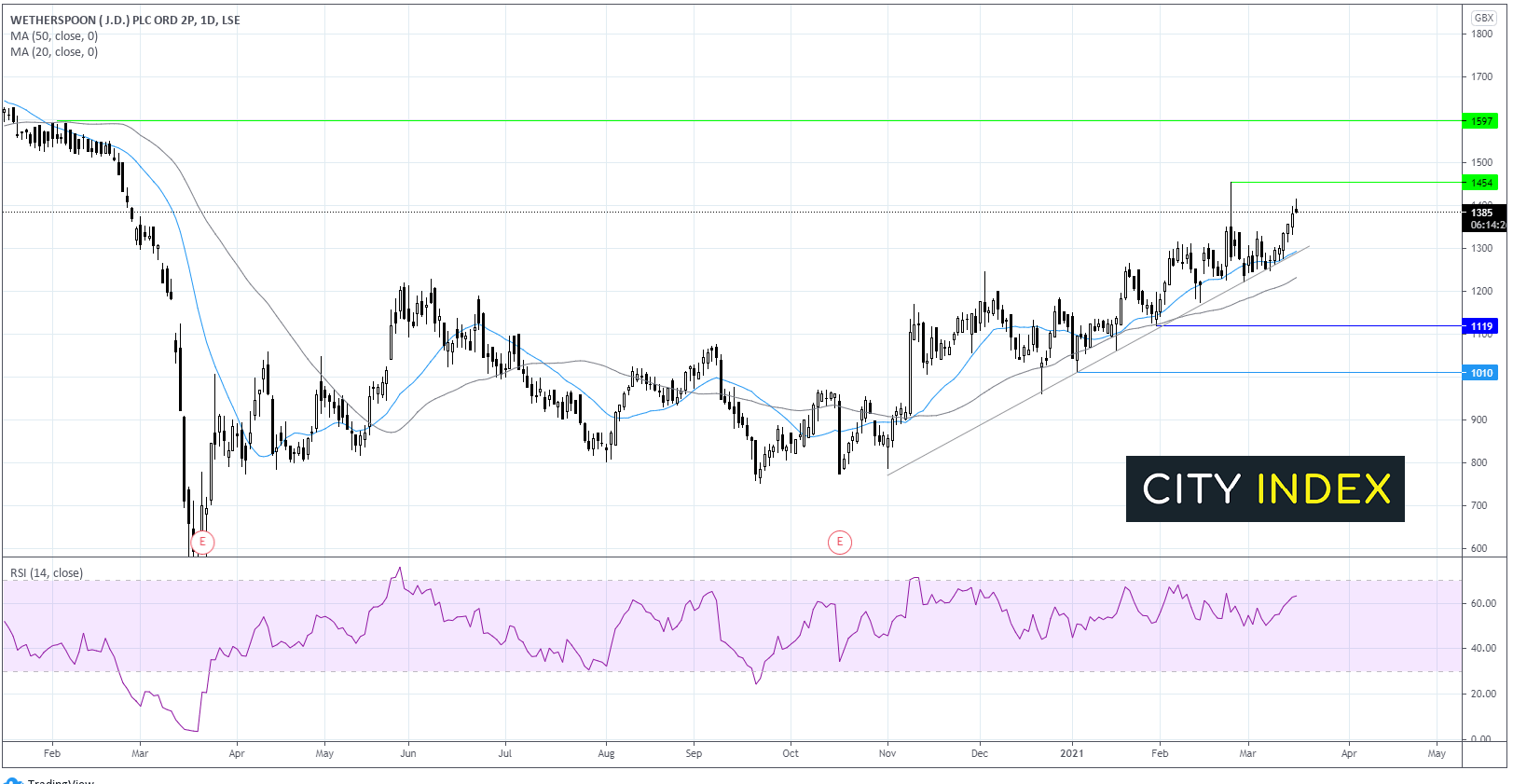