On Tuesday, it was suspected that a stray Russian missile accidentally landed in Poland, which neighbors Ukraine.  Polish PM Morawiecki convened an emergency meeting with the Council of Ministers for National Security and Defense Affairs. As a result, Poland is deciding whether it should invoke Article 4, which says “The Parties will consult together whenever, in the opinion of any of  them, the territorial integrity, political independence or security of any of the Parties is threatened.”  However, NATO Secretary-General Stoltenberg said there will be no calls to invoke Article 4 until after an investigation was complete.  It appears now that the debris which landed in Poland was not a stray Russian missile, but rather debris from anti-defense missiles fired from Ukraine.  However, it was made perfectly clear by Stoltenberg that “This is not Ukraine’s fault. Russia bears ultimate responsibility”.

As a result of the initial strike on Poland soil, USD/PLN immediately went bid from a low of 4.5081 to 4.6152.  However, as the scenario unfolded over the course of the next 24 hours, the pair moved lower to previous levels. 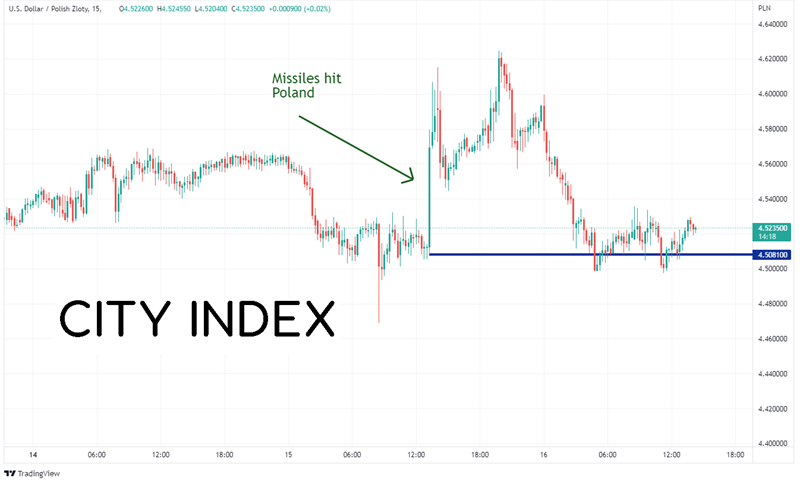 However, the daily timeframe of this chart looks like that of the DXY!  Notice the correlation coefficient in the bottom panel of the chart below.  The correlation coefficient between USD/PLN and the US Dollar Index (DXY) is +0.96.  For guidance, readings of +1.00 indicate there is a perfect positive correlation between the 2 assets and they move in the same direction 100% of the time. A reading of +0.96 is pretty close! 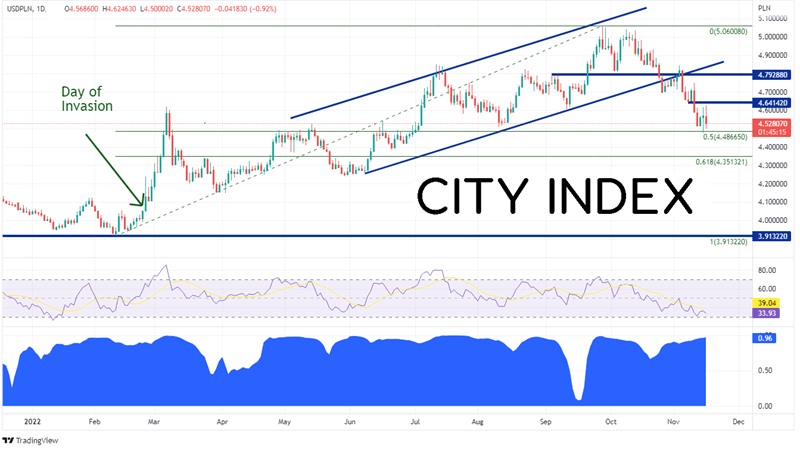 USD/PLN had been moving higher since February 10th, just 2 weeks before Russia invaded Ukraine.  After the invasion on February 24th, the pair began moving aggressively higher from a low of 4.0505 to a high on March 7th at 4.6199.  USD/PLN corrected to 4.1500 but then resumed its trend higher in an orderly channel.  The pair tested the top trendline of the channel on September 28th at 5.0601 but has been moving lower since. (The DXY peaked on that same day!) On Tuesday,  the day of the alleged missile attack, USD/PLN made a new local low at 4.4764, just below the 50% retracement level from the lows of February 10th to the highs off September 28th.

If USD/PLN continues to move lower, the first support level is the 61.8% Fibonacci retracement level from the above-mentioned timeframe at 4.3513.  Below there, support levels are at the prior lows from May 30th and March 30th at 4.2388 and 4.1500, respectively.  However, if the current support holds and price bounces, the first resistance is at the lows from November 8th at 4.6414, then the highs from November 10th at 4.7489.  Above there, price can move to horizontal resistance at 4.8138.

The missiles which landed in Poland’s territory were initially thought to be stray Russian missiles, which caused USD/PLN to move higher.  Once it was discovered that it was from Ukraine anti-defense missiles, the pair quickly returned to prior levels.  At the very least, the event showed the markets what could happen if a stray Russian missile really does hit a NATO country.  In addition, USD/PLN is heavily correlated to the DXY.  Therefore, if the DXY moves in one direction, there is a strong chance that USD/PLN moves in the same direction.