USD/JPY heading towards 20-year highs. Can the BOJ “jawbone” it lower?

The Japanese Yen has been extremely weak as of late.  As many countries around the world have begun to raise their key interest rates, Japan’s short-term interest rate sits at -0.1%.  In addition, the BOJ has said that it would target between 0%-0.25% for its 10-year JGBs.  Over the past few weeks, the Bank of Japan has entered the market to buy bonds.  In doing so, the BOJ can cap yields on the benchmark interest rate at 0.25%.  However, one of the side effects of buying JGBs is that it weakens the Yen.

In addition, Japan’s inflation levels remain low, which also keeps pressure on the Yen.  Japan’s February CPI reading was 0.9% YoY.  Compare that the CPI of the US for the same month at 7.9% YoY and the recently released March print of 8.6% YoY!  Higher inflation readings cause the home currency to rise.  This is another reason the Yen has been so weak relative to other currencies, such as the US Dollar.

Low growth also dampens the prospects for a stronger Yen.  On Monday, the BOJ lowered its assessment in 8 of 9 economic regions in its Quarterly Report, citing very high uncertainty due the effects of the Russia/Ukraine war .  The BOJ is particularly concerned about the rising cost of raw materials and on-going supply chain issues remaining from the coronavirus.  New growth forecasts are due from the BOJ at the end of April. 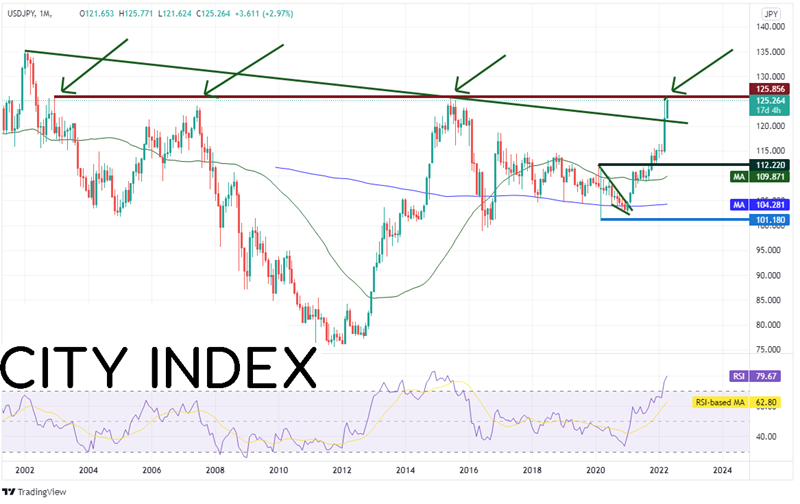 Whenever the exchange rate has reached these levels in the past, the BOJ and other Finance officials begin “jawboning” the pair lower or making threats to intervene in the market to try and keep the yen pairs from moving higher.  On Monday, a BOJ official warned that excessive Yen volatility could hurt businesses.  Today, Japan’s Finance Minister said that “We will respond to FX as needed while maintaining close communication with the US and other countries”.

Will the jawboning work to push USD/JPY lower?  It may take more than that, but USD/JPY is brushing up again the 125.85 level and thus far, the resistance in holding.  In addition, on the daily timeframe, price has formed an ascending wedge.  If price breaks below the bottom trendline of the wedge (currently near 124.20), it would target the bottom of the wedge near 121.78. Notice that the RSI is also diverging with price, indicating that price may be ready for a pullback.  Below there is the 50 Day Moving Average near 118.20. If price does move higher, the next resistance level isn’t until the psychological round number resistance at 130.00, then horizontal resistance from 2002 at 131.84. 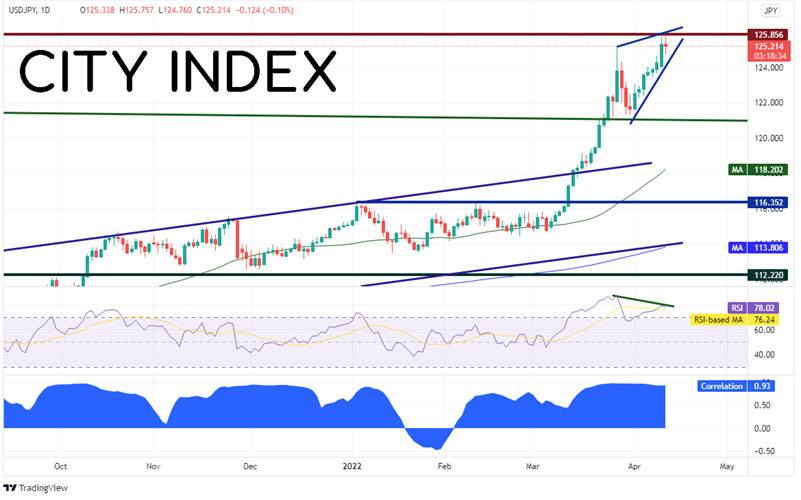 USD/JPY is also highly positively correlated with the US 10-year yield.  The current correlation coefficient is +0.93. A reading of +1.00 is a perfect positive correlation, meaning both yields and USD/JPY move in the same direction 100% of the time.  Therefore, if US yields pull back, there is a good chance USD/JPY will move lower as well (and vise versa).

There are many reasons that the yen is weak, and therefore, USD/JPY is higher.  However, if Japanese officials continue to jawbone the Yen (or actually intervene!), the pair could move lower.  In addition, due to the high correlation, if US yields move lower, it could pull USD/JPY down with it.  However, watch the 125.85 level.  If price moves above, the pair could head to 130.00.