The Fed’s favorite measure of inflation, Core PCE, was released for August earlier today. The print was 4.9% YoY vs an expectation of 4.7% YoY and a July reading of 4.7% YoY.  This follows the September EU CPI Flash, which was 10% YoY vs an estimate of 9.7% YoY and a 9.1% YoY reading in August.  For those who were hoping that inflation data was improving, these prints were just the shot in the arm they needed to bring them back to reality.  Both the Fed and the ECB are expected to raise rates 75bps at their next respective meetings, and these prints should give confidence to the central banks when raising.  In addition, there were many central bankers on the wires from both the ECB and the Fed this week.  The common theme from them was that inflation is still too high and that 75bps seems an appropriate amount to raise rates.  Also note that Germany’s inflation data was released yesterday, which also showed a 10% YoY increase vs a prior reading of “only” 7.4%!

EUR/USD has been moving in a downwards sloping channel since February, when the pair was trading near 1.1500.  The pair first broke parity on July 14th, however bounced to resistance near the 1.0340/1.0350 area. EUR/USD broke parity once again on August 14th.  The pair oscillated around that level for a month, until September 21st, when the pair finally broke lower towards the bottom trendline of the channel.  On Wednesday, the pair made a low of 0.9536, its lowest level since June 2002.  The pair has recently bounced back into the channel, running into horizontal resistance today at 0.9864. 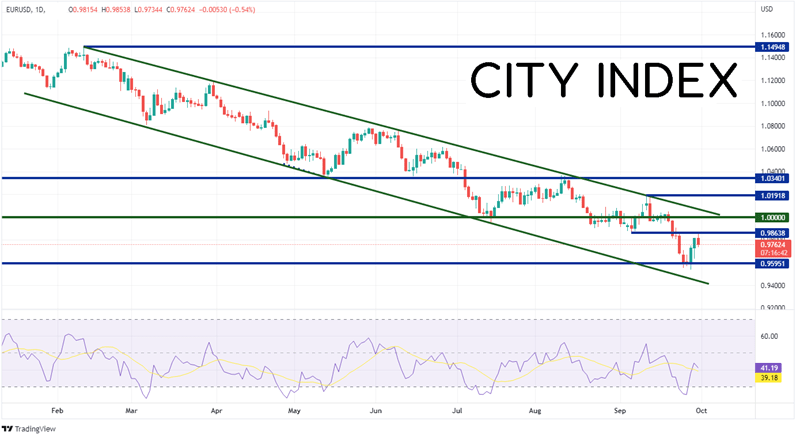 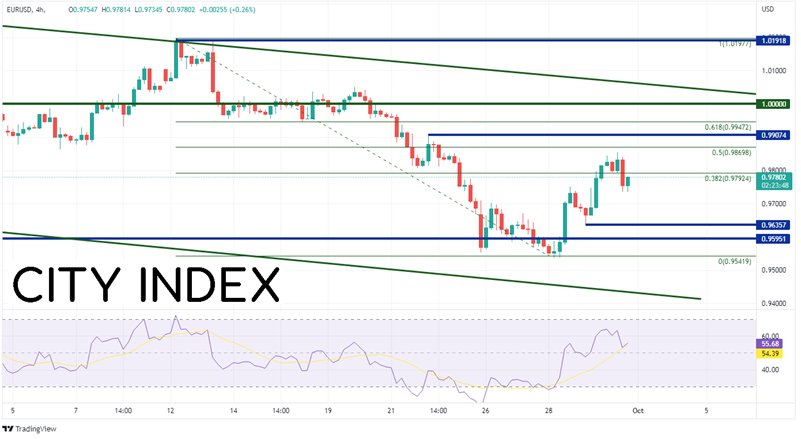 With higher than expected readings from both the August Core CPI from the US and the September Preliminary CPI from the Eurozone, higher rates from the US and the ECB are coming.  The question is a not a matter of “if”, rather than “by how much”.  Right now, markets are pricing in a 75bps rate hike for both central banks.  However, the meetings not until the end of October and there is still a lot of data which can change rate hike expectations in a hurry!