Pub and restaurant operator Mitchells & Butlers said it is aiming to raise up to £350 million through an underwritten open offer and said it has secured new debt facilities in a deal with investors and creditors to help it navigate the extremely tough environment during lockdown.

The company, which employs around 40,000 people and operates 1,600 venues, has been among many in the hospitality industry trying to survive the latest lockdown that has forced their sites to close.

The offer will be for 167 new shares being priced at 210 pence each, a vast 36% discount to its closing share price on Friday.

The FTSE 250-listed company said its three largest shareholders – Piedmont, Elpida Group and Smoothfield Holding – had banded together and combined their 55% stake in the business under one consortium named Odyzean. Odyzean is underwriting the offer and is willing to buy any shares that are not taken-up, meaning it could build its majority stake in the company even further.

The trio of shareholders, wielding control over the business, have said they want to streamline decision making at the company by possibly removing some independent non-executives but said it supports the management. The investors intend to work with management to ‘ensure the strategy and structure of the business are appropriate to optimise its long-term success and that the time and cost devoted to public company matters are reduced.’

Mitchell & Butlers has also secured a new £150 million, 3-year unsecured revolving credit facility from its lenders, conditional on the open offer being completed. This will also secure it waivers and amendmensts to help it avoid potential breaches of its debt facilities during the pandemic.

Mitchells & Butler trades over its ascending 20 & 50 sma on the daily chart. It has been in an established bull trend since early November when the 20 sma crossed above the 50 sma in a golden cross formation.

Dip buying and the RSI is bullish territory are supportive of further upside to come until the RSI tips into overbought territory.

Immediate resistance can be seen at 368p February’s high, ahead of 390p a level last seen in late March. A break-through here could see the share price advance to 425 recovering all its pandemic losses. 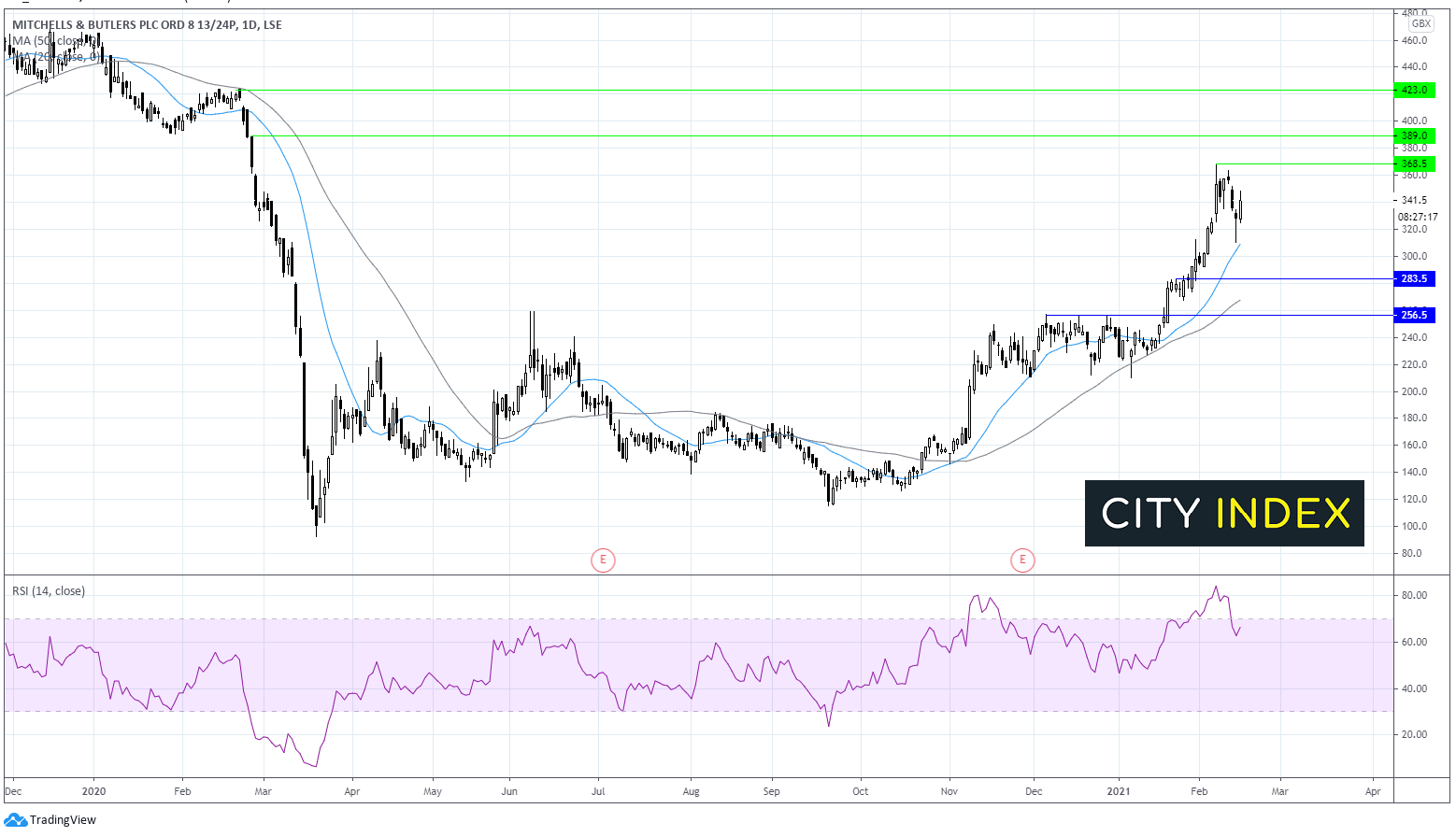 Below is a guide to the top news from the FTSE 100 today.

Vodafone said Vantage Towers has continued to build on strong momentum ahead of an expected spin-off and IPO later this year.

Vantage Towers, which manages telecoms infrastructure across Europe, added 1,400 new tenancies and 450 new macro sites in the last nine months of 2020. It also signed new deals with Eir and Three in Ireland and with 150 local operators in Spain, while also signing an Internet-of-Things contract with Sigfox in Germany.

‘The growth opportunity in Europe is considerable, as the roll out of 5G accelerates and mobile operators look to expand their networks to manage ever increasing data traffic,’ said Vivek Badrinath, chief executive of Vantage Towers.

‘I am very pleased with the commercial momentum we are building at Vantage Towers. Customers are appreciating the high quality of our grid and their response to our focused commercial approach is encouraging. This underscores our confidence in our tenancy targets’, he added.

Vodafone said it expected Vantage Towers to make EUR375 million to EUR385 million in recurring free cashflow over the full year to the end of March, in line with its previous guidance.

Kakoullis has spent his career at Deloitte where he joined as a graduate and worked his way up to being its global head of audit and assurance practice until he left in May 2019.

‘We are delighted to announce the appointment of Panos as chief financial officer who will join us in May this year. Panos delivered significant transformational change at Deloitte, streamlining and simplifying the business and we look forward to benefitting from his expertise and experience as we deliver on our fundamental reorganisation and secure a sustainable and prosperous future for Rolls-Royce,’ said chief executive Warren East.

Kakoullis will take up his role on May 3. Notably, Daintith, who has got a new job at Ocado, is leaving on March 19 and deputy CFO Ben Fidler will become interim CFO until Kakoullis joins.

Ocado released its own statement this morning that said Daintith will join the company as CFO on March 22.

Below is a guide to the top news from the rest of the UK market.

Learning Technologies Group said it has agreed to buy learning and talent development software provider getBridge from Instructure for $50 million in cash.

Total revenue generated by getBridge in 2020 amounted to $21 million with a loss before interest, tax, depreciation and amortisation of $1.3 million.

‘With the operational synergies that will be created with the rest of the group, LTG expects Bridge to become earnings accretive from H2 2021 and to align with its typical software division margins by early 2022,’ said Learning Technologies Group.

Learning Technologies Group shares were up 2.9% in early trade at 177.9.

MJ Hudson said it has completed the acquisition of Bridge Fund Management after securing regulatory approval from the Central Bank of Ireland. The deal was originally announced in October 2020.

Bridge Fund Management, better known as Bridge Group, is a funds service provider based in Dublin that reported impressive 44% organic revenue growth in the year to the end of September 2020, underpinned by a ‘solid new business pipeline’ that extends until the end of 2021.

‘The acquisition of Bridge Group adds an important funds centre to MJ Hudson´s network. It also brings a number of new international asset management clients, at least three of which, on a recurring revenues basis, will enter the top 10 list for the group as a whole,’ said MJ Hudson.

MJ Hudson said there will be more news on the combination with Bridge Group and the company’s recently enlarged business outsourcing division when it releases its interim results on March 23.

Below is a guide to the top news about upcoming UK IPOs.

You can read more about these IPOs and other potential upcoming IPOs in our Top UK IPOs to Watch out for in 2021.

Cyber security company Darktrace has seen its plans to launch a London IPO suffer a setback after one of the investment banks advising the business resigned, according to Sky News.

Darktrace has thought to be preparing for a £4 billion IPO but Swiss bank UBS, which had been hired alongside Jefferies to lead the offer, is reported to have resigned because its compliance department decided it could not file the Suspicious Activity Reports needed to fulfil its role.

Sky News said an unnamed source said the resignation was because of a ‘UBS issue, not a Darktrace issue’. The Darktrace IPO is reported to remain on track despite the loss of UBS.

Notably, the bank’s resignation comes after a Dutch Court ruled its new chief executive Ralph Hammers should face investigation into a money-laundering scandal at ING, which he ran before joining UBS.

The news builds on reports that banks have been concerned about working on the Darktrace IPO because of regulatory concerns. One of its shareholders was sentenced to five years in a US prison for fraud in 2019, and another is facing extradition proceedings over alleged fraud involving a deal that led to Hewlett Packard buying a company he founded named Autonomy for $11 billion in 2011.

Fintech start-up PensionBee will allow its customers to buy shares in the business using their savings under plans to list in London, the Financial Times reports.

PensionBee intends to send invitations asking customers to register their interest in its IPO later this year, allowing them to link their pension accounts to the IPO and buy shares when the offer is launched.

Notably, existing shareholders are not expected to sell shares as part of the IPO, suggesting the company is going public solely to raise funds for growth rather than as a way for early investors to monetise their investment.

Russian discount retailer Fix Price is planning to launch an IPO in London that could value the business as high as $6 billion, the Financial Times reports.

The IPO is expected to raise up to $1 billion and happen in March. Fix Price has a business model similar to that of B&M European Retail Value in the UK and Europe and operates 4,200 stores in Russia.

Make sure to keep up to date on the IPO market, as new listings will be available to trade on the first day of dealings after the listing has been completed.