Capita said it is restructuring its business and selling-off a number of non-core businesses to help get the company back on track after a tough 2020 plagued by the coronavirus pandemic, with hopes of returning to growth this year.

The outsourcing company, which specialises in providing IT-based services to the public and private sectors, said adjusted revenue fell 9% year-on-year to £3.18 billion from £3.50 billion as a result of weaker demand during the pandemic and a number of contracts being lost in 2019.

Capita said its results were in line with the expectations set out at its interim results.

‘Capita responded robustly to the challenges of 2020, including the Covid-19 crisis, delivering strong adjusted free cash flow and better than expected net debt, as well as winning £3.1 billion of contract value,’ the company said. ‘Capita is now a much better business than at the start of the transformation, with materially improved client relationships and growth prospects.’

Capita said it intends to simplify the business further by restructuring into two core divisions – Capita Public Service, which will serve government contracts, and Capita Experience, which will target work with blue-chip businesses in the UK and Europe.

The rest of the business will be classed as non-core, placed into a third division and eventually sold, with Capita aiming to make £700 million in disposals, of which it hopes to make £500 million in 2021.

This, Capita said, will allow it to return to organic revenue growth this year after reporting annual drops for the last six years. It also said the restructuring would allow for more sustainable cash generation from 2022 onwards.

The Capita share price has been on the rise since late January. It trades above it 20 & 50 sma on the daily chart and also above its 6-week ascending trendline.

The RSI has also moved out of overbought territory so there is potential for further upside.

However, resistance sits at 52 the level which capped gains in June, July, November and December of last year; a level which is proving a tough nut to crack. A move beyond this level could see the bulls look towards 60p round number as the share price attempts to make head way towards its pre-pandemic 150p level.

On the flip side, immediate support can be seen at 45.7 the ascending trend line support. Beyond here support at 44 a low March 11 comes into play ahead of 42 resistance turned support. 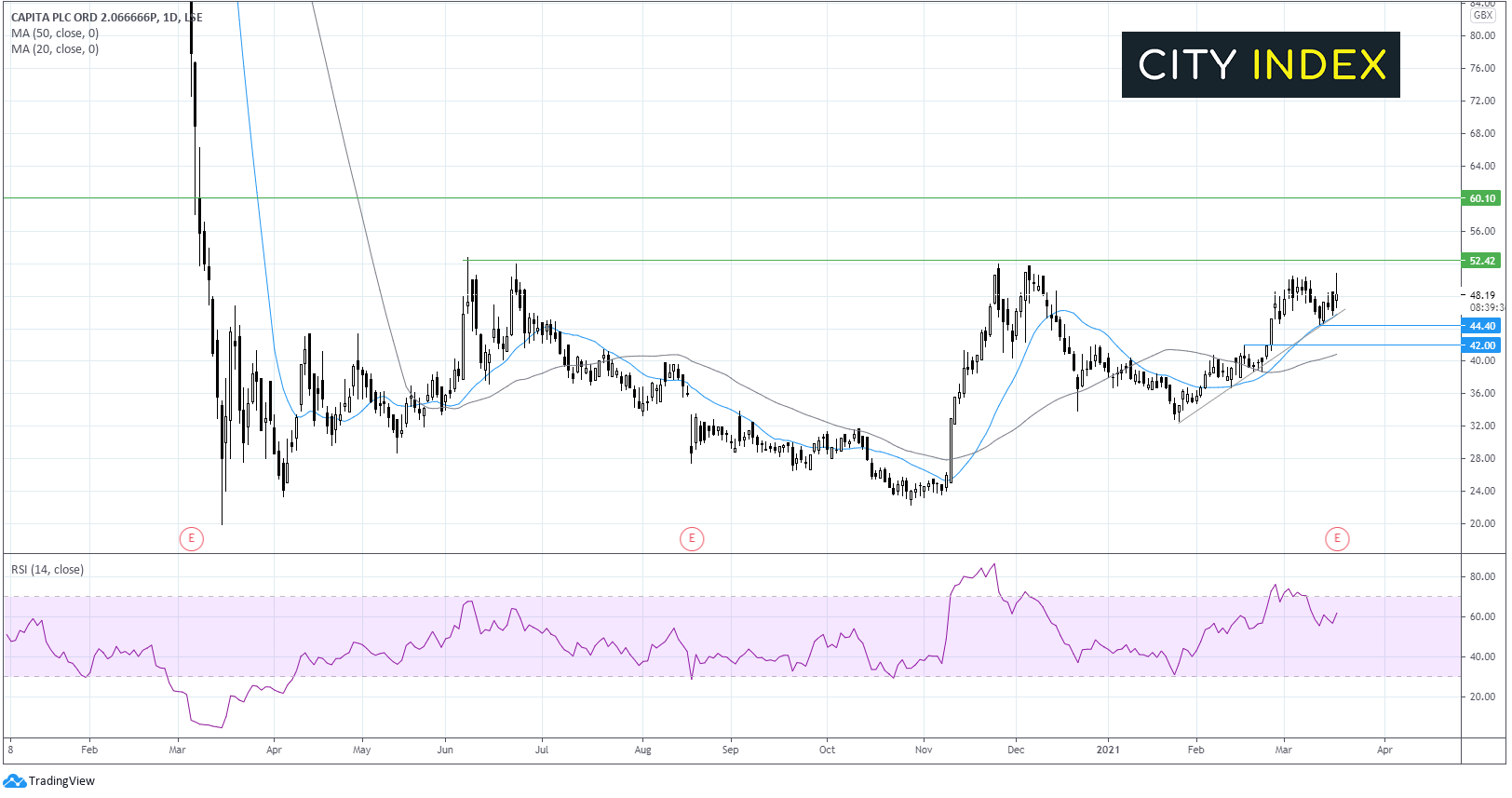 Carnival said P&O Cruises will run a series of short cruises around the UK coast this summer for customers that have been vaccinated.

The company said its flagship Britannia and its new ship named Iona will depart from Southampton between June and September to sail around the UK coast for three or four night breaks, and one six-night journey.

Britannia will complete two cruises around the south-coast while its new ship Iona will complete its maiden journey from Southampton to the Scottish island of Iona before completing a second trip along the coast of France.

‘Given the advanced progress of the UK vaccination programme, and strong expressed preference on the part of our guests for this limited series of UK coastal cruises, these sailings on Britannia and Iona will be for UK resident Covid-19 vaccinated guests only,’ said Carnival.

Passengers will need to prove that they have had their second dose of a vaccine at least seven days before departure. Carnival said it would outline the exact type of documentation that will be required at a later date.

Safety measures such as social distancing and face masks will still apply in ‘certain areas of the ship’ while crew will undergo strict testing and quarantine measures, Carnival said.

Carnival and the wider industry have been raring to restart operations but there are concerns following some cruise ships being hotbeds for the virus when the pandemic erupted last year. This is why the industry is likely to restart with more domestic cruises rather than international ones.

Serco has won a contract to provide support services at the 5 Wing Canadian Forces Base in Goose Bay, Canada. The deal will last for an initial 10 years and be worth a maximum of £400 million, with Serco expecting to book annual revenue of £20 million to £30 million in the first few years.

Notably, there are options to be extended by two five-year periods which could push the maximum value of the entire contract to £870 million over 20 years.

Serco will continue to provide a number of services from providing fire and rescue services and removing ice on site to managing IT systems and security.

‘Goose Bay has been operated successfully by Serco for more than 20 years and we are delighted to have been selected to continue to support the Canadian Department of National Defence on what is a vital piece of national infrastructure.  I am very proud of the work we have done there, including both the service delivery to the Canadian Armed Forces and Serco's work with the local community.  The new contract will allow us to build on both of these areas,’ said chief executive Rupert Soames.

SSP Group has launched a rights issue to raise up to £475 million in order to strengthen its financial position and secure breathing space from its lenders as it continues to burn through cash whilst the travel sector remains depressed.

The company, which runs restaurants and food outlets targeting travellers, said it was launching a fully underwritten rights issue that will allow investors to buy 12 new shares in the business for every 25 they already own.

‘Over the past year the group has experienced an unprecedented period of disruption in the travel sector. Early and extensive action has enabled us to protect the business and put ourselves in the best possible position to emerge strongly as the market recovers,’ said chief executive Simon Smith.

The funds will help ensure that it can cope under its ‘reasonable worst case scenario’ by covering the £300 million facility that is due to expire in February 2022. However, the rights issue will also secure extensions to other bank facilities that were due to mature in July 2022 to January 2024 and secure waivers to upcoming covenant tests.

‘Strengthening the balance sheet now will underpin the business if the recovery in the travel sector is slower than we anticipate and it gives us the capacity to invest in growth opportunities as we emerge from the pandemic. Our current expectation is that the early recovery will be led by domestic and leisure travel from which we are well-placed to benefit,’ Smith said.

SSP said it expects passenger numbers in the travel industry to fully recover by its 2024 financial year, ‘led by a rebound in domestic and leisure short-haul air and rail travel.’ It is expecting its adjusted Ebitda margin to return to pre-pandemic levels ‘in the medium term’. The rights issue will allow it to shore up the balance sheet enough to weather the crisis and free up more funds to invest in the business to ensure it is ready to capitalise as the travel industry recovers, including by opening 90 new units.

‘We are ready to re-open rapidly, welcome back our teams, and provide our travelling customers with a great service when they return. Looking further ahead, the actions we're taking will allow us to capitalise on the recovery as well as future new business opportunities, enabling us to deliver long term sustainable growth for the benefit of all our stakeholders,’ Smith said.

Regulator Ofcom auctions off airwaves on a variety of radio frequency bands to the big telecoms companies, which can then be used to provide communication services to customers. This auction offered 200 MHz of spectrum across two bands - 80 MHz in the 800 MHz band, ideal for wide-area coverage, and 120 MHz in the 3.6-3.8 GHz band, ideal for 5G in more densely-populated areas.

BT Group’s EE, the largest network in the country, spent £452 million in total and secured the most capacity. Vodafone spent £176.4 million on securing airwaves on the higher band. Hutchinson 3G spent £280 million while Telefonica spent £448 million.

‘With bidding in the principal stage concluded, we now move to the next stage of the auction where the operators will have an opportunity to negotiate the position of their spectrum holdings in the wider band,’ said Philip Marnick, the director of spectrum at Ofcom.

‘This is an important step forward in bringing better mobile services to people - wherever they live, work and travel. These airwaves will help improve coverage for the mobile services people use today, as well as supporting the UK's position as a world leader in 5G,’ he added.