Vodafone said service revenue returned to growth in the third quarter of its financial year, putting it on course to hit its full year targets.

The telecoms giant said organic service revenue, which accounts for the bulk of its total topline income, grew 0.4% in the last three months of 2020, as a 1.1% decline in central Europe was offset by stronger performances elsewhere and from Vodacom. Its largest individual market in Germany performed well, with revenue growing 1% on both a reported and organic basis.

The 0.4% growth was considerably better than the 0.1% drop forecast by analysts, according to Reuters.

‘I am pleased the group returned to service revenue growth in Q3 as a result of the continued commercial momentum across our business, including our largest market Germany. Our good trading performance underscores our confidence in the outlook for the full year,’ said chief executive Nick Read.

Vodafone said the performance has kept it on track to deliver its full year guidance of adjusted earnings before interest, tax, depreciation and amortisation of between EUR14.4 billion to EUR14.6 billion and free cashflow of at least EUR5 billion excluding spectrum and restructuring costs.

That would compare to adjusted Ebitda of UR14.88 billion in the last financial year and free cashflow of EUR5.7 billion.

Vodafone said it has also continued to progress its plans to spin-off Vantage Towers in ‘early 2021’.

Vodafone shares had been in consolidation mode since mid-December.

Today’s jump higher has seen the share price break out of the symmetrical triangle pattern to the upside, briefly piercing horizontal resistance at 132.5 high 27th Jan before easing back. The breakout suggests there could be more upside to come.

On the flip side, the descending trend line of the symmetrical triangle at 128. 25 offers support an important level for the bears. 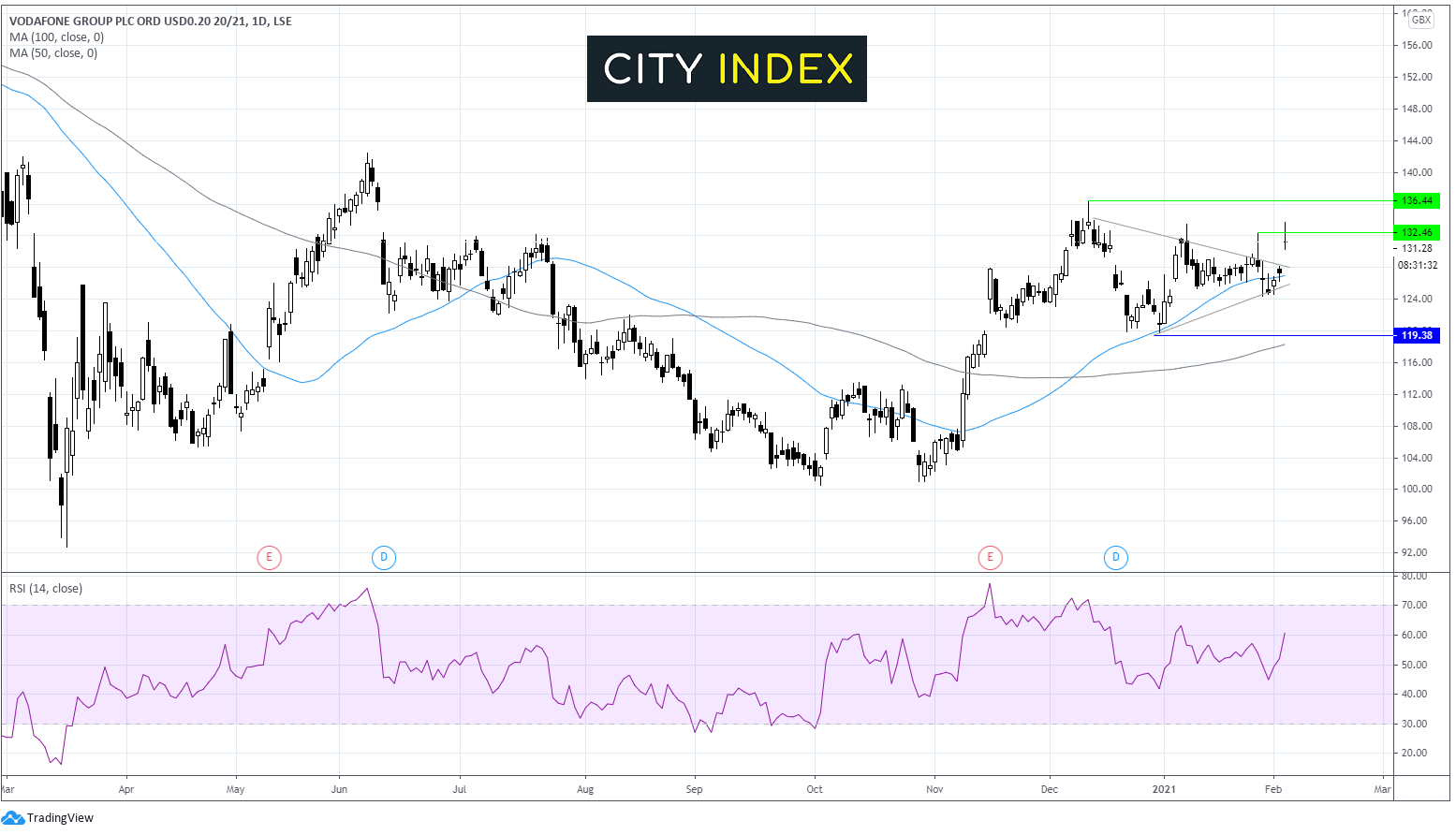 Below is a guide to the top news from the FTSE 100 today.

GlaxoSmithKline has agreed to help CureVac ramp-up production of its coronavirus vaccine as the pair agreed to develop new vaccines to target the emerging variants of the virus.

The agreement will see the launch of a new EUR150 million collaboration between the two firms that will see GSK help manufacture up to 100 million doses of CureVac’s vaccine in 2021 using its manufacturing plants in Belgium. The pair will then also look to develop a new vaccine to target new variants of the virus.

‘Through this new exclusive co-development agreement, GSK and CureVac will contribute resources and expertise to research, develop, and manufacture a number of novel mRNA vaccine candidates, including multi-valent and monovalent approaches. The aim of this work is to offer broader protection against a variety of different SARS-CoV2 variants, and to enable a quick response to new variants potentially emerging in the future,’ said GSK.

The development of the new vaccines will start immediately with the hopes of introducing the first one in 2022.

‘The increase in emerging variants with the potential to reduce the efficacy of first generation COVID-19 vaccines requires acceleration of efforts to develop vaccines against new variants to keep one step ahead of the pandemic. These next generation COVID-19 vaccines may either be used to protect people who have not been vaccinated before, or to serve as boosters in the event that COVID-19 immunity gained from an initial vaccination reduces over time,’ GSK added.

GSK is paying EUR75 million upfront to hold the rights to sell CureVac’s vaccine everywhere apart from Germany, Austria and Switzerland, and could pay a further EUR75 million in the future through milestone payments.

‘With the midstream starting the year with low levels of rough and polished inventories, and following strong sales of diamond jewellery over the key holiday season in the US, we saw good demand for rough diamonds at the first cycle of the year as midstream customers sought to restock and to fill orders from retail businesses,’ said chief executive Bruce Cleaver.

‘Sales of rough diamonds are also being supported by expected demand ahead of Chinese New Year and Valentine's Day. While risks to recovery as a result of ongoing restrictions on the movement of both people and goods persist, we have been encouraged by demand conditions,’ he added.

Glencore said it produced less commodities in 2020 than the year before as production was disrupted by the pandemic and other issues.

Ferguson to dual-list in the US in March

Ferguson said it expects to dual-list on the New York Stock Exchange in ‘early March’.

The plumbing and heating specialist makes the bulk of its revenue in the US and secured approval from shareholders to list there in July 2020. Ferguson intends to retain its premium listing on the London Stock Exchange and will remain part of the FTSE 100.

Below is a guide to the top news from the FTSE 250 today.

Unite Group said it has decided to extend the 50% rent discount offered to students for a further three weeks, costing the company a additional £6 million.

The student accommodation provider introduced a 50% discount on January 11 and said the new extension was made to reflect the government’s decision to keep the country in national lockdown until at least March 8.

All students that applied for the original four-week discount will now automatically get the same discount for another three weeks. It will also allow students to stay for an extra month after the academic year ends if they wish.

The three-week extension will cost £6 million in income, equal to 1.5 pence of earnings per share. The total cost of the seven-week discount and the new tenancy extension is up to £15 million, or 4p of EPS.

Unite Group said it has continued to collect most of the rent due from students despite the difficult conditions, with 91% of rent collected for the 2020/21 academic year. Notably, students have to keep up with payments in order to be eligible for the discount or the extension.

Wizz Air operates at just 27% of capacity in January

Wizz Air said it operated at just 27% of its capacity during January as it reported a steep fall in passenger numbers because of the coronavirus pandemic.