The Fed’s mention of a recession weighs on oil prices

Jerome Powell gave his most explicit warning yet that the US could enter a recession as they aggressively hike rate to fight inflation. Whilst he reiterated that they aim to bring down inflation without causing a recession, the housing market is slowing and a soft landing would be “challenging”. And whilst he added that “I don’t think we will provoke a recession”, it is still a big step for him to openly acknowledge it when compared to prior speeches. 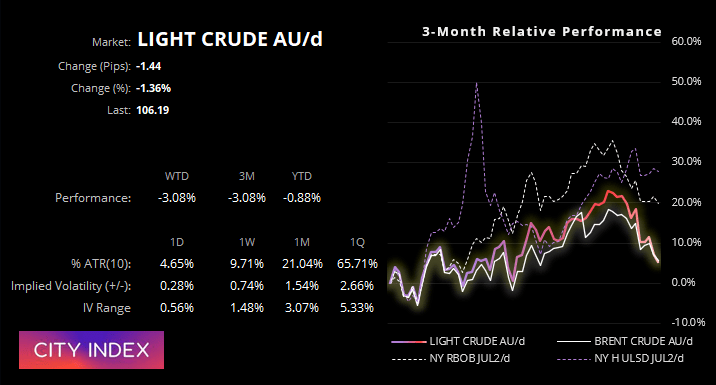 Whilst the Fed still intend to aim for a soft landing, it is not an easy challenge. The IMF and World Bank have again revised global GDP lower which suggests lower demand for oil. And talk of a recession can dent sentiment to the point that it weighs on consumption, allowing inflation expectations and realised inflation lower with it. In turn this could ease the strain on consumer and business sentiment and remove the pressure on central banks to tighten, which could inadvertently be a bullish cue for risk assets. It may be a long shot and will take time to play out (if at all) but certainly something to consider. 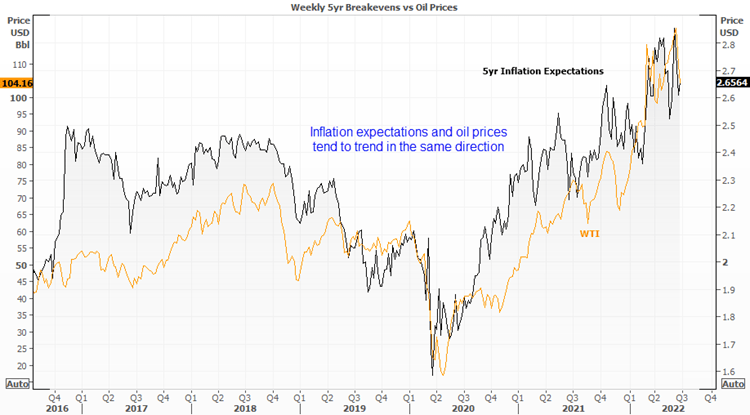 Politics at the pump

On the political front, Joe Biden is desperately doing what he can to help US consumers at the pump by calling for a 3-month ban of gasoline tax. That won’t quite get him to the midterm elections, so perhaps he’s hopeful the worst will be behind them (by then) or simply go for an extension. Nancy Pelosi said they will gauge support from the Democrat Party, yet took the rare step of not endorsing it – which hints at no support.

Biden has also faced criticism over his plans to visit Saudi Arabia to discuss the oil crisis, where he likely wants increased output ahead of next month’s OPEC+ meeting. And just last week he wrote a letter to major oil companies asking them to increase output. 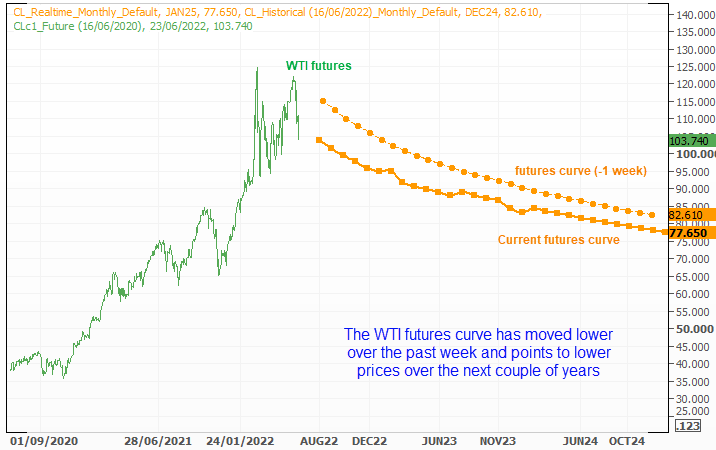 Markets already expect oil prices to move lower over the next couple of years, as can be seen on WTI’s forward curve. The market is in ‘backwardation’ as future prices trade at a discount to current prices. But more importantly is shows the entire curve has moved lower over the past week. And that could be good for inflation expectations. 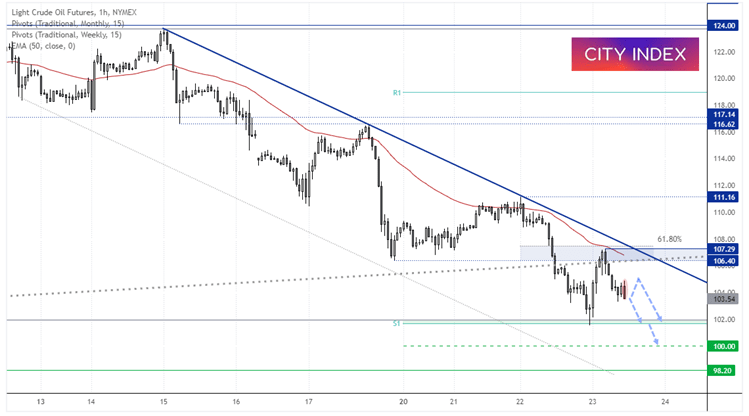 WTI futures fell to a 1-month low yesterday and, whilst they rose into the close, have gapped lower today in Asia. There’s some noise around the December 2021 trendline and the market needs to decide which way it wants to break from it. But the 1-hour chart trades within a bearish channel with a series of lower highs and, for now at least, looks comfortable below the 106.40 – 107.30 resistance zone. A bearish engulfing candle is trying to form so if USD strength can make a comeback it may be able to retest the support zone around $102, a break beneath which exposes $100.