South African Rand is looking past the pandemic

South African Rand is looking past the pandemic

Last week, the South African Reserve Bank (SARB)  left rates unchanged at a record low of 3.25%.  They said that the path of recovery depends on the pace of vaccine rollout and the path of the coronavirus.  Same story, different central bank.  However, the SARB increased their 2021 GDP outlook to 3.8% from 3.6%  and the 2021 inflation forecast to 4.3% from 4%.  Since then, the South African Rand has gone bid as hasn’t looked back!  South Africa’s manufacturing PMI for March (released today) rose to 57.4 vs 53 in February and an expectation of 55. It was the highest level since October 2020. As a result, the Rand has accelerated its rise.

USD/ZAR has been in a long term downward sloping channel since early April 2020. The pair began moving sideways within the channel through January and February, and briefly broke above the top trendline of the channel in mid-March, only to pull back a few days later.  The sideways/false breakout since mid-December (within the channel) has allowed the RSI to unwind from oversold territory and it is currently mid-range. 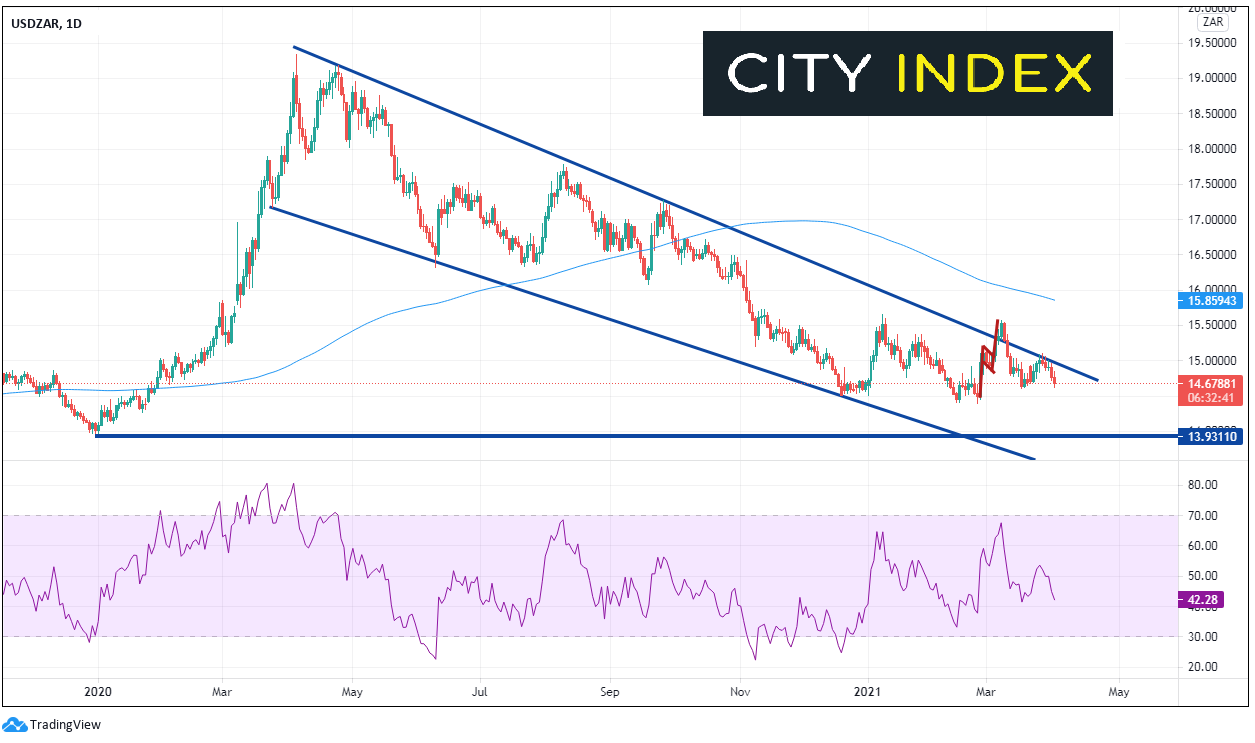 Once USD/ZAR pulled back within the channel, the pair continued moving lower and is currently testing near term support at 14.6110.  The February lows at 14.0589 are the final support ahead of the January 2020 lows at 13.9311.  Horizontal resistance is above at 14.8586 and the near-term downward sloping trendline is just above, near 14.96.  Above there, horizontal resistance is at 15.2768, just before the March highs at 15.5705.  However, notice on the daily timeframe that the RSI is in neutral territory and the bottom trendline is currently near 13.50. Therefore, price may still have plenty of room to still move lower! 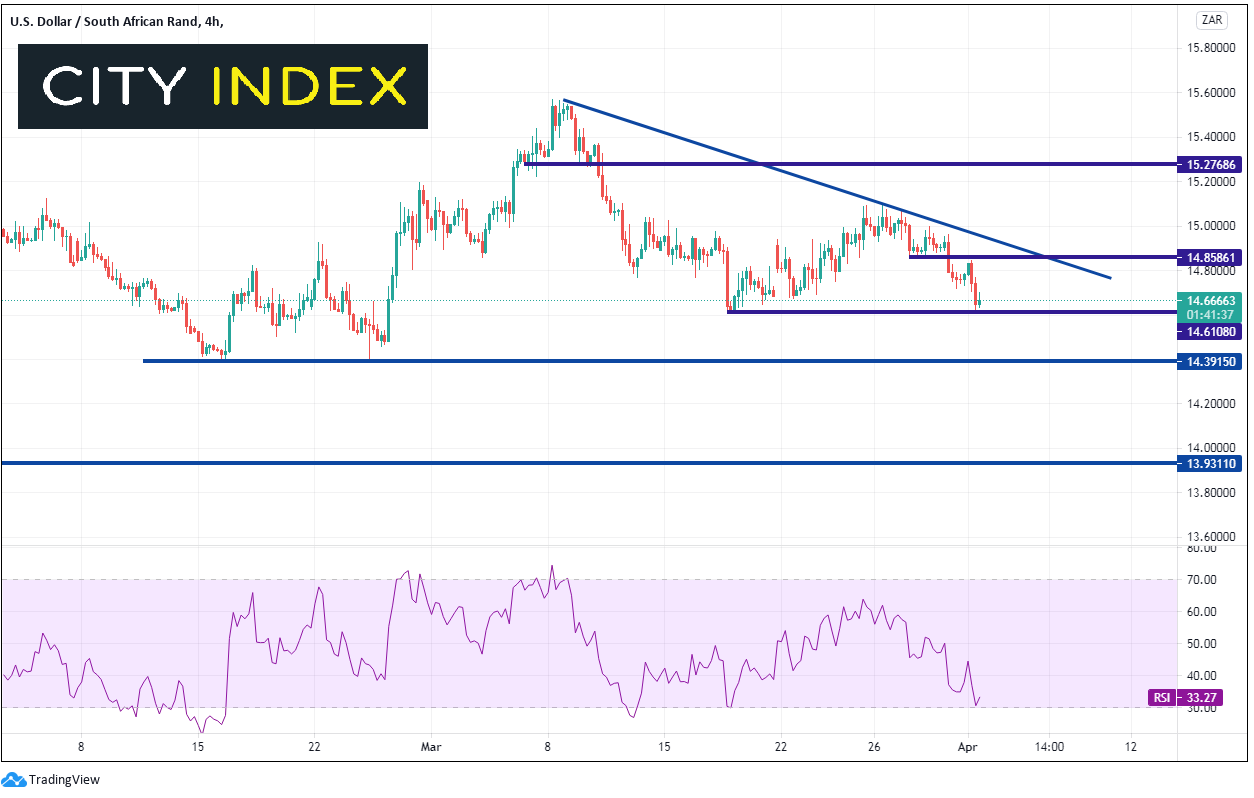 Notice the Rand is just as strong vs the Japanese Yen as well.  On a daily timeframe, price had been in an ascending wedge after putting in lows in April 2020.  The expectation from an ascending wedge is that price will break lower.  However, ZAR/JPY had no problems breaking above horizontal resistance from February 2020 and then above the TOP upward sloping trendline of the wedge.  There is some resistance near current levels at 7.544, however ZAR/JPY appears to have the December 27, 2019 highs in its crosshairs at 7.8255. Support is back at the top rising trendline of the wedge and the March 18th highs near 7.4540, then the previous resistance at 7.215. 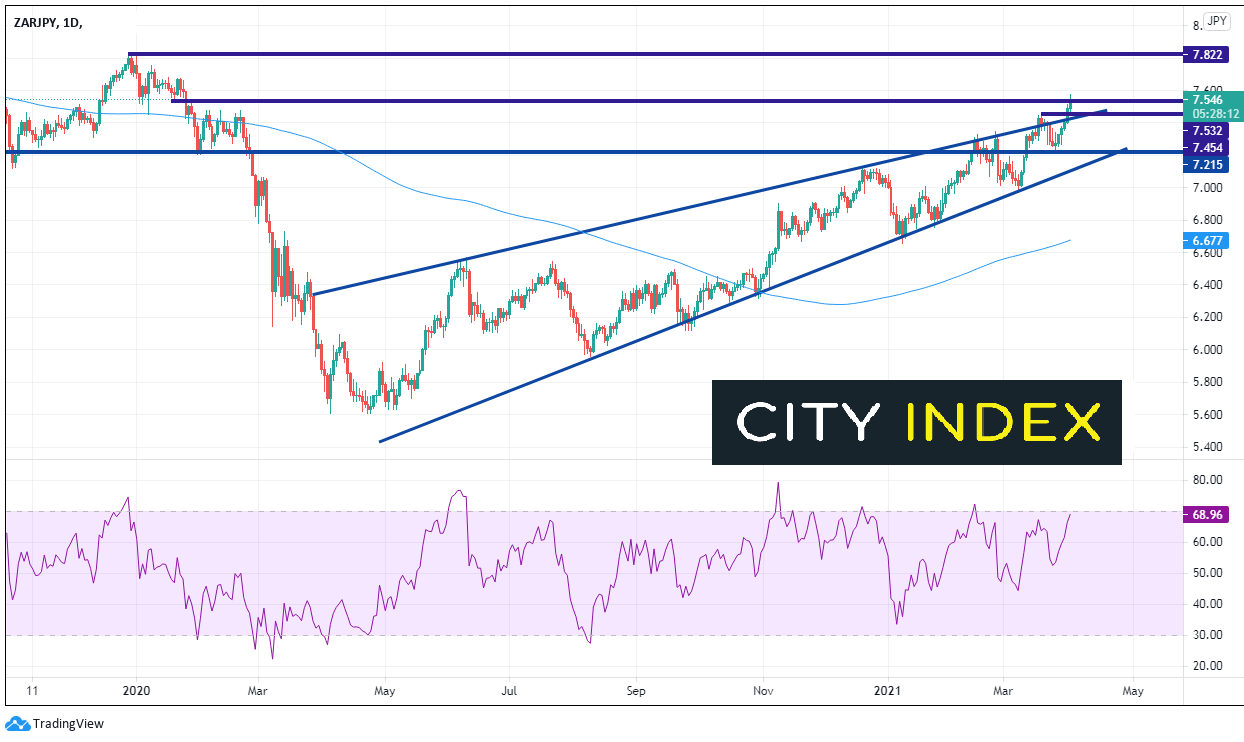 The Japanese Yen has been weak against many currencies this year.  However, the Rand has been strong vs the British Pound as well.  Just as with the US Dollar, GBP/ZAR has been in a downward sloping channel since the pandemic highs in April 2020.  The pair bounced off horizontal support and the bottom downward sloping trendline of the channel in late December. It then bounced to the upper trendline in March, allowing the RSI to unwind.  The pair is currently testing the 61.8% Fibonacci retracement from the December 22nd, 2020 lows to the March 8th highs, near 20.1850.  February 15th lows are just below at 20.035 and then the December 22nd lows near 19.38.  Resistance is at March 29th highs near 20.7985, then the 200 day Moving Average at 21.0481.  However, just as with the US Dollar, the RSI on the daily timeframe is in neutral territory and the bottom trendline is currently near 18.40. Therefore, price may still have room to move on the downside.

The South African Rand has been stronger for much of the last year, and that trend may continue.   With GDP and inflation forecasts revised higher by the SARB, traders seem to be looking past the pandemic and looking for a stronger Rand.