The FOMC day finally arrives, and we are seeing some mild dollar selling ahead of it which is boosting the appeal of precious metals, yen and franc. Understandably, however, investors are refraining from opening any bold positions ahead of the Fed’s announcement. Will gold and silver be able to stage a reversal despite another likely 75 basis point hike from the Fed?

Investors are certainly assessing whether the front-loading of interest hikes in the US will only help to bring forward a potential recession and thus the time of eventual and inevitable interest rate cuts. At the same time, they realise that the Fed is not the only bank hiking rates, so it is a balancing game for FX traders.

For precious metals traders and investors, there are two main factors to consider today. First, the rate decision itself – will it be 75 or 100 bps? Second, how the Fed views the economy and inflation in the months ahead to provide possible hints about the pace of tightening in the months ahead.

Before we discuss these points, let’s focus on precious metals prices first.

As far as the two precious metals are concerned, I am starting to like the potential of a sharp silver recovery given the fact that the gold-silver ratio has reached levels not seen since the height of the pandemic. In fact, the ratio has started to react after testing its pre-covid high of 93.34: The ratio is likely to decline more sharply if silver find more demand as it tests THIS key support area: 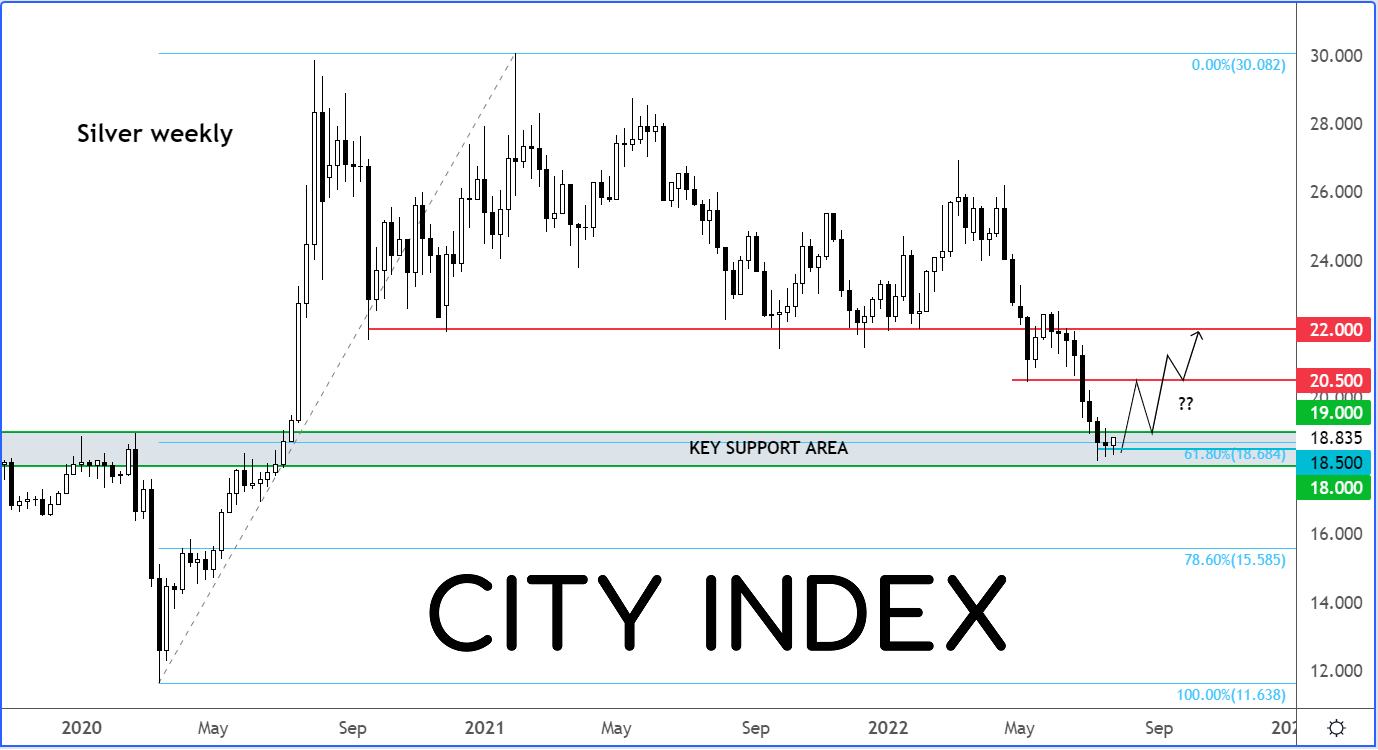 The precious metal has spent a couple of weeks trying to figure out what it wants to do around long-term support area between $18 to $19, as per the above chart. Here, it has created several conflicting signals on the daily time frame in the last few days. The lack of follow-thru has frustrated both the bulls and bears alike. But on the weekly time frame, it looks like a possible bottom is being formed here, with prices turning positive on the week now.

That is, if the Fed doesn’t stand on the way!

The Fed certainly wants to achieve a soft landing, but recent signs suggest it might be more than just a soft-landing that the world’s largest economy is heading into.  Given the very hot inflation, it makes sense to continue with aggressive hikes for now. This is why a majority of analysts expect a 75-basis point rate hike today as the Fed attempts to bring 4-decade high inflation under control.

But what about September and beyond? We have seen signs of weakness in data, boosting recession fears. The big falls in commodity prices have also increased talks of peak inflation. The Fed will be aware of these developments and may therefore signal a slowdown in hiking. If that’s the case, then I would expect the dollar to drop, providing a good boost for precious metals.

As my colleague Matt Weller wrote in his full FOMC preview, a 75-basis-point hike will put all the focus on Fed Chairman Powell’s accompanying press conference. According to Weller,

For analysts at Goldman Sachs, a convincing turn in the Dollar will “likely require more calming inflation news and more balanced Fed policy. While some of the very recent news on inflation has been encouraging, we think a tactical Dollar selloff will require some acknowledgement of this by Fed officials this week… we will primarily be focused on whether officials broaden that criteria to put more focus on slowing activity data. Until that shift is clearer, it will be difficult for the market to price a more accommodative Fed and a weaker Dollar.”