Shopify earnings preview: what to expect from Q4 results

When will Shopify release its Q4 results?

Shopify will release results for the fourth-quarter (Q4) and full year 2020 on Wednesday February 17.

Shopify earnings consensus: what to expect

Investors will be hoping Shopify can continue to deliver extraordinary growth after booming during the pandemic. Many businesses, particularly smaller ones, have rushed to Shopify to create an online sales channel as physical stores struggle during lockdowns, which in turn has also encouraged more people to shop online.

This has benefited both its main sources of revenue. Subscription revenue has experienced strong growth as more merchants join the platform to tap into customers online, while revenue from transactions has benefited from the jump in sales conducted through Shopify sites.

In Q1 2020, before the pandemic started to cause disruption, revenue jumped 47% year-on-year. That then significantly accelerated as lockdowns were introduced and people and business started to shift online, with year-on-year growth of 97% in Q2 and 96% in Q3. Smoothed out, revenue increased 37% during the first nine months of 2020 compared to a year earlier and operating losses were considerably narrower.

The year-on-year growth in Q4 could be even better considering the boost seen during Black Friday and Cyber Monday in late November. Shopify said it made record sales of over $5.1 billion during the two sales events in 2020, up a staggering 76% from its previous record of $2.9 billion in 2019.

Investors will also be eagerly watching what the mood is like in the early stages of 2021, but it is likely that Shopify will decide not to issue precise guidance due to the uncertain outlook. Shopify has warned that activity levels ‘depends on several external factors that are particularly fluid at present’, including unemployment, fiscal stimulus, and how long the pandemic ultimately lasts. All of these may impact how many companies seek to create online stores and the overall level of consumer spending on its sites. Over the longer-term, investors will want reassurance over Shopify’s growth trajectory once restrictions are eased and physical retail stores open up again, and whether it can retain the sales and sustain subscriber growth over the longer-term.

How to trade Shopify’s results

Shopify has smashed expectations at the both the top and bottom line during 2020, beating analyst forecasts during the first three quarters of 2020. This has resulted in Shopify shares rising by 5% to 7% on each day it released its quarterly results.

Over the long-term, brokers are bullish on Shopify and have a Buy rating on the stock (7 at Strong Buy, 9 at Buy, 16 at Hold, 1 at Sell and 1 at Strong Sell). However, Shopify shares have surged since the pandemic erupted last year and shares currently trade over 20% higher than the average target price of $1151.91, implying that the rally has been overdone.

Shopify has rallied firmly across 2020 with bulls notably gaining momentum from the beginning of this month.

The RSI has moved into overbought territory which should warrant caution, a period of consolidation or a pull back could be on the cards before further advances.

Immediate resistance sits at the at time high and round number of $1500.

Immediate support can be seen at $1290 January high prior to $1250 20 sma. It would take a drop below here to for more bears to climb in. 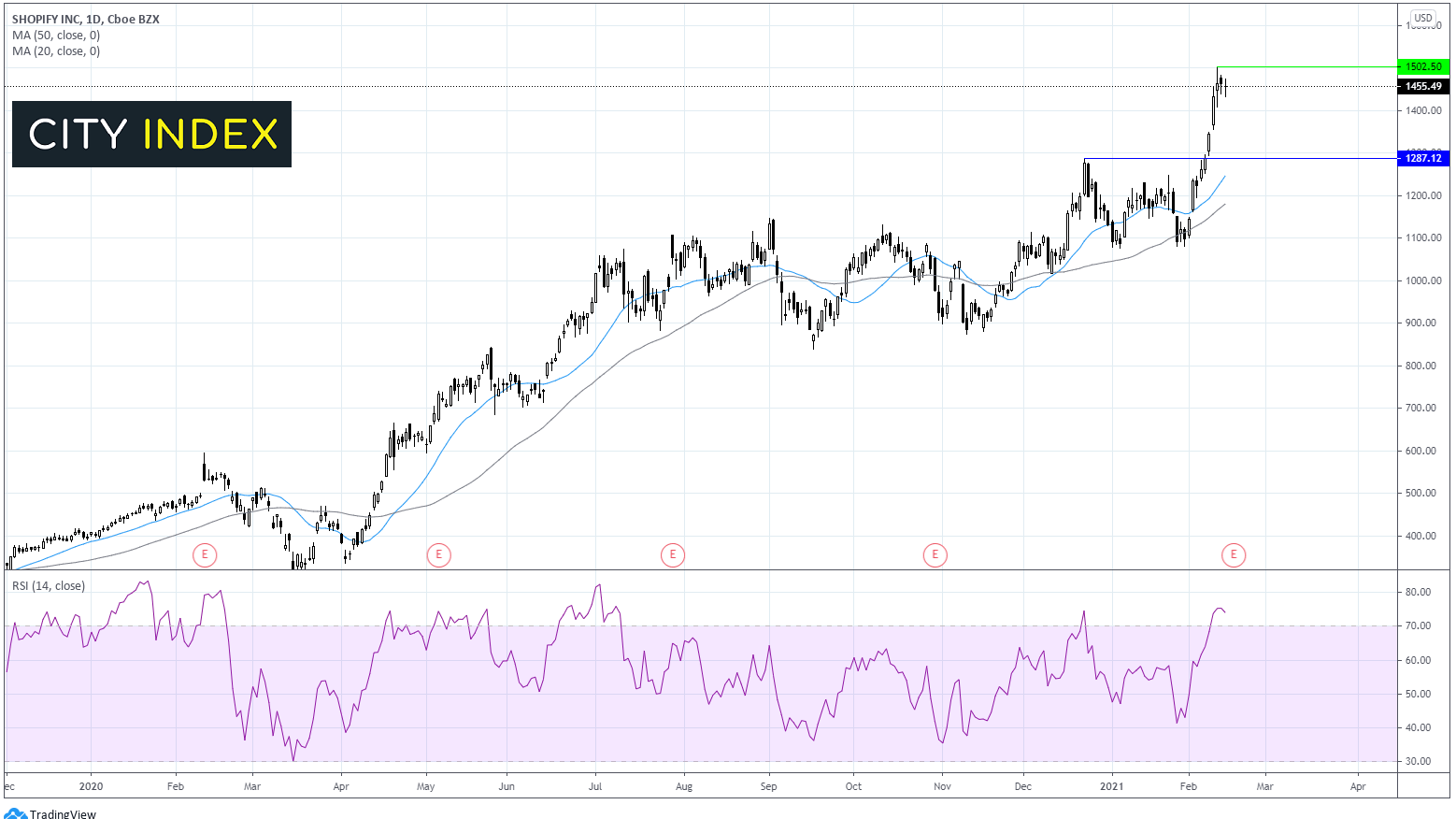 How to trade Shopify shares

You can trade Shopify shares with City Index using spread-bets or CFDs, with spreads from 0.1%.