It has been a bit of a horror show from the global PMIs today. We first saw European numbers come in well below expectations and later the US readings weren’t great either. Not that anyone should be surprised by these numbers but given everything that has been going on with inflation etc., you would think analysts would have expected more than just a moderate drop in the June PMIs. The fact that they have now turned out to be far worse than expected, and in line with the recent negative surprises in US data, the world’s largest economy is clearly starting to slow down and may even hit reverse in the coming months. Reflecting these worries, we have seen a sharp drop in bond yields today as investors expect central bank tightening to slowdown if the US and global economy fall into a deeper recession than they were previously expecting.

To be clear, the PMI numbers were not in the contraction territory of below 50.0, but the pace of the slowdown is alarming, nonetheless. Indeed, US manufacturing PMI was the weakest since June 2020, while service sector PMI hit a 5-month low:

Worrying, "business confidence slumped to one of the greatest extents seen since comparable data were available in 2012, down to the lowest since September 2020," noted S&P Global.  “The pace of US economic growth has slowed sharply in June, with deteriorating forward-looking indicators setting the scene for an economic contraction in the third quarter… Many services firms are now seeing households increasingly struggle with the rising cost of living, with producers of non-essential goods seeing a similar drop in orders."

So, this is the latest macro pointer to be in line with the shifting narrative. We are moving away from inflation worries and more towards growth concerns.

As a result, we should see weakness in crude oil and other commodities, as I noted earlier.

Earlier, we also saw very weak numbers from Eurozone PMI data, which was broad-based across countries and sectors. With data form both sides of the Atlantic (and China) pointing to weakening growth, and potentially a recession, European stocks have fallen heading into the close.

The DAX has been hit the hardest, down more than 1% at the time of writing. More losses could be on the way if the German index hols below the broken support at 12950 now: 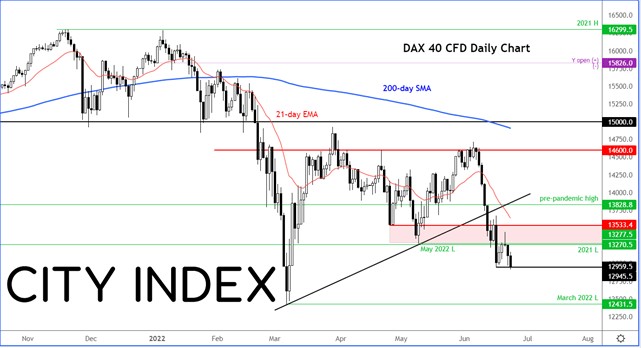 If it does, the next downside target would be the pool of liquidity resting beneath the March 2022 low at 12431.

You can trade with City Index by following these four easy steps:
1. Open an account, or log in if you’re already a customer
2. Search for the company you want to trade in our award-winning platform
3. Choose your position and size, and your stop and limit levels
4. Place the trade
Related tags: Trade Ideas PMI recession Inflation Stocks Commodities