After a big fall of around 5%, oil prices managed to regain some of their losses after Germany warned of Lehman-style contagion from Russian gas squeeze as it raised its gas emergency level to second-highest ‘alarm’ stage. Dutch gas futures, which is the European benchmark, rose 1.7% and this lifted the energy complex with it, including crude. Oil prices were also supported because of a small improvement in risk appetite during the first half of Thursday’s session, with equity indices bouncing sharply off their earlier lows, with bonds and cryptos also rebounding. But it remains to be seen whether the recovery will hold for oil – and risk assets in general – as fears over a recession continue to intensify.

This morning saw Eurozone PMIs come in all weaker-than-expected, suggesting that the economic growth slowed sharply. Surging inflation has clearly curbed the rebound from pandemic restrictions and factories continued to suffer from supply bottlenecks. A day earlier, comments by Federal Reserve Chair Jerome Powell had stoked fears about a global downturn.

The Eurozone Composite PMI dropped to a 16-month low in June, albeit still remained in the expansion territory. Rising price levels, concerns over energy and rising interest rates were among the reasons behind the weakness. Manufacturing output actually declined for the first time in two years. S&P Global economist Chris Williamson said that pent-up demand for services after pandemic was already fading and “offset by the cost-of-living shock and slumping business and consumer confidence.” The euro dropped to $1.05 handle following the publication of the data.

A sharp slowdown in the global economy is now inevitable with China – a major importer of commodities – being a major source for concern. Unlike the rest of the world, China, the world’s second largest economy, has been unable to put coronavirus behind it. As a result, it has been going into repeated lockdowns, which has had ramifications in all areas of its economy, not least the property market. This is reducing demand for metals such as copper and iron, used in the construction industry.

Globally, consumers’ disposable incomes have fallen sharply because of the big rise in inflation, hurting some emerging markets particularly badly. It is possible that the slowdown will be more severe than expected, and that’s what investors are worried about the most. If you look at recent price action across asset classes – from stocks to cryptos – they are all pointing to the same thing. 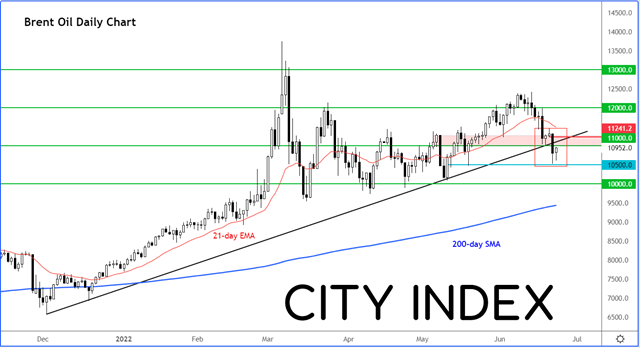 With the long-term trend line broken, the path of least resistance is now to the downside. I would expect any rallies back into the $110-$112 region to be faded into going forward. The next downside target is at $105, followed by the $100 round figure.

2. Search for the company you want to trade in our award-winning platform
3. Choose your position and size, and your stop and limit levels
4. Place the trade