‘No signs of recession’ according to the ifo report (EUR/JPY, EUR/NZD)

The German ifo business sentiment survey rose faster than expected in May. The Business climate rose for a second consecutive month by 1.1 ppts to 93, expectations rose slightly to 86.9 and current conditions rose to a 7-month high of 99.5 (up 2.2 ppts, its fastest rate since the invasion of Ukraine). 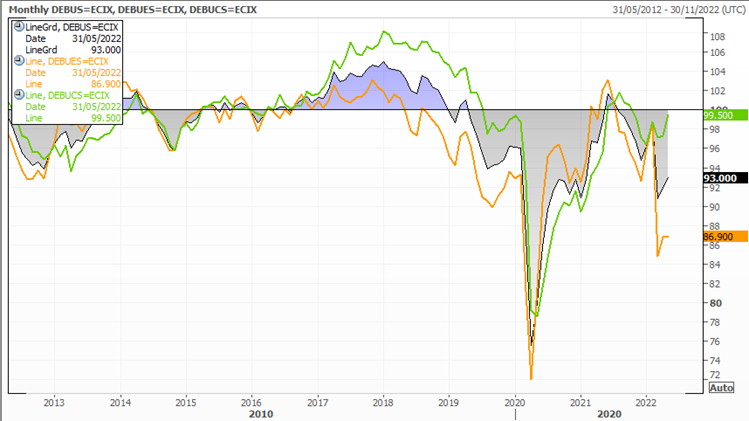 Summary of the ifo Report in May

It’s all coming together for hike/s from the ECB

One of the sub-indices from the IFO reports includes the probability of economic expansion in Germany. And it has risen from a 1.2% low in March to 55.2% in May – meaning economic expansion is now slightly more probable despite ongoing concerns over inflation and war. 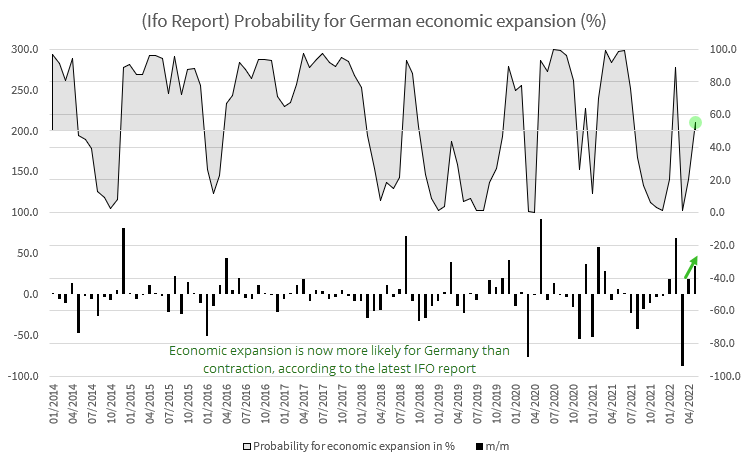 Traders also reacted to hawkish comments from Christine Lagarde’s comments presented on the ECB’s website over the weekend. In the article she suggested that the ECB will ‘likely’ be ready to exit negative rates by the end of Q3 (September). And if inflation stabilises above 2% over the medium-term, further hikes may be required. And whilst the current situation is complicated by negative supply shocks, the ‘disinflationary dynamics of the past decade are unlikely to return’. Furthermore, rates may be lifted as soon as July and there are “clearly conditions which gradualism [small hikes] would not be appropriate”.

EUR/JPY looks set for a breakout

EUR/JPY recently saw a false break of a head and shoulders pattern. And such failed patterns can sometimes indicate a reversal. The 132.66 low stopped just shy of the 50% retracement level, and momentum has since turned higher to suggests the completion of an ABC retracement. A higher low has formed around 134 and prices are now testing trend resistance.

Given the BOJ’s (well broadcast) desire for a weaker yen and the shift from the ECB, we expect EUR/JPY to performed well during periods of risk-on. Our bias remains bullish above 134 and for an initial move to the 138.30 and 140 high. But if this is part of an impulsive move then the next target becomes the June 2015 high around 141 and 61.8% projection around 142.

EUR/NZD may have printed a corrective low around 1.6400 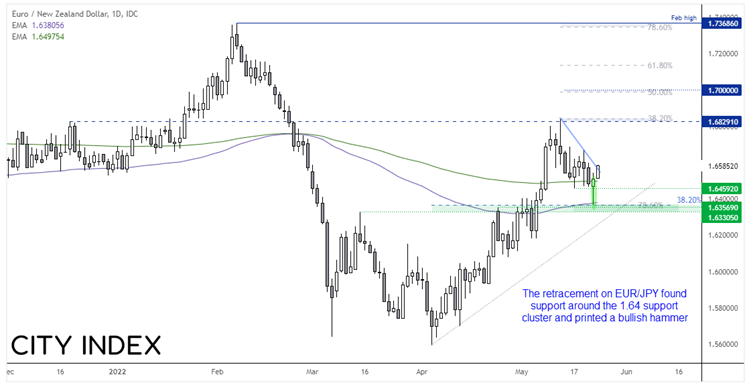 Another cross in focus is EUR/NZD ahead of Thursday’s RBNZ meeting. Markets are expecting a 50-bps hike (from 1.5% to 2%) yet the Kiwi dollar continues to face selling pressure as there are concerns that they could enter a recession as they struggle to reign in inflation. I suspect EUR/NZD has now seen a corrective low.

A bullish hammer formed yesterday which respected the 100-day eMA, 38.2% and 78.6% retracement level and the 1.6400 handle as support. It closed above the 200-day eMA and prices have moved higher today following weak (negative) quarterly retail sales in NZ, and prices are now probing its retracement line.