How to find oversold stocks: meaning, indicators and examples

An oversold stock means that a company’s shares are currently under heavy selling pressure but have the potential to bounce back. While the sell-off has caused its share price to decrease dramatically, the new lower price does not reflect the asset’s true value so it’s likely a price rally will follow.

The meaning of oversold can have different meanings depending on whether you’re using technical or fundamental analysis. Both styles of analysis are extremely common, but it’s important to understand the meaning being assigned to the term.

For technical traders, an oversold stock is one that has reached a predetermined level on a technical indicator. These indicators don’t take the actual value of a stock – its fundamentals – into account, but only focus on price action and historical data.

For those who use fundamental analysis, an oversold stock means that it is trading below its intrinsic value. Oversold conditions are usually as a result of a trigger incident – such as a poor earnings report or negative news announcement – that causes a sell off, or following a large buyer closing their position.

How to tell if a stock is oversold

Your method of identifying whether a stock is oversold or not will depend on whether you’re using technical or fundamental analysis – or a combination of the two.

The most common technical indicators for identifying oversold stocks are the relative strength index (RSI) and stochastic oscillator. But you can also use fundamental analysis to ascertain whether a stock is trading below its previous value in terms of the price to earnings (P/E) ratio.

Finding oversold stocks with the RSI

The relative strength index measures the power or momentum behind a price move over a specific period of time – normally 14 days. The RSI is an oscillator, shown as a line graph that moves between 0 and 100. An RSI reading of 30 or below is taken as a signal that the market is oversold and will rebound, while a reading of above 70 is an overbought signal.

It’s important to note that the RSI can stay in the oversold territory for a while during a downtrend and isn’t necessarily an immediate indicator that the market is going to turn.

Once the RSI has crossed back above the 30% line, it’s taken as a bullish signal that the upward trend is gaining momentum. But it’s important to keep monitoring the indicator for any dips back toward oversold territory.

On the chart below, we’ve circled where the RSI dropped below 30 and then moved back above it. These would be possible buy points. 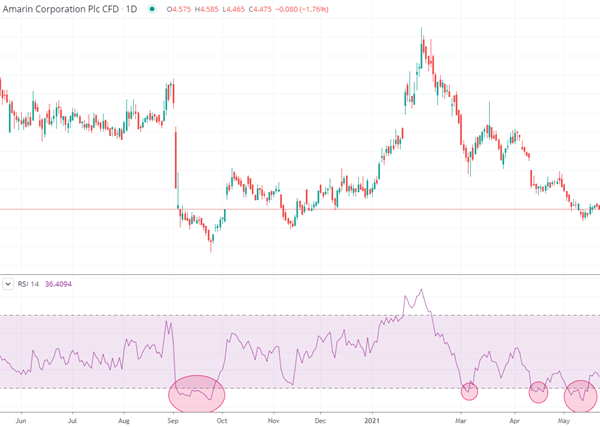 The stochastic oscillator is also a momentum indicator, which compares the most recent closing price of a stock to its prices over a certain timeframe. Just like the RSI, it’s presented on a range between 0 to 100 but readings under 20 are considered oversold, while readings over 80 are considered overbought. 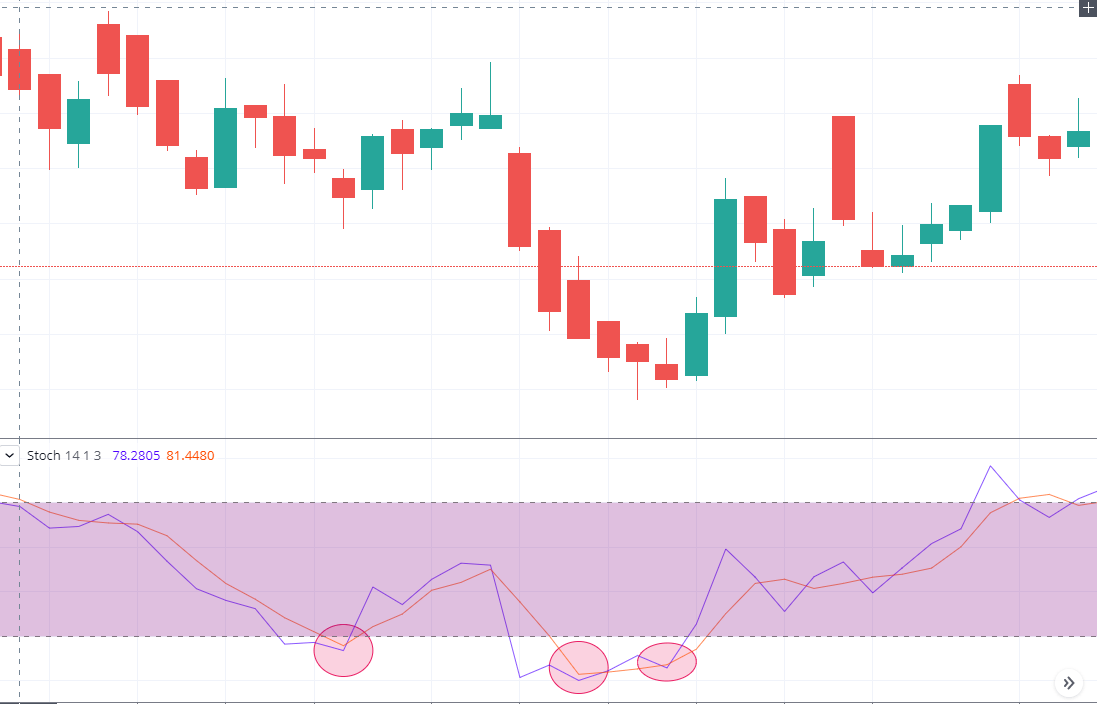 You’ll see two lines on the stochastic: one that is the oscillators current value, and another that is its three-day moving average. When the two lines meet is the signal for a reversal.

Finding oversold stocks with the price to earnings (P/E) ratio

The P/E ratio is publicly reported in a company’s financial results or earnings. It’s used to identify the most accurate value for a particular stock by measuring its current share price relative to its earnings per share (EPS).

The P/E ratio can be used to compare the current value of a stock to its true value or historical values, but it can also be used to judge the value of a share against an industry benchmark, such as a stock index.

Say Company XYZ had recently released earnings, showing it had made a profit of $10 billion for the year. As the company has 5 billion shares outstanding, this gives it an earnings per share of $2.

However, if we look at the company’s historic earnings – which were 15x and 10 x, we can see that Company XYZ has a low P/E ratio. And we get the same impression when we compare it to the average P/E ratio for an S&P 500 company, which is between 13 and 15x.

P/E ratio isn’t necessarily a great indicator of whether a stock is oversold, as all it tells us is how much above a company’s earnings an investor is willing to pay for a share of the business. But when you assess the company’s future outlook and earnings potential, P/E can provide an indication of where the company can go from its current position.

Is it good to buy oversold stocks?

Buying oversold stocks can provide the opportunity to pay a relatively cheap price for a company’s shares that still have a positive outlook. However, there’s usually a reason that the share price declined, so its important to do your research and find out exactly why previous buyers have decided to close out their positions.

Not all sharp declines in a share price will take it into oversold conditions. The term only applies to shares that have dropped in value but the outlook for the business is still solid. If there’s a good reason behind the fall in price, it’s usually referred to as a stock market correction rather than oversold. This can happen when the company’s shares have previously been overbought, leading to a bubble.

How to buy stocks with City Index

You can trade stocks with City Index with spreads from 0.1%. Follow these easy steps to start trading with us: