The March FOMC meeting was highly anticipated.  Bonds yields around the world were rising, as were inflation expectations.  However, Fed Chairman Jerome Powell had indicated at the meeting that the rise in yields was due to confidence in the US recovery and that the Fed is not going to hike rates until the labor force has fully recovered and inflation is sustainably above 2%, which they don’t expect until 2023.  They want to see hard data, not forecasts.

Fast forward to April’s upcoming meeting on April 27th-28th.  Non-Farm Payroll data was hot in March, with the economy added 916,000 jobs to the economy. However, one data point does not equal a trend.  In addition, Initial employment claims are also at their lowest levels since the pandemic began over a year ago. However, there are still roughly 8 million jobs that have not been recovered since the onset of the coronavirus.

The rise in yields heading into the March meeting has plateaued and are no longer screaming higher.  The benchmark 10-year yield is trading near 1.57%, vs a March 31st high of 1.774%.  Inflation was not a concern at the March meeting and Powell has noted that they will let inflation run hot while the Fed focuses on maximizing employment.  Given that statement, inflation and bond yields shouldn’t be a factor at this meeting.

Retail sales were much higher than expected in March (increased demand).  Recent PMI data has shown that the recovery in manufacturing, and now services, are strong. However, there are supply concerns due to the coronavirus (decreased supply).  The net result should be higher prices, and thus higher inflation down the road, however the Fed is waiting for that HARD DATA before making a call.

Before the March meeting, Congress passed Joe Biden’s $1.9 trillion stimulus package.  Since then, Joe Biden announced his $2 trillion infrastructure package.  On Thursday, it was released that he is seeking a near doubling of capital gains tax for the wealthy from 20% to near 40%.  As these proposals are still in their infancy, the FOMC may want to see how these plans unfold over the coming months before they make a decision to reduce accommodation.

In the US, the coronavirus is increasing in some states, while decreasing in others.  The vaccine distribution is still strong, despite the pause in the Johnson and Johnson vaccine.  However, the Fed noted in March that there are still risks that cases consistently rise again due to mutations.  That is unlikely to have changed since the last meeting.

Expectations are for the FOMC to continue to sing their same tune. Without staff projections at this meeting (no dot plots), the most likely outcome will be Wait and see.  While the committee may note the pickup in the recovery, they will most likely continue to emphasis the need for a complete labor recovery and to see inflation sustainably above 2%.  Fed Chairman has said they will advise the markets well in advance of tapering the $120 billion in asset purchases each month.  This may not the meeting for this announcement.

Heading into the March FOMC meeting, the US Dollar Index had paused its rise as traders waited the results of the meeting.  On the day of the meeting, the DXY moved lower, only to resume its strong uptrend into the end of the month and quarter.  The DXY peaked on March 31st and has pulled back to the 61.8% Fibonacci retracement level from the February 25th lows to the March 31st highs, near 91.13.  As with the March meeting, price seems to have paused ahead of the meeting.  Any hints of tapering may send the DXY higher, while a discussion of “lower for longer” could cause the greenback to resume its move lower. 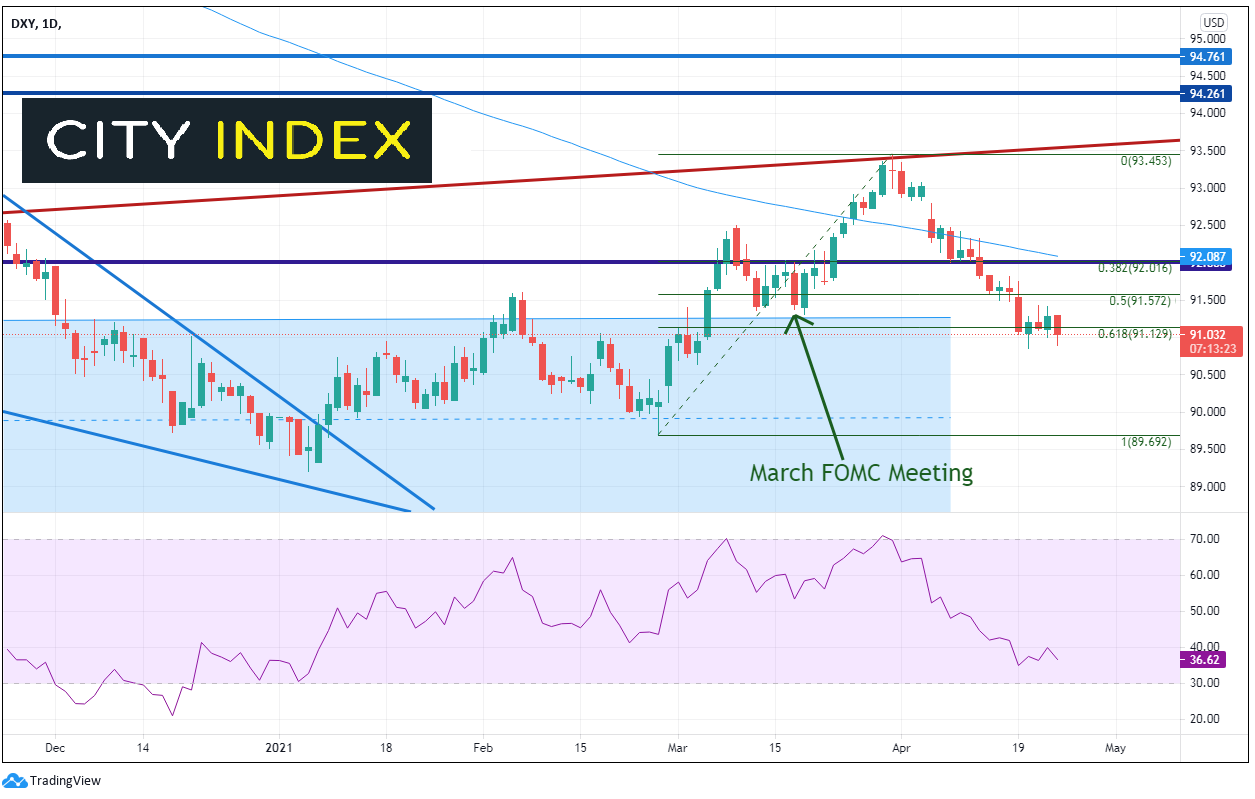