EUR/USD may bottom out soon

…the key question is: will there be a more pronounced breakdown of parity first, before it bottoms out?

Calling the low on the EUR/USD has not been fun for anyone that has attempted it. Luckily, we have been consistently bearish on the world’s most heavily traded currency pair. But at these levels, even we have to at least entertain the idea of a potential bottom.

So, how likely is it that we will see a low form around parity on the EUR/USD exchange rate?

There is no short answer, but there are good reasons why a bottom for the EUR/USD might be near, if we haven’t already seen it.

Firstly, there is the argument that the single currency might have gotten too cheap.

Remember, the euro was last this weak in 2002. Not even the height of the pandemic in 2020 or the European debt crisis in 2012 saw it trade this low.

This time, we are talking about stagflation and a sharp divergence between US and Eurozone monetary policies. So, there is good reason why the EUR/USD is where it is this time around.

But unless this economic downturn turns into a prolonged recession or a depression, then it is possible that the market is underestimating the single currency’s value.

US recession risks not priced in for USD

We are likely to be in a recession already in Europe, hence the weakness in the single currency and equity markets. But the US could follow suit with all these aggressive rate hikes and surging inflationary pressures weighing on consumer sentiment and spending. The slowdown around the world may very well push the world’s largest economy into a recession.

As we saw on Wednesday, US CPI was much hotter than expected at 9.1% which boosted speculation that the Fed will put the pedal to the metal and deliver a 100-basis point rate hike instead of 75 at its next meeting. That only raises worries over an economic slowdown. The Fed front-loading interest rate hikes only helps bring forward rate-cutting cycle. The markets think this could happen as early as Q1.

But could EUR/USD fall below parity before we see a bottom?

That was my base case scenario, and we already did see the euro print sub-1.000 on Wednesday, before recovering more than 100 pips. Was that it, or will it dip below parity again, and this time more decisively…. leading to a capitulation and an eventual bottom?

This scenario cannot be ruled out just yet. Remember, it was only a couple of days ago when the market fully priced in 75bp hike in July. The CPI overshoot and BoC’s larger hike of 1% raised the bar and investors started to bet that the Fed will now also hike by 1% instead of 0.75% in two weeks’ time. The OIS market was pricing in 90bp hike for July by Thursday morning, when this report was written.

From my observation of big round handles and after extensive drops, I reckon there will be a lot of speculators looking for a EUR/USD bounce around parity. On Wednesday, we got a bounce of 100 pips before rates have dropped back to 1.2020 at the time of writing. 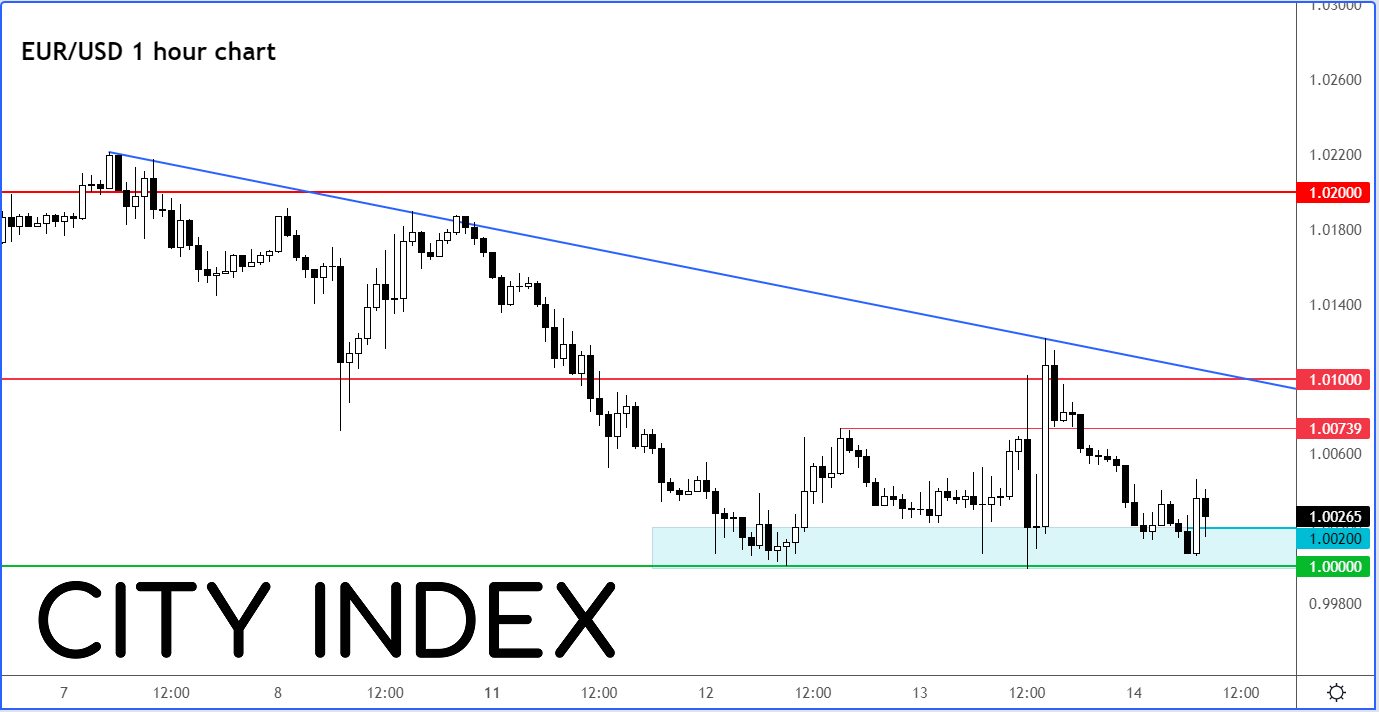 I am expecting to see further such rebounds as speculators either take profit on their shorts, or opportunistic bullish traders look for “one-shot-one-kill” types of bounce trades every time we get close to parity. Whether or not we will see a larger bounce than the day before remains to be seen.

“I want to go long around current levels with a stop not too far below parity to get a good reward-to-risk profile. If it works, great, if not then well it was a calculated risk. Maybe I would start with a small position to test the waters and then, later on, if we see more signs that it wants to bottom out, add to that position so then I have a full 1R risk.”

The ongoing re-pricing higher in Fed rate expectations is likely to keep the dollar supported, and may lead to another break below parity in the coming days. Even so, for the reasons stated above, I think that we are very close to reaching a low on the EUR/USD. Whether parity breaks again or not, I think that the downside risks are limited for the euro going forward.