EUR/USD falls below parity. What now?

The seemingly never-ending question of “Will EUR/USD break parity?” has finally been answered.  Although EUR/USD fell a couple pips below parity earlier in the week, on Thursday, the pair crashed through 1.0000, making an intraday low of 0.9952. After that, the pair bounced back to 1.0025 and has been oscillating around the big figure since.  What could happen now? 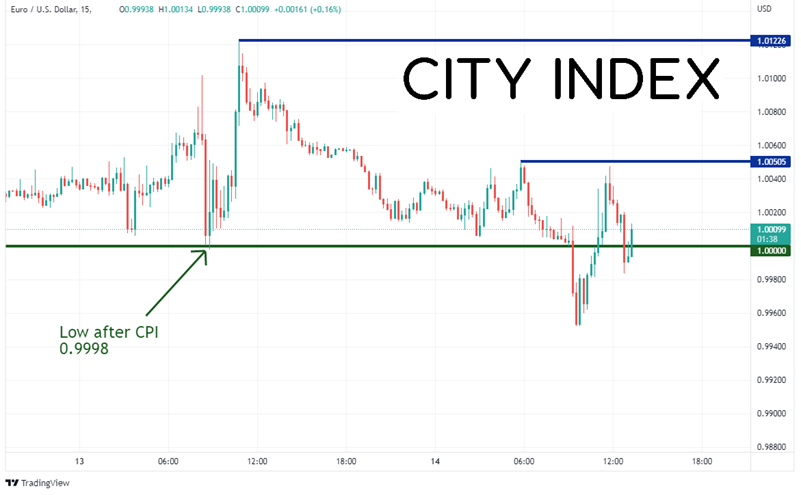 Sure, the Eurozone has it’s share of problems, which perhaps the least of which is that there is a war in neighboring Ukraine.  This has helped to drive inflation to a record high level of 8.6% YoY.  Yet, while much of the world has been raising rates to try and prevent inflation from becoming entrenched, the ECB hasn’t lifted rates a single basis point, leaving rates at an ultra-low -0.5%. Compare this to the Fed, which has raised rates to 1.75% and is discussing whether it should raise rates by 75bps or 100bps at its next meeting! The US June CPI reading was 9.1% YoY.  To be fair, the ECB did say that it will increase interest rates by 25bps at its July meeting. A 50bps rate hike also seems to be on the table, however, that would bring rates to 0% at best.  This increasing gap between interest rates has been pushing EUR/USD lower.

In addition, the latest manufacturing data suggests that the Eurozone is heading towards slower growth, as did Germany’s ZEW economic sentiment.  However, the US appears to be heading in the same direction, with the latest US ISM Manufacturing PMI coming in at 53 vs 56.1 in May.  It was the worse print for the economic data point since June 2020, just months after the pandemic hit.  The difference between the 2 areas is how each central bank will handle a recession.  The US can cut rates if need be, as the Fed may have rates at 3% (or more) should it need to act.  However, the Eurozone may not have that luxury, unless it starts raising rates soon, and quickly.

The ECB must also deal with fragmentation risk between each country’s economy within the Eurozone.  Fragmentation risk is the possibility that some peripheral and debt-laden Eurozone countries might experience a significant rise in their bond yields relative to a benchmark, such as German 10-year bunds. The ECB held an emergency meeting to discuss how it would control interest rates if the peripherals began to rise.  The result was in “anti-fragmentation” tool, in which the central bank would use maturing proceeds from its bond holdings to purchase new bonds in countries that have higher yields.  If used, will this tool help or hinder the Euro? More to come at the ECB meeting next week.

And just today we learned that the leader of the most indebted country in the Eurozone, Italy, is offering his resignation.  Mario Draghi, who as President of the ECB declared that he would do “whatever it takes” to keep help stabilize the Euro during 2012, has said that he is resigning from the PM position.  However, the latest news is that the President of Italy has rejected his resignation.  Pay attention to this fluid situation as the next PM will have to determine how to handle the country’s debt problem.

Will EUR/USD head lower? Or will this prove to be a false breakdown below parity?  From a technical standpoint, parity, or 1.0000 is just another number.  However, it has been acting as a psychological round number support level for the past few days.  Now that the pair has traded below it, there is no technical reason that it should stop there. On a daily timeframe, the EUR/USD has fallen below parity and below the bottom downward sloping channel of the falling channel that the pair has been in since early February.  If price continues to move lower, the next support level isn’t until the lows of December 2002 at 0.9859.  Below there, the pair can fall to 0.9595, which is horizontal support dating to January 2001.However, notice that EUR/USD has closed back above parity, creating a hammer candlestick, which is a reversal signal.  In addition, notice that the RSI is in oversold territory.  First resistance is at yesterday’s high of 1.0122.  Above there, the pair can run to previous support (now acting as resistance) at 1.0340 and then the top, downward sloping trendline of the channel near 1.0525. 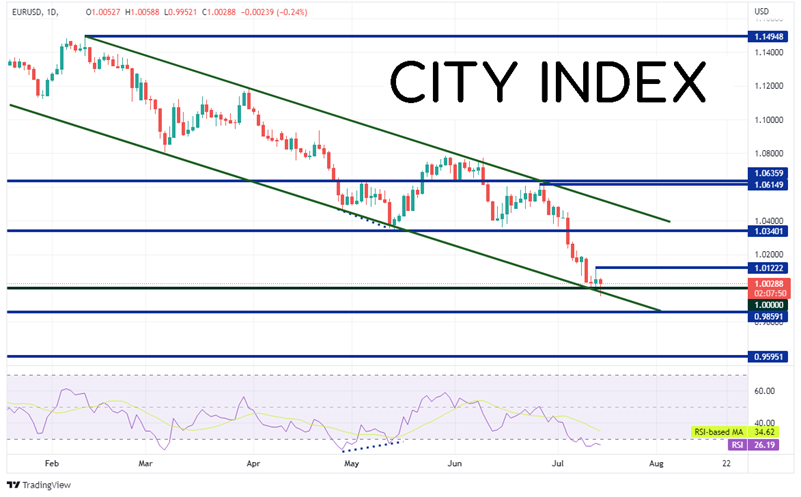 The ECB meets next week at its July interest rate decision meeting.  The Committee has already said that it will hike rates by 25bps. 50bps is up for discussion. The FOMC meets the week after that. The decision for the Committee seems to be whether it will hike 75bps or 100bps.  The next directional move may depend on the outcome of these meetings.  Until something changes, “the trend is your friend”!