EUR/USD drops to weakest since 2002

Risk has been off the menu this week with stocks barely finding any love, while copper, crude and crypto have all fallen. In FX, the euro, Aussie and other risk-sensitive currencies have dropped as the rampant dollar continues to surge higher. The EUR/USD has dropped below the 1.02 handle for the first time in 2 decades.

Why is the euro falling?

It is not a secret that the Eurozone economy is not doing great, with the outlook also looking bleaker by the day. The fact that the EUR/USD is trading at its lowest levels since 2022, reflects this miserable macro outlook. The weakness is driven by rampant inflation, concerns over energy and rising borrowing costs. We have seen consumer, business and investor sentiment all take big hits, with PMIs also falling. Ongoing tensions between Europe and Russia over natural gas supplies means business sentiment in Germany in particular is unlikely to improve any time soon. This should keep the manufacturing sector under pressure. At the same time, the European Central Bank’s determination to fight inflation with rising interest rates will continue. This will come at a cost, but they have no other choice. It is a vicious circle.

The threats of dwindling economic growth and stubborn inflation should keep risk assets undermined. This is precisely why German investor sentiment is at a new record low. That’s what the latest Sentix survey revealed on Monday. There was more bad news from Germany. The Eurozone’s largest economy reported its first monthly trade deficit in three decades. Surging prices of imports obviously had the biggest impact, with energy, food and parts used by manufacturers rising by more than 30% in May compared to a year ago. But it also points to weak demand from abroad, which is hardly a surprise given how much the economic outlook has deteriorated in recent months.

US dollar King of FX

On the other side of the equation, the US dollar continues to rise against all major and minor currencies. It has reached its highest point since 2002 against a basket of foreign currencies, driven by weakness in the EUR/USD which, as mentioned, has dropped to its lowest since… yes, 2002.

It looks like the market is confident that the Fed tightening cycle will probably withstand recession more robustly than some other regions of the world, not least Europe. We will likely see further strength in USD until something changes fundamentally. Will the release of FOMC minutes or US non-farm payrolls report trigger a sharp slump in EUR/USD to parity this week?

Will the EUR/USD hit parity?

At the time of writing, the EUR/USD was less than 200 pips shy of dropping to parity.

The path of least resistance is clearly to the downside and we could soon be talking about 1.01 handle. Something must change fundamentally to turn the tide. Any recoveries we get in the interim will be driven by short-covering mainly. Key resistance is now the base of this week's earlier breakout and former support around 1.0350 area. Additional resistance is seen around 1.0235. 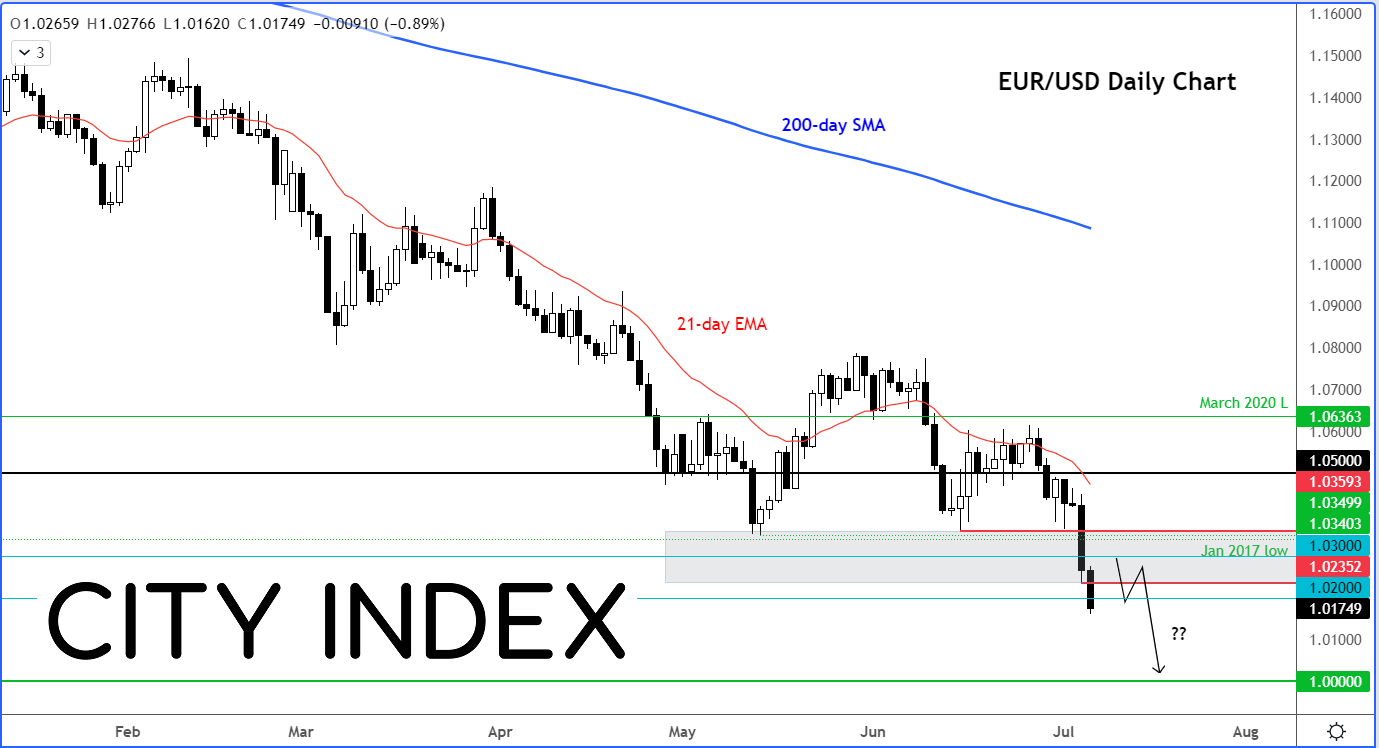 Looking ahead to the rest of the week

Looking ahead, the focus will turn to the US as we go deeper into the first full week of July and third quarter. On Wednesday afternoon, the FOMC’s last meeting minutes will be in sharp focus as investors try and figure out exactly how hawkish each member is and how do they see interest rates evolving in the months ahead. Then, on Friday, the US monthly nonfarm jobs report will put the dollar and gold into focus. The NFP is becoming less and less relevant for the markets as the focus has turned to inflation and economic growth than employment. Thus, the only thing that will matter from the jobs report is the wages bit. Workers will be demanding higher pay to keep up with inflation. Watch average earnings for upside surprises.