European Open: Quiet trading in anticipation of a big week 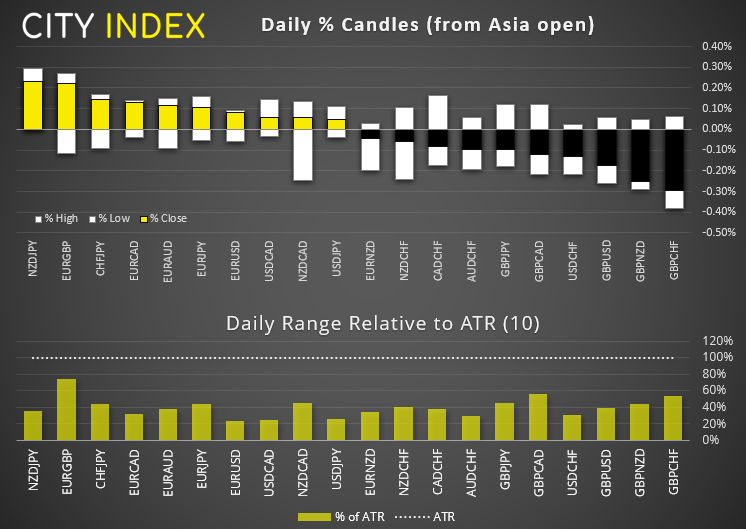 
Indices: European bourses wobble at their highs on vaccine halt

European shares were lower yesterday as Germany halted their use of the AstraZeneca vaccines, on reports it caused blood clots in some patients. The DAX printed a bearish outside candle, although with sentiment remaining buoyant and futures ticking higher, perhaps it can remain above its 10-day eMA. Still, having closed to a record high recently after breaking out of a multi-week resistance level, we’d be happy to see the DAX retrace towards 14,200 support – as this level could tempt bulls to return to the table.

The CAC could also do with a retracement as it appears overextended above its 10-day eMA. And yesterday’s bearish outside day above 6,000 suggests it could be ready. But as with the DAX, the trends still point higher from here.

As for the FTSE 100, price action remains choppy as ever. Yesterday’s Doji with a longer upper wick kissed 6,800 momentarily before falling back below the days’ open. With such fickle price action on the daily chart, it perhaps is better suited to intraday traders, if it must be traded at all.

The Reserve Bank of Australia (RBA) released the minutes of their March cash rate meeting. They reiterated that negative interest rates are “extraordinarily unlikely” and that rising bond yields can be attributed to optimism of the economic recovery. They will ignore transitory spikes in inflation and do not expect to hit their employment and inflation targets until 2024 at the earliest. With that said, RBA aren’t exactly known for moving first with policy these days and their outlook generally mirrors the Fed. So it will be interesting to see if the RBA take a more ambitious tone if or when the Fed upgrade their own outlooks.

The US dollar was little changed overnight, although trades slightly lower and in the top half of Monday’s bullish range. The British pound was the weakest major overnight and the euro was the strongest, yet ranges were small again ahead of Wednesday’s FOMC meeting. Most forex majors and crosses we track remained below 50% of their 10-day ATR’s (average true ranges).

Learn how to trade Forex

The gains for oil markets this year have not gone unnoticed. Fundamentals and the technical landscape have aligned for a great run for Brent to hit $70, but perhaps now it is time for a good old fashioned retracement. Take note that we are not calling for Armageddon type bear-market type, but a simple movement against its trend.

One observation from the daily chart (not pictured) is that volatility has increased leading into the highs of $70. This shows the dynamic of the trend has changed and could perhaps be signs of distribution at the highs (before it really does turn lower).

We saw a small bearish pinbar on Friday followed by a bearish engulfing candle yesterday which rolled over after touching $70. So we are now looking to position ourselves on an intraday timeframe as we anticipate further weakness. 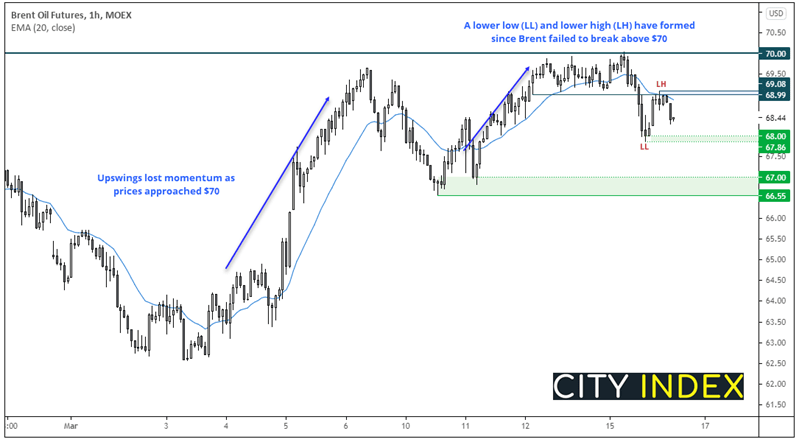 Switching to the four-hour chart shows a prominent lower low and lower high have formed below $70. After retracing to around $69, bearish momentum has returned overnight to show supply at this key level.

WTI trades around $64.50 after falling to $64 yesterday. Yesterday’s volatile Doji suggests WTI requires caution, as the intraday price action appears to be more ambiguous than brent’s.

Gold prices are testing yesterday’s highs around 1734.50, but we’d like to see a break above 1740 resistance sooner than later, otherwise we risk another cycle lower. And this is perfectly plausible given the tight ranges seen for the dollar. Still, a break above 1740 brings our 1760 bullish target into clear view. 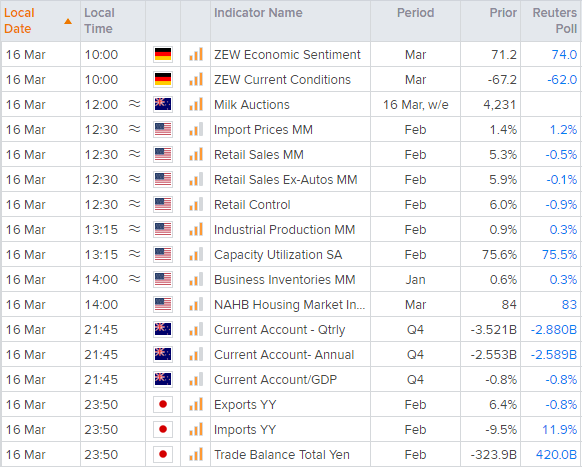 Germany’s ZEW economic index is the main calendar event in the European session. It beat expectations in February due to high expectations for a retail spending spree that never materialised (retail sales fell -0.45% in January and -8.7% YoY). Sentiment was already lower for European equities yesterday due to reports of Germany (among others) halting the AstraZeneca vaccine, so we suspect euro forex pairs and bourses may be sensitive to a weak print today, if that materialises.

Retail sales in the US are expected to rise 5.3% and feed further into the economic rebound / higher inflation narrative, even if they fall slightly short of expectations. We’d therefor expect that narrative to become amplified if retail sales beats the consensus, and provide further support the Down Jones, S&P 500 and Russell 2000, which are already at record highs.