EUR/JPY faces key test ahead of BoJ and EZ CPI

When you are left with the bad and the worse, you get the EUR/JPY. Only, the JPY is now the bad while the EUR is the worse. But with the Bank of Japan meeting coming up on Thursday, there is a risk the sell-off in the yen could come to an abrupt end, should the BoJ decide to tackle the rapid decline in the currency. This could trigger a sharp sell-off in the EUR/JPY, which has in fact provided some tentative signs of topping out.

The slump in the yen has made everything that Japan imports, more expensive. The markets remain convinced the BoJ will keep its main monetary settings unchanged. But in light of the currency’s rapid depreciation, there is some speculation about a possible adjustment to policy or forward guidance towards a tightening direction.

If that’s the case, we could well see at least some modest recovery in the yen.

There is also the possibility the yen could find haven flows amid the ongoing volatility in the stock markets. So far, the slump in the markets has failed to ignite a big rally in the JPY, but some yen pairs like the EUR/JPY, EUR/JPY and AUD/JPY have started to weaken. The USD/JPY hasn’t moved move though as the greenback continues to rally across the board.

Meanwhile, in Europe, Russia’s war in Ukraine continues to unnerve investors. There is a possibility that other countries could be hit next if the refuse to buy Russian gas supplies in rubles. These fears have been evidenced, for example, in the EUR/USD touching its weakest level since 2017 and the spread between the Italian and German 10-year widening by the most since June 2020. Incoming European macro data has not been great either. Today saw the German Gfk Consumer Climate print -26.5 when -16.1 was expected. German CPI is due on Wednesday, while the Eurozone CPI estimate will be published a day later on Friday.

From a technical perspective, it is possible that a top may have already been hit on the EUR/JPY after its failure to hold above the 2018 high and former resistance at 137.50ish. Today, it was attempting to hold below 136.50, a level which was previously support. 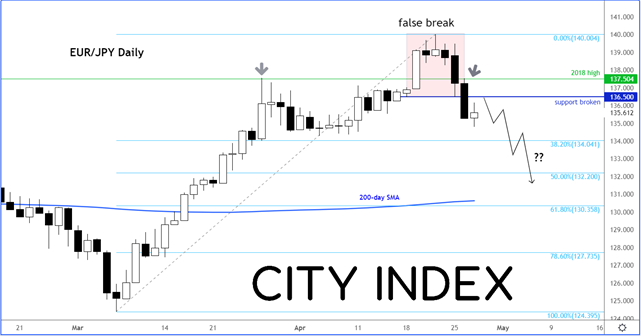 So, there are some tentative signs of a top, but more price action is needed to confirm a full-on bearish reversal. Still, an eventual drop towards the 200-day average looks likely, especially if the BoJ does not refuse to deal with the yen’s ongoing weakness.