There have been number of ECB officials on the wires lately discussing the possibility of raising interest rates sooner rather than later, including ECB President Christine Lagarde. As a reminder, April’s Euro Zone inflation report was 7.5%.  The ECB targets 2% inflation.  Central bank members had previously been cautious to raise rates as they were concerned about the effects of how the Russia/Ukraine war would impact household income. It seems now that with inflation as high as it is, the Committee doesn’t have much of a choice.

Last week, the ECB’s Schnabel said that the ECB will gradually move its key interest rate into positive territory over time through a sequence of rate hikes.  Today, she followed those remarks with additional hawkish comments, noting that high inflation is becoming entrenched.  Also last week, the ECB’s Villeroy said that interest rates may be raised back above 0.00 by the end of the year (the deposit rate is currently -0.50) and that signs of inflation expectations are less anchored.  He followed those remarks yesterday by commenting that the ECB must normalize as core inflation strengthens.  And just today, ECB President Christine Lagarde said that the Asset Purchase Program should wind down in the beginning of Q3 and that a rate hike could come just “a few weeks” later.

Although EUR/USD hasn’t necessarily gone bid on the recent ECB comments, it has managed to stop the carnage the pair had been in since March 31st.  At the time, the pair had been trading at its 200 Day Moving Average near 1.1185.  By the end of April EUR/USD had fallen to a low of 1.0471 as the RSI moved into oversold territory, an indication that the pair may have been ready for a bounce. 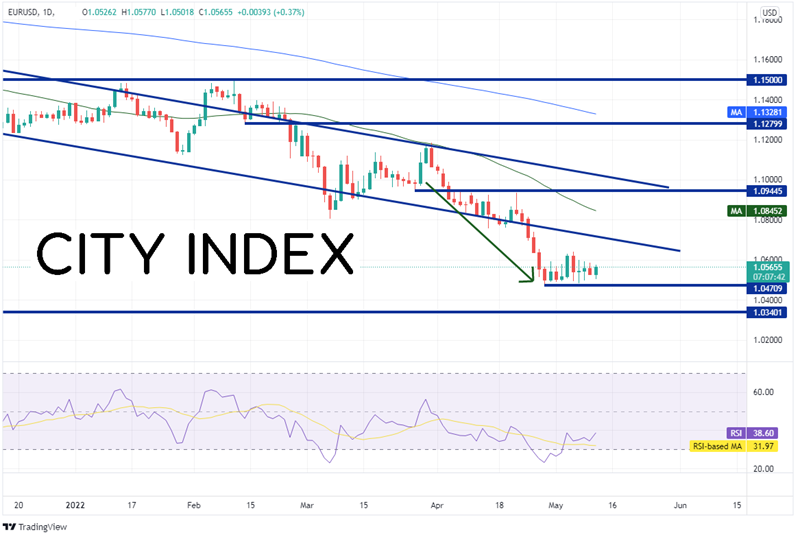 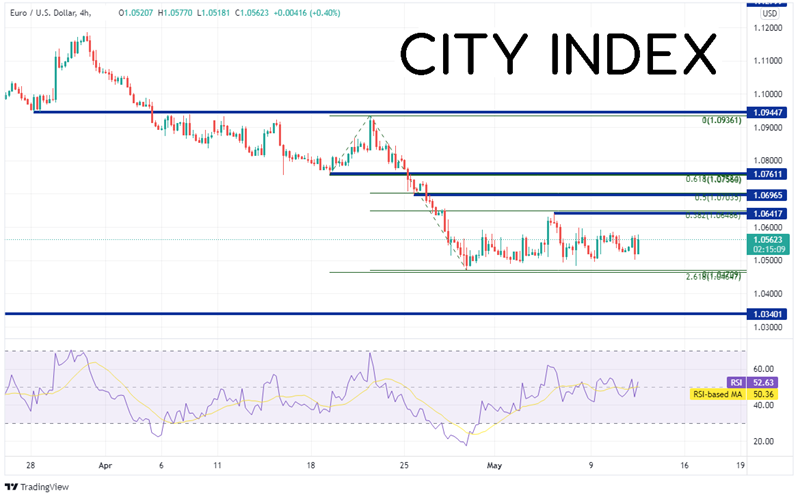 The US CPI released earlier today was stronger than expected at 8.3%, but not as high as March’s reading of 8.5%. Could US inflation have peaked?  Watch for more comments from ECB members ahead of their meeting on June 9th to find out if they continue to hint at the timing to begin hiking rates in Europe.  Hints of rate hikes in Europe could give EUR/USD a lift.