Dollar index clings onto bull trend ahead of CPI

The US dollar has managed to extend its gains after rebounding across the board on Wednesday, ahead of the publication of US consumer inflation data at 13:30 GMT. The CPI report has the potential to set the market direction over the coming weeks ahead of the FOMC in December.

While a small beat or miss will undoubtedly move the dollar accordingly, what’s important is at above 8%, CPI is way too high for the Fed to ease off the gas. So, even if we see print below the 8% year-over-year figure for October, which would represent another downward move from the 8.3% recorded in September, this will not necessarily cause a big dent in the dollar’s bullish trend.

Inflation hit a multi-decade high of 9.1% at the end of the summer, before falling steadily in recent months. With everyone expecting it to have moderated further, the bigger reaction would be if we see an overshoot. That would probably send the dollar soaring, and stocks tumbling.

It is worth paying closer attention to the core inflation reading, because that rose to a 4-decade high of 6.6% in September. Another acceleration in core CPI could result in heightened volatility across the board, especially as analysts expect it to have ticked lower to 6.5% in October.

We have seen energy prices come down slowly, but this has been offset by rising food and shelter prices. So, CPI has the potential to top estimates which explains why the markets are on the edge. If inflation, particularly core CPI, tops estimates then this will likely send bond yields higher again as investor bets that the Fed will remain aggressive with rate hikes will rise again. In turn, this should be positive for the dollar and negative for stocks. In contrast, if CPI comes in much weaker than expected, then this will raise hopes that the Fed will proceed with smaller rate hikes and have a lower terminal rate than previously expected.

Regardless of the outcome of CPI, for as long as the Dollar Index holds its own above its long-term bullish trend line circa 109.50, the path of least resistance would remain to the upside. Short-term support comes in at 110.61. Meanwhile the next potential level of resistance is seen around 111.81, which was the base of the most recent breakdown. Above this, the bearish trend line comes in around 113.00. A closing break above 133.00 would mark the end of the consolidation phase that started at the end of September. 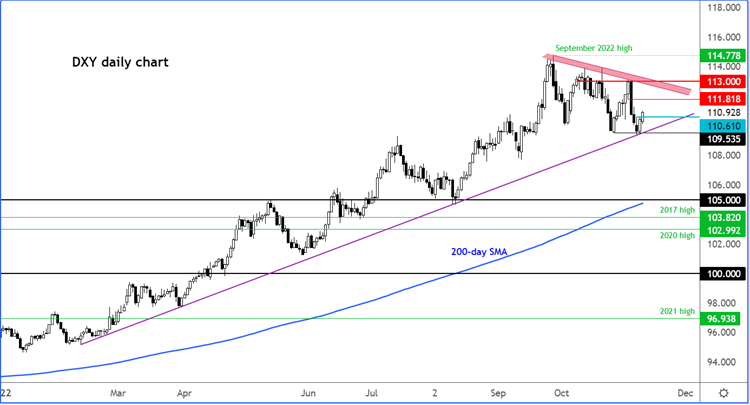