Dollar could find renewed strength ahead of CPI, FOMC

By :
Fawad Razaqzada
,  Market Analyst
The US dollar has been on the backfoot over the last few weeks, giving back some of its past gains against currencies where the central bank is catching up with the Fed in terms of interest rate hikes – most notably, commodity dollars. However, against currencies where interest rates are seen remaining low for longer, the greenback is still looking strong. The likes of the Japanese yen and Swiss franc come to mind. The USD/JPY resumed sharply higher last week after ending its 3-week consolidation. This week, the USD/CHF could be the one to watch out for as the divergence in monetary policy stances of the US and Switzerland grows ever larger.

Fed could hike by 50 bps in June, July and September

The Fed remains the most hawkish of central banks out there, although others are also catching up. On Friday we saw a stronger-than-expected US jobs data for May. The data suggests the US Federal Reserve will continue its aggressive tightening to rein in price pressures.
Speaking of which, we will US CPI to look forward to on Friday, which is going to be the key data the week. US inflation edged a little lower in April to 8.3% but it remains to be seen whether prices have peaked. If CPI doesn’t come down fast, this could keep stocks under pressure as the Fed will have to continue with its aggressive hiking until price pressures come down meaningfully.
The market is fully expecting another 50-bps increase in interest rates on June 15, and another similar hike in July. In fact, Cleveland Fed President Loretta Mester said she would even back a 50-basis point hike in September if inflation has not started to fall back by then. Markets are currently 85% confident that there will be a third 50-basis-point increase in September.
If the Fed and inflation data continue to point towards more aggressive policy tightening then this should keep the dollar supported against the likes of the franc and yen, as well as other currencies where the central bank is expected to pursue a more modest tightening or no tightening at all.

The franc found some support in mid last week on the back of stronger inflation data from Switzerland. But the USD/CHF has risen again, potentially on the verge of resuming the big rally that began in April: 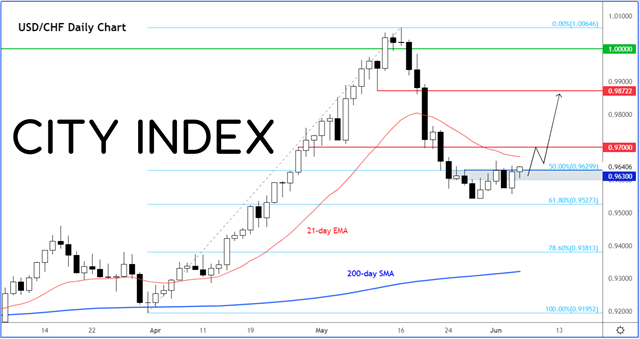 The USD/CHF looks like it has found a new base around the 0.96 handle. The 50% retracement level around 0.9630 is increasingly looking like a pivotal level. A clean break above this level today could set the stage for a rally towards 0.9700 next, a level which was previously support. We may see some hesitation around 0.9700, but if that level also breaks then we could see rates climb towards 0.9870ish, the next line of resistance.

You can trade with City Index by following these four easy steps:
Open an account, or log in if you’re already a customer
Search for the market you want to trade in our award-winning platform
Choose your position and size, and your stop and limit levels
Place the trade
Related tags: Forex Trade Ideas USD/CHF