I remain sceptical about the recovery we have seen across the major indices since Wednesday. Granted, the Bank of Japan’s inaction and mostly upbeat company earnings have bolstered the bull case, there are just too many worries for investors to ignore. Continued choppy price action is likely to dominate the agenda, as investors look ahead to a busy next week when the Fed is likely to hike rates by 50 basis points. In addition, the energy situation in Europe remains unclear after Russia’s decision to suspend gas supplies to Poland and Bulgaria, with Putin again warning that any country interfering in Ukraine will be met with a "lightning-fast" response. Meanwhile growth fears concerning China amid its dogged pursuit of Covid Zero may come back to haunt investors, as cities across the nation roll out swift measures in an effort to keep virus flare ups at bay.

But if you look at price action over the past 24 hours or so, it seems like none of that matters. For now, sentiment has been boosted by some forecast-beating company earnings and after the BoJ decided to defy a global shift towards tighter monetary policy as it vowed to keep bond yields at zero.

Europe’s indices were led higher by France’s CAC with a gain of more than 2% by mid-morning London time, with the German DAX adding 1.5% and UK’s FTSE up a more modest 0.2%. US futures were up around 1% each. Among the companies that beat earnings expectations included Total Energies, Glencore and Capgemini. On Wall Street, Meta gained in afterhours last night as the social media company said Facebook added more users than projected.

Following a sharp two-day recovery, the DAX has now reached a key technical area of potential resistance circa 14050: 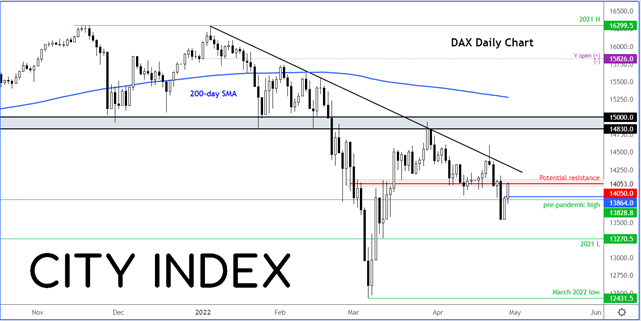 This is where the German index had previously found some resistance and then support in the past, before breaking decisively below it on Monday. Some key technical indicators such as the 200-day average being above the market and pointing lower is indicative of a bearish trend, while price action over the past few months has been typical of a bear market.