Currency Pair of the Week: USD/JPY

Currency Pair of the Week: USD/JPY

This is shaping up to be a potential busy week for the US Dollar.  On Wednesday afternoon,  the FOMC meets to discuss interest rate policy. That evening, Joe Biden will address the Joint Sessions of Congress.  In addition, economic data could cause USD volatility this week.  Also this week, FAANGs will release earnings (minus Netflix).  Expect more of the same this week from Powell and fiends this week (See our Fed Preview here).

At the March meeting, the FOMC noted that the jump in yields was due to an increase in the economic recover and that it was unlikely to last.  Fed Chairman Powell said that their primary focus is to maximize employment. Since then, the increase in yields has stalled and employment has picked up.  However, there are still roughly 8 million jobs that have not been recovered since the pandemic.  Expect more “Wait and See”.

Joe Biden likes to spend!  In addition to his nearly $2 trillion stimulus package and the nearly $2 trillion infrastructure package, on Wednesday evening he is set to speak about his nearly $2 trillion “American Families Plan”.  How does he plan to pay for it?  This has been a sensitive topic for the markets as he is looking to double the capital gains tax to 40% for those making over $1 million (among other tax increases).

Watch the Q1 Advanced GDP this week as well.  In addition, earnings surprises could affect the stock market which would inversely affect the USD. One more thing: $200 billion in auctions this week!

The Japanese Yen may be looking at some volatility itself.  As opposed to the US, Japan has several prefectures back under restrictions due to the spread of the coronavirus.  Tokyo, Osaka, Kyoto, and Hyogo are all under State of Emergency and the vaccine rollout remains well behind that of the US and UK.  Remember that the Summer Olympics are set to begin in less than 90 days!

In addition, the BOJ meets on Tuesday.  As discussed in the Week Ahead,  at the March BOJ meeting, the central bank announced several monetary policy initiatives,  including widening the band around the zero target on the 10-year JGB from 20bps to 25bps.  As this was meant to show that the BOJ is doing “something” with stocks at post-pandemic highs,  the committee will most likely wait for more data to see if their recent actions are working.

Complete Guide to the Bank of Japan 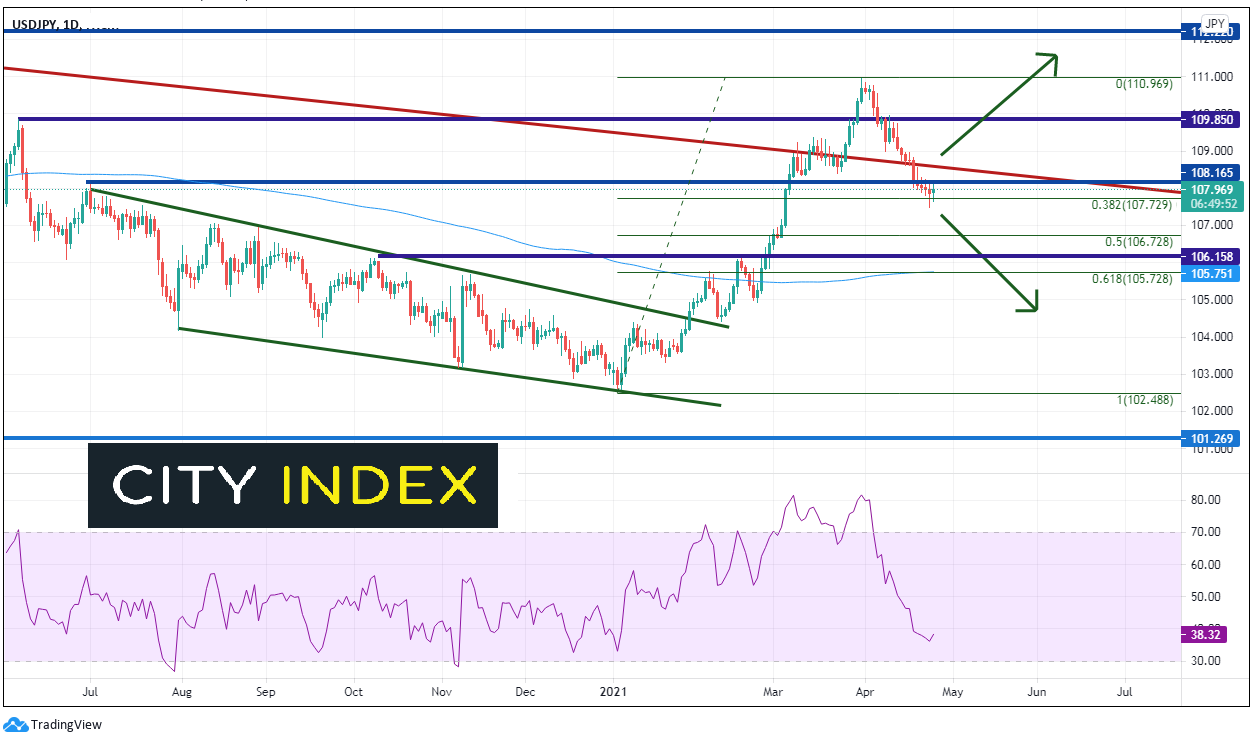 From January 6th through March 31st, USD/JPY had been on a one way move higher.  Before that, the pair had been moving lower in a descending wedge formation and broke higher out of the wedge on January 29th.  USD/JPY reached its target of a 100% retracement of the wedge on its way to the March 31st high of 110.97.  Since April 1st, the pair has moved aggressively lower to the 38.2% Fibonacci retracement level from the January lows to the March highs near 107.73.  On Friday, the pair formed a hammer candlestick, indicating the possibility of a reversal.  Resistance is at the long-term trendline dating back to June 2015, near 108.50.  If price moves higher from there, it will prove a false break below, as well as a shallow retracement (to only the 38.2% Fib level).  This could open the door for a move higher.  109.85 is horizontal resistance, followed by the March 31st highs at 110.97.  Support below is at the 50% retracement level from the previous mentioned timeframe near 106.73, horizontal support near 106.16, and the confluence of the 200 Day Moving Average and the 61.8% Fibonacci retracement level near 105.73.

With both the FOMC and BOJ monetary policy meetings this week, USD/JPY has the potential to be a big mover this week.  In addition, anything that affects US yields (such as the auctions) should also affect the direction of the pair due to their correlation.  Also, continue to watch the coronavirus and vaccine supply in Japan, which could add volatility to the pair.