Crude oil off lows after slump

Investors are growing concerned about a sharp economic slowdown. Earlier, we were witnessing yet another risk-selling day in the markets. Dollar was up. Stocks were down, along with the euro, copper, and crude oil. The latter fell to levels not seen since Russia’s invasion of Ukraine started on 24th February. At its worst, WTI crashed over 5% to fall below $90 a barrel, while Brent fell below $94, before both contracts recovered off their lows. As session wore on, other risk-sensitive markets also recovered, with the EUR/USD climbing back above parity after a brief breakdown.

Oil has been the last major risk asset to start falling, as the supply was previously very tight. The supply is not plentiful yet, but concerns that demand is going to weaken is what is driving prices right now. Earlier in the year, it was all about concerns about supply, but that is less of an issue now. Many developed economies are experiencing very high levels of inflation, low or negative economic growth, falling consumer sentiment and slumping exchange rates.

Wednesday’s publication of the latest consumer inflation data has further raised the risks we will witness further aggressive monetary tightening from the Fed, something which many fear would tip the world’s largest economy into a recession.

The focus for oil and other investors will turn to the latest Chinese and US data, due for release on Friday. Fears about fresh covid-related lockdowns at the world’s second largest economy has already hurt sentiment. If on top of this, we now see disappointing economic data then this will further reinforce expectations of weak Chinese demand.

China’ second quarter GDP is expected to print +1.2% compared to the same period a year ago, slowing sharply from 4.8% record in Q1. Industrial production is seen rising 4.0% y/y, while retail sales are expected to have rebounded 0.3% y/y after a sharp 6.7% drop the month before.

From the US, we will have retail sales, industrial production and UoM consumer sentiment, among a handful of other macro pointers. 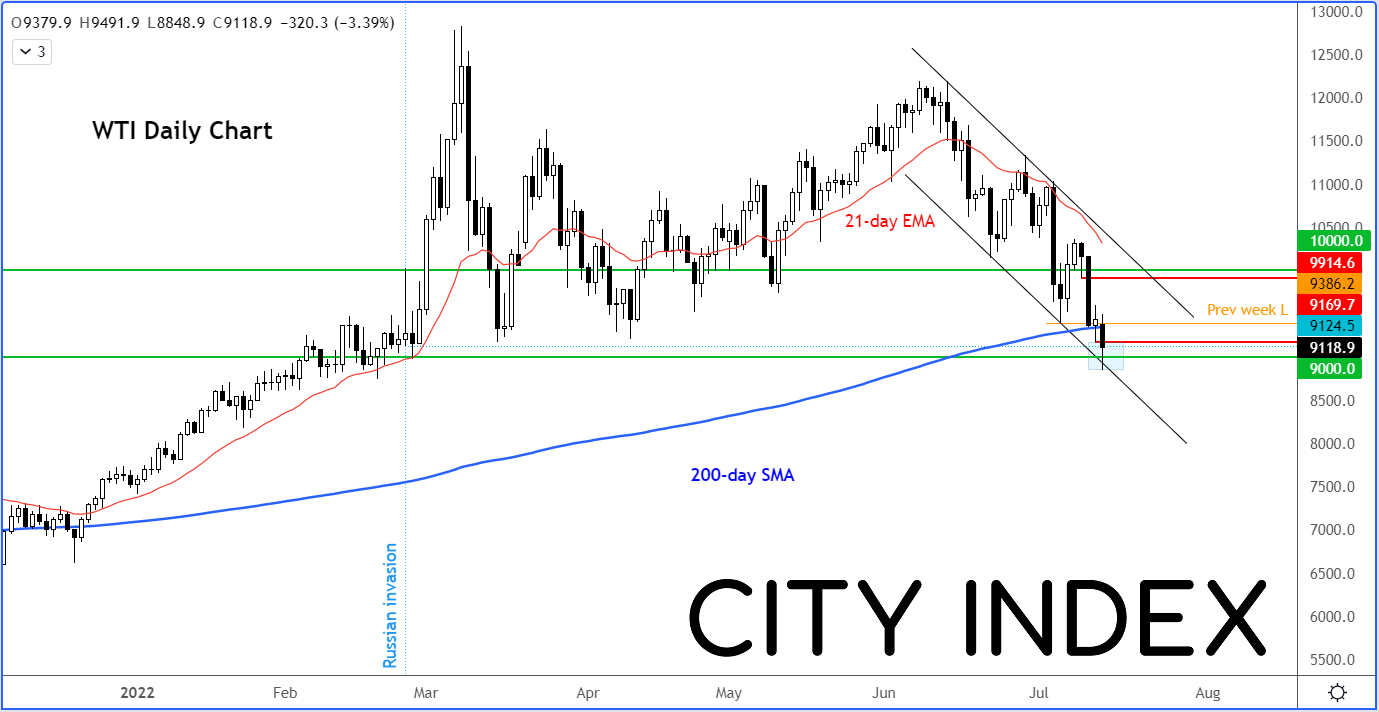 With WTI testing liquidity below the 200-day average and support trend of the bear channel, after an extensive fall, there is the possibility we will see a rebound of some sort. It will be a bullish scenario if the 200-day average is reclaimed. If so, a return towards the next zone of resistance at $99 to $100 could then be the outcome.

However, if the bulls fail to reclaim the 200-day average, we could be talking about $85 soon.